Vesa Gustavsson Doesn't Apologize. Leaves That to His Fans

Share All sharing options for: Vesa Gustavsson Doesn't Apologize. Leaves That to His Fans

"Superstar NHL caliber goalie Gustavsson was given the challenge last night of matching up against one of the greatest goalies of all time on a surging Devils team in order to keep the Leafs playoff chances alive! The bounces went against our Boys in Blue on the night, but if not for Gustavsson, Toronto would have left the ice with no points instead of a much needed 1!"

One of the most over-valued, over-protected and over-used Leafs in recent history tripped on his way into the winners circle Tuesday night, falling fantastically onto his sword for the final time in a beautiful sweater with a certain Leafy motif. The Japanese have a name for such a ritual. They call it "切腹" or Seppuku. The only difference is they use it to save face and honour by not giving in to their enemies, and Gustavsson did it to secure a good laugh from the internet guy with "Losers Since 67" written on the back of his jersey.

Done now for good is any notion of Gustavsson's position as Maple Leafs possible #1 goalie. Necessarily going with it are the hopes, dreams and excuses of the throng of Leafs logicians who ignore little things like objective analysis, stats, and the power of love to insist that Gustavsson is anything but a sometimes good back-up goalie. In the Swedish Elite League.

These fans are surprisingly large in number, emboldened by Gustavsson's wonderfully annoying habit of making insane 10 bell saves fairly frequently. But these apologists always come to praise Gustavsson, not to bury him; They quickly renounce prototypical bad Gustavsson goals as "flukes" or "a bad bounce" or "Luke Schenn's fault". Any honest Gustavsson reel would show reams of goals going through a gaping five-hole or trickling through on the short side, always coming at a crucial time when the team really needed him to make the stop, ie: every time. 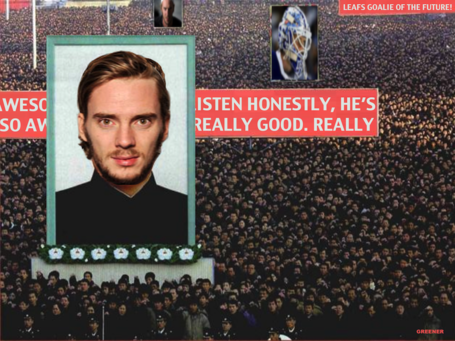 The Cult of Gustavsson, seen here gathering in Maple Leafs Square (and PPP comments sections), is saying to themselves, "Wait a sec Greener, haven't we heard this before?!" And the answer is yes, I was yelling this at you last November. "But wait", you now aren't saying, "Greener, what do you know that we don't?" Well, besides Chemmy's home phone number and the combination to PPP's bike lock, the answer is nothing much, really. I just think that being brutally honest with the Leafs and the performance of its players is one of the hard-won awards of following a team like the Leafs. We always have to view them through an honest, flaw-free prism. Just remember, thinking critically like this is one of the things that separates us from the animals, and by that, I mean Canucks fans.

Continue to look at my flaw-free prism @Le_Greener