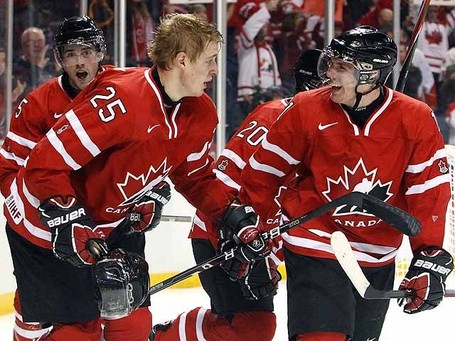 Can you believe Burkie traded for me and I'm not even American?

The Keith Aulie Era in Toronto is over as he has been traded to the Tampa Bay Lightning for prospect Carter Ashton. This move is likely driven by the emergence of a number of young defencemen with the Marlies as well as Keith Aulie not being very good at defence.

Actual analysis after the jump:

What Are The Leafs Getting

First up, a couple of scoring reports. From the SBN Scouting Report:

Ashton has developed into a consistent two-way performer and has quietly impressed scouts. Ashton possesses pro size and has demonstrated that he understands and accepts his role. A polished player with regards to the defensive nuances of the game he has added some offense to his game and drives to the net hard. Ashton's skating technique may need to improve as he advances to higher levels. Ashton is the son of former NHL winger Brent Ashton, who played 998 regular season games in the NHL.

Ashton will have an opportunity to win a roster spot with the Lightning in camp but will likely return to juniors for at least one more season. He is still developing in terms of skating, technical skills and offensive instincts but he has the desire, size and strength to be a successful power forward at the NHL level. He has the upside to be a top line player if he develops a complete offensive game.

Carter Ashton's father Brent was an NHLer (284-345-629, 998 GP) so he has some pedigree which kind of makes this like the Blake Geoffrion deal! For what it's worth, the most common descriptors used on Ashton as that he has good size and knows how to use it and that he skates well. Not for a big guy but well so that is encouraging when you start looking at the Leafs' depth at forward. He'll join a young group that includes Matt Frattin, Nazem Kadri, and Joe Colborne. Depending on how Brian Burke decides to cull the big club those are four guys that will be competing for full-time spots next year. I'd love to see them eased into the NHL as a kid line used against easy competition.

His NHL equivalency figures provide some insight. Remember that one assumption is that these are based on the players being used in similar roles and are based on looking at players that have made similar leaps. What I've done below is taken each player's goals, assists and points, converted them to a "per game" rate, multiplied them by the league equivalency number, and then expressed them as an "NHL equivalency" assuming an 82-game season. I've used this article for the translations from the AHL which gives us a value of 0.44.

Carter Ashton certainly seems to play a game similar to Matt Frattin's in that he skates well, uses his size, crashes the net, and has some good hands at the AHL level. He can play either wing which is good long-term to give the Leafs flexibility. As Mirtle notes, he's still in the AHL at this point because he is a bit raw.

What The Leafs Are Giving Up

When Brian Burke completed the Phaneuf deal two years ago Keith Aulie was mentioned as a piece that he had to have. Like Ashton he had been on Canada's World Juniors team and had paired with Tyler Myers in shutting down the rest of the world. His stints with the Leafs were uneven. His first was poor, his second was strong, and his third was poor. Even more disconcerting was that after the strong end to last year he was unable to make the team out of camp this summer. In our Top 25 Under 25 ranking Aulie was 10th but it's worth noting that we voted before his call up this year. Clearly we still had a lot more confidence in his potential going forward.

Michael Farber was just on TSN making some pretty funny comments about Aulie. He noted that last year when he played with Phaneuf that he looked like he could form part of a top shutdown pairing. I guess he only watched games after the trade deadline. He added that Aulie came into camp with a sense of entitlement and that was part of why he was cut.

However, Aulie's good luck last year was written about in depth. Cam Charron looked at the glaring differences in Aulie's two call-ups and found that a lot of the uptick in his box car stats could be traced to the strong play of James Reimer. This past September, Jonathan Willis pondered the question of whether Keith Aulie was ready for a top four role as was suggested during training camp. The conclusion, Aulie gave up the most shots on the blueline and benefitted from the best on-ice save percentage by a mile.

This past season has been by all accounts really rough. He's usually been the Marlies' worst defender and he has been passed by a number of players including Korbinian Holzer (#15 PPP Top 25 Under 25) who Marc Crawford noted had likely passed him in the depth chart among defensive defencemen. We had previously wanted to see him get a shot at the NHL after a number of call-ups to check out the press box amenities. He needs to be re-signed this year to get a shot but Aulie moving clears one hurdle. A fresh start in Tampa may be just what he needs. He may yet become a quality NHL defencemen but he's a guy that will soon lose his ability to pass through waivers so a long-term decision had to be made.

In Ashton, the Leafs simply add another player that may help fill out the bottom half of the Leafs' roster down the road. If you can get those spots filled more cheaply then that makes it easier to pay your top six talent. The emergence of some of Carter or his new cribmates would help, along with canning guys like Colby Armstrong, free up cash to re-sign Mikhail Grabovski this summer. All in all, it's the classic "new situation" trade. Hopefully, it pans out.