After this morning's post from Steve (in case you needed something to depress you) there's probably one pressing question that you are asking yourself right now: How many coaches have missed the playoffs four years in a row? Well, Old Man Forbes was going through his back catalogue of The Hockey News on microfiche and came across the answer. As you might have divined by the title, there have been, by Forbes' candelit reckoning three coaches that have missed the playoffs four times in a row with one team. 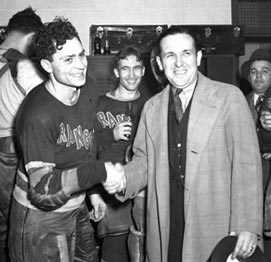 With this Cup win, I`ll never get fired

Frank Boucher is, it turns out, a fascinating individual. He is a Hall of Famer from the pre-World War II NHL that won the Lady Byng as a Ranger seven times and was a four-time all-star. Joe Pelletier has a great look at his place in that era but what caught my eye was his coaching prowess:

While best known as a player, it should be noted Boucher later coached the Rangers and captured the Stanley Cup in his first season as a coach. His coaching record isn't great as his team was decimated by War and struggled for years to regain elite status. Boucher's biggest problem was he never had a player as good as he was. He was an innovative coach. He developed the now common box penalty kill formation. He also was the first coach to pull his goaltender for an extra attacker.

He is actually one of two men on this list to make it to five years without leading his team to the playoffs. I guess winning a Stanley Cup buys you some rope. He made it to the semi-finals the next year so maybe we just need to be even more patient. Of course, astute observers will not that that achievement is diminished slightly when it's just a proxy for 'making the playoffs'. 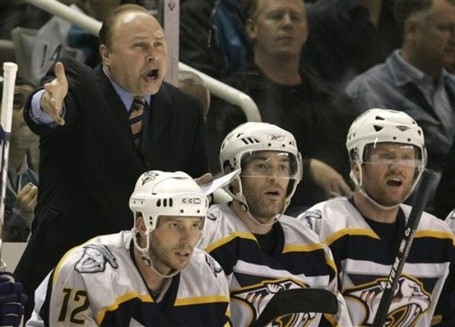 Fire me? Have you seen my budget?

Second on the list is a contemporary of Ron Wilson who also made it five years without seeing the playoffs without being fired. In fact, he's the only coach the franchise has ever known. Yes, that's right, the five years he missed the playoffs were the franchise's first five years in the league so you might argue that he was building from scratch in much the same way as Ron Wilson has had to do in Toronto after JFJ's Reign of Error. Of course, if you dig a little deeper you'll see that after that rough start, the team has made the playoffs seven of eight seasons (including this year) and topped 100 points three times with a good shot at making this year his fourth. So maybe this is a good example of the value of patience...until you remember that Nashville's been doing it with smoke and mirrors and under the threat of relocation (not that relocation rumours or trade deadline rumours have any impact on the NHL's hockeybots). 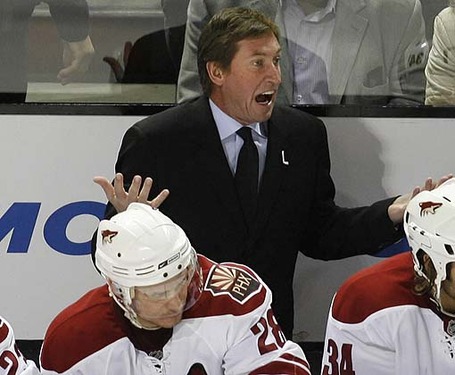 WHAT PART OF "PLAY LIKE ME" DON'T YOU DIMWIT DOGS NOT UNDERSTAND?!

And finally we come to a true comparable for Ron Wilson. The Great One's career as a player needs no introduction. One of the greatest players to ever lace them up decided that he wanted to coach so what better place to begin than as a head coach. After all, isn't parachuting into the league how he got into the NHL in the first place? Luckily, the job came along with a bit of ownership in the franchise which likely extended his job. It also meant that he was able to hire all of the Friends of Gretzky to management positions. Minus the ownership, that last bit kind of sounds like how Ron Wilson is holding onto his job. Of course, Wayne's failure provides a glimmer of hope as he is apparently the only coach to have missed the playoffs with one team to get canned.