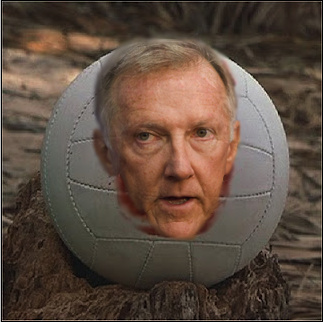 I'm sure there will be those that disagree with me but I think that the overwhelming majority of our regulars around here see the writing on the wall. Ron Wilson is probably going to fail once more to drag this team to the Stanley Cup playoffs and it's probably going to cost him his job. And so it should.

While in previous seasons, we have been able to dismiss the team's shortcomings on the basis of inadequate on-ice talent, this season, the Leafs were in a wonderful position to play hockey beyond April. While it's true that poor Ronnie Wilson has received some atrocious goaltending throughout his tenure, I have become increasingly less willing to make excuses for the rest of the team's performance.

For an uplifting take on the state of Leafs affairs, check out the latest Leafs Nation podcast, where I was joined by Danny Gray and our very own Chemmy. It was recorded the day before trade deadline day, though, due to what we'll call 'technical difficulties', we've been unable to publish it until now.

I* think that PPP is in fine form in this look at last night's game and how ridiculous the media in this town can be.

The 'good news' list is a pretty short one, so we'll take what we can get. From the CP via the Globe.

The People Have Spoken. Wilson Needs to Go.

Laura Astorian at Puck Drunk Love points out that Cathal Kelley of the Toronto Star wants us to lay off Wilson.

Despite another loss, looking for a guy who cares? I’ll say Luke Schenn

Michael Langlois has a few thoughts on the game last night at Vintage Leaf Memories.

Not since 1939 have Canadiens fans witnessed such a disappointing season. So that's good. From Sean Gordon at the Globe.

The growth of James van Riemsdyk

Think the Leafs should acquire JVR in the off-season? Eric T. takes a look at his development over at BSH.

Who’s the bad guy in the Nash/Howson beef?

Ryan Lambert at Backhand Shelf says 'no one'.

*This was added by PPP...allegedly