Cox Bloc Presents: No We Can’t!

Share All sharing options for: Cox Bloc Presents: No We Can’t!

Let’s travel back to November 2008. The realization is beginning to set in for most of us that a bunch of Greedheads in lower Manhattan have flushed the world economy into the Hudson River. A school collapse in Haiti kills nearly 100 children, while an accident aboard a Russian nuclear submarine takes the lives of 20 people. To top it all off, the Large Hadron Collider has just gone online, making it only a matter of time before our entire universe is crushed into a man-made singularity. The Doomsday Clock is at 11:54 pm.

But it isn’t all bad news. Guns N’ Roses release their first new album in a generation and Sony announces that they will be issuing a 2 Disc special edition of Step Brothers in time for the Christmas shopping season. Most importantly, the world watches with wonder as a once proud and successful Nation turns to a saviour who could pull them from an ugly death-spiral that began in earnest in the 80’s, but really started gaining speed in the new Millennium due to historically incompetent leadership.

This saviour – merely a man, but one in who so many place so much faith – speaks eloquently of his vision to rectify the mistakes of the past. His promises of Hope and Change are taken to heart by millions. Even the cynical press corps responds positively to this charismatic messiah, aiding his ascension to the top through a type of media-cheerleading usually reserved for war-time or the sports pages of the Ottawa Sun. His eventual coronation is met with tears of joy and dreams of glory.

So, nearly four years later, where did it all go wrong?

So, nearly four years later, has anyone seen Brian Burke and Barack Obama in the same room together?

I mean, Christ, look at those similarities. The timing is uncanny – Burke and Obama landed their current jobs within 25 days of one another. Neither of them would have been hired if not for the idiot that came before them and both had to start their gig by digging themselves out of a hole halfway down to the Earth’s molten core. Obama‘s regime has been tarnished by the lack of a clear and consistent message: Ditto Burke (remember Pugnacity, Testosterone, Truculence and Belligerence?). Both appear to repel elite NHL goaltenders. Neither can seem to get control of the centre.

There are some differences of course. Obama kills the enemies of America with extreme prejudice (and without due process), while Kerry Fraser and Jim Hughson are still walking around without a scratch. Burke is progressive on gay rights, was born in the USA, and only has one crazy old white guy who regularly attacks him on television. Regardless, the similarities seem to be endless. We’ve started a list:

Put any others you can think of in the comments. Once we have a complete list...we can figure out what it means. 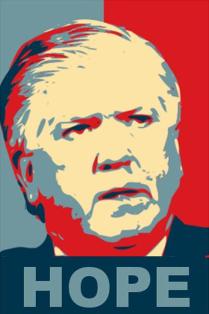