Cox Bloc Presents: Did Craig Simpson Really Refuse to Play for the Leafs?

Share All sharing options for: Cox Bloc Presents: Did Craig Simpson Really Refuse to Play for the Leafs?

Saturday nite, during another nasty and pointless Battle of Ontario, Mikhail Grabovski waded into harm's way to protect rookie teammate Carter Ashton by fighting Chris Neil. Grabovski's courage in fighting a much larger opponent fired up his teammates and inspired Leafs fans, giving us one of the only displays of pride and passion we've seen while this team has circled the bowl for the last two months. 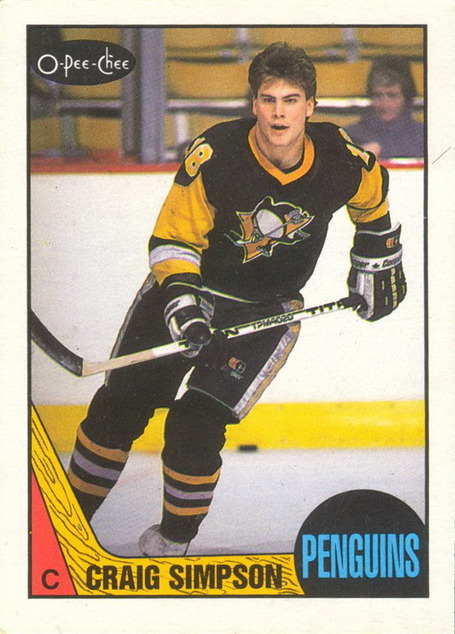 Hockey Night in Canada analyst Craig Simpson didn't see it that way. During the replay of the clip, Simpson ignored Grabovski's courage or Neil's bullying cowardice. Instead, he spent a long time complaining that because Grabovski, who almost never fights, did not have his jersey tied down, he should have been ejected from the game. While this is tiresome garbage, Leaf fans have come to expect it from Simpson. After all, everyone knows Craig Simpson hates the Leafs. In fact, when he was in his draft year, he told the team not to draft him because he'd never play in Toronto, right?

What DOESN’T make sense is having announcers who clearly DON’T like the team they’re calling. Craig Simpson told the Leafs he would never play for them if they drafted him first overall. Jim Hughson is a Canucks homer of the highest order. Why these two guys get to call the Leafs on HNIC is exactly why you should cheer for TSN or Sportsnet to win the HNIC contract from CBC as soon as possible.

only because Craig Simpson said he’d refuse to play for Toronto if they drafted him first overall.

Craig Simpson explicitly stated he didn’t want to play in Toronto so fuck him.

"Craig Simpson wouldn't play for the Leafs" has become an accepted part of Leafs lore, like "Kerry Fraser screwed us in 1993" (true) and "Todd Gill was a disaster" (a terrible lie). But was that really how it went down? Come with me, dear reader, on a journey to a time where tickets in the greys cost $6.50, and Leaf fans staring down another lost season could find hope in one of the league's top scorers (Rick Vaive), an elite D prospect (Al Iafrate) and the top pick in the NHL draft. I know, I hardly recognize it either.

Craig Simpson was rated as the consensus top player available in the 1985 draft, although he was not seen as anywhere near the calibre of the previous year's choice, a lanky chainsmoker of electrifying talent named Mario Lemieux. Still, an article in the Globe a month before the draft claimed the Leafs had "just about decided" to make Simpson, who had starred at Michigan State the year before at just 16 years old, the #1 pick.

But a week before the draft, reports emerged that a meeting between the Simpson family, Leaf GM Gerry McNamara and coach Don Maloney had been a disaster, and that Simpson did not want to be a Leaf. While McNamara publicly claimed the Simpsons "did not say no" to playing in Toronto, it was now expected the Leafs to take a rugged defenceman from the Western league... Dana Murzyn. It was later speculated that the Simpsons had expressed concern about Leafs owner and legendary fruitcake Harold Ballard and the general instability of the organization. It was also rumoured that the Simpsons wanted to dictate to the Leafs who Craig's linemates would be. These reports were denied by the Simpson family.

Two days later, the story took another turn. Under the headline "Maple Leafs Make Up With Simpson", the Globe reported that a second meeting had "smoothed over the rough edges" and that, provided a contract could be worked out, Craig would play in Toronto. According to McNamara, Craig said he'd be happy to put on the blue and white. . Simpson said: "I had a lot of negative feelings about that first meeting and people told me a lot of negative things about Toronto. So it was tough going. Went back with a more open mind the second time." On draft day, Simpson was widely expected to be the Leafs pick. 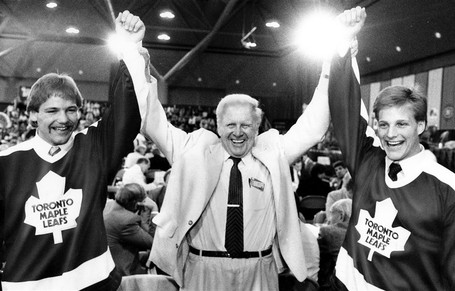 Instead, the Leafs chose that tough defenceman from Western Canada, but it wasn't Dana Murzyn, it was Wendel Clark, described as a "punishing hitter and enjoys the rough going" who "said he was enthusiastic about joining the Leafs and wasn't worried about the Leafs poor record over the past several years" Given the parlous state of the 1985 draft (other top picks included Murzyn, Jim Sandlak, and Brent Fedyk), the Leafs made the right choice. Given that they whiffed on every single other pick that year, it is likely that getting it right was dumb luck, perhaps aided by the Simpson family's lack of enthusiasm for Craig playing in TO. (The Leafs other picks that year: Ken Spangler, Dave Tomlinson, Greg Vey, Jeff Serowik, Jiri Latal, Tim Bean, Andy Donahue, Todd Whittemore, Bob Reynolds, Tim Armstrong, and Mitch Murphy).

Simpson was "overjoyed" to become a Penguin, according to the Globe. He "was not disappointed at being passed by the Leafs. In fact he said he was relieved that the Penguins had taken him.... After, Simpson said it was a good situation both ways but he 'definitely felt comfortable with Pittsburgh. I was impressed with Johnston and the organization right from the start."

So, did Simpson say he wouldn't play for the Leafs? No. Not publicly, anyways. As is so often the case, digging into the past makes the story more complicated, not less. Craig Simpson emerges as an assertive, intelligent young man with more than a bit of an ego. He told the Leafs that if they were trading the #1 pick, he'd want them to trade it to Pittsburgh. He said things like: "I was hoping they would say 'Craig Simpson'. I was definitely relieved when my name came up." (in the 1980s, referring to yourself in the third person meant you were really cocky, Bo Jackson, or both).

There is some circumstantial evidence that, despite their denials, the Simpson family did make some demands on the Leafs. On draft day, it was reported the Leafs had been in discussions with Simpson's brother Dave, a former CHL player of the year and Islanders draft pick who had never made it as a pro. After the Penguins drafted Craig, they invited Dave to camp, but he didn't make the team. Was another shot for Dave a condition of Craig publicly agreeing to go to Toronto?

For the record, despite the vitriol inevitably directed at any young player who tries to manipulate the machinery of the draft to put himself in his preferred situation (see Lindros, Eric) I have absolutely no problem with it. The draft is a system that binds a young player's future to an organization and city he cannot choose, an organization that may squander his potential through incompetence. If any 18 year old wants to stand up to the teams, the league, and the media that invariably carries the league's water in these situations, more power to him. Craig Simpson probably didn't want to play for the Leafs. Given the state of the Leafs (and the fact that the other choice involved playing with Mario Lemieux) I wouldn't have wanted to play for them either.

Oddly enough, this was the second straight year the Leafs had been involved in a pre-draft controversy with a highly touted prospect named "Craig". Canadian Olympic defenceman Craig Redmond was one of the top prospects available in the 1984 draft, in which the Leafs held the fourth overall pick. It had been another lost season for Toronto. Previewing the draft, Al Strachan chided those who had mocked Ballard's preseason prediction that the Leafs would finish fourth or fifth overall... because on draft day, that's exactly where they'd be.

Where they were was in prime position to choose Craig Redmond, a prospect that greatly worried Craig's parents. Craig's parents wrote a letter to the Leafs saying if drafted by Toronto, Craig would return to college because the Leafs "can't get anything going". (I sure hope Mr and Mrs Galchenyuk don't read this post.)

The letter cited Jim Benning and Bob McGill's lack of development, and argued that "Toronto has had some very good players like Lanny McDonald and Darryl Sittler. But if they couldn't do anything in that organization, Craig sure can't. What we want for our son is a future. He's not asking for a lot of money or anything like that. … The only place worse is Vancouver, which we wouldn't touch with a ten foot pole. You stay out of the hotbeds."

Leafs GM McNamara alleged the letter, which became public after it was leaked to the Toronto Star, was orchestrated by Redmond's agent, Alan Eagleson, in an attempt to show up the Leafs. As should be obvious by now, it hardly required an elaborate plot to embarrass the organization at this juncture. Take McNamara's response, for example: "The first thing that comes to my mind is that many people have told me his father builds him special skates to make him look taller on the ice, that stands out in my mind." Classy. Anyways, the Leafs chose Al Iafrate, who would be ten times the pro Redmond was. Redmond was chosen sixth by the Kings and would play less than 200 NHL games.

It seems that Craig Redmond's public refusal to play for the Leafs, followed by Craig Simpson's quite obvious preference to play elsewhere, has melted together in hockey memory as "Craig Simpson said he wouldn't play for the Leafs." Which is not really true. Still, the story ended happily for almost everyone. Simpson won a couple of Cups, Wendel Clark became a Maple Leaf legend. It would have all worked out almost perfectly, if Leaf fans didn't eventually have to listen to Craig Simpson grinding his axe in the broadcast booth every Saturday nite.