Mathematical Elimination Hangs in the Balance

Share All sharing options for: Mathematical Elimination Hangs in the Balance 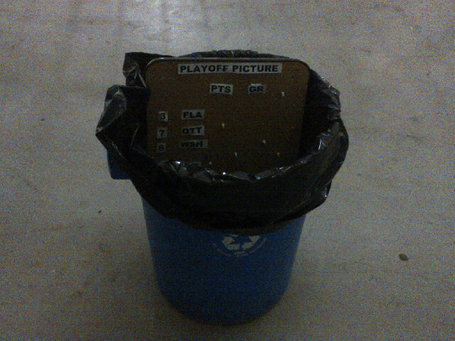 After an abysmal Februdreary and a equally craptastical Death March, the Leafs find themselves going into tonight's game with the possibility of being mathematically eliminated from the Playoffs should they lose. Already, 6 teams have guaranteed themselves to finish ahead of the Leafs: NYR, PIT, PHI, BOS, NJD, and OTT. And right now, the Playoff Death Numbers for Florida, Washington, and Buffalo sit at 1, 4, and 4 respectfully, and because Washington plays both Florida and Buffalo before the close of the season, they might as well be 1, 2, 2 at best. Either way, the best number there is 2, the same number of points up for grabs tonight in Toronto against the Carolina Hurricanes.

Now I know what you're saying, that this team missed the Playoffs weeks ago and it's just taken the buzzards awhile to pick the bones clean, and you're right. But as Mirtle wrote yesterday, only now is the team coming to terms with missing the Playoffs for a 7th straight season.

Throwing in the towel isn’t an option – even if a large portion of the fan base would love to see the Leafs land a top-five draft pick.

Of course you can't simply forfeit games or throw them, but this team needs to realize the Playoffs aren't going to happen and that it's time they start playing like they've got nothing to lose. Because, quite simply, they don't.