Share All sharing options for: Death Numbers for Death March

Death March is upon us. The long, painful road to either the Playoffs or the draft lottery now lies before the Leafs. Despite the worst 10 game stretch of any team so far this season, the Leafs are somehow only 3pts back of 8th with a game in hand. I know, I'm confused by this too. I guess the explanation lies somewhere in the middle of a) salary cap induced parity, b) Western domination over the East, c) Washington pooping the bed against the rest of the SE, and d) the Leafs not being able to put this thing away by going .500 thru February.

With the regular season ending in 33 days, I figured it was time to bust out the Death Number Calculator of DOOM! It tracks the number of points that a team needs to gain, or the Leafs need to lose, that would make catching that team a mathematical impossibility. Can the Leafs stave off hearing the playoff knell for a 7th straight season by beating out 7 other teams? Let's find out: (Spreadsheet will be updated daily here. Death numbers post day after every Leafs game.) 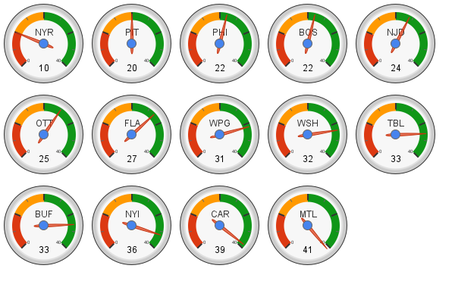 Western Conference to be added tonight.