Aside from Washington losing in OT instead of regulation, last night's game went exactly how the Leafs needed them to. Except for that whole losing their own game thing. That one stung. The Leafs need an 11-5 record from here on out to hit what looks to be a truly abysmal 89pts for entrance to the Playoffs...something I'd feel a lot more optimistic about were they not facing the hottest team in the league tonight.

I liked it better when the Sabres were sitting in the basement and everyone count point at laugh at Terry Pegula for over spending on stiffs. We can still point and laugh, but they're only 4pts back of Winnipeg and playing a whole lot better than the Leafs. It's go Leafs South tonight!

Brad Thiessen sucks right? He better because Gu5tav55on is in net and the Hart Trophy favorite isn't going to be wearing the same color jersey.

Your Death Number update after the jump. 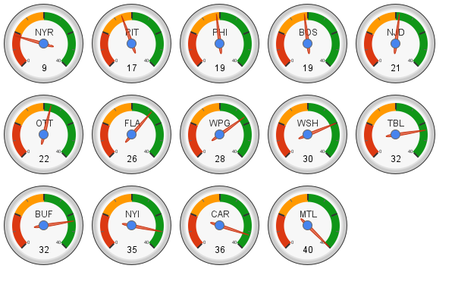