This is probably news to most of us Leafs fans but the NHL playoffs begin tonight. Just kidding, we're reminded constantly of that fact by every Tom, Dick, and Asshole. We get it, the Leafs have been a special kind of awful in an era in the NHL when they didn't have the benefit of the Minnesota North Stars or divisional playoffs like they did in the 80s.

The other yearly tradition that kicks off tonight is the clichéfest that passes for coverage and analysis of the game by the mittenstringer army or as stock answers from the players. The playoffs as an entirety are too short for many of the things that separate teams over the course of a season to assert themselves let alone over seven games. Ask Washington about how a hot goaltender playing over his head mixed with poor puck luck can combine to derail a promising season.

Still, a bevy of familiar 'reasons' will be trotted out and Old Man Forbes wanted a way to keep track of just how prevalent these tropes were.

Of course, his method of tracking was bingo. I'm sure a single tear was shed on the day that old school bingo died in Ontario with the smoking ban. I'm surprised he didn't devise a way to use an abacus. 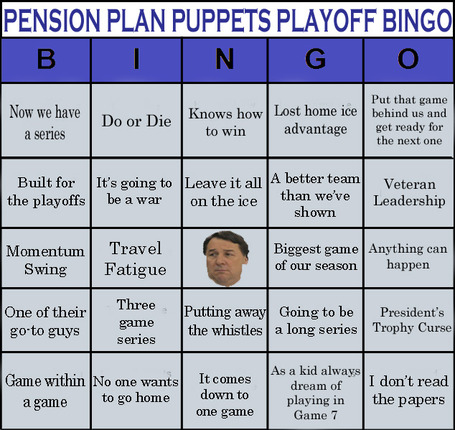 Drinking games may be de riguer among the younger set but Old Man Forbes is a responsible parent and knows that when you're dealing with clichés and the media that you don't want to be responsible for putting somebody in the morgue. However, if you were so inclined I'm sure you could take a drink for every one of the squares you fill and pound your drink once you get a bingo. You'll definitely be able to play this every night.

And yes, Mike Milbury saying something dumb is the free square.