A Little Bit of Comeuppance

Share All sharing options for: A Little Bit of Comeuppance

(Not Leafs related, but whatever.)

If you're on Twitter and for some reason follow Michael Yormark, president of the Florida Panthers, than you know that he's...well frankly he's a dick. On multiple occasions he's resorted to childish name calling against those who have expressed their dislike with some of the Panthers' goings on. Like this one here.

But as Puck Daddy pointed out yesterday, this was Yormark as his most dickish: 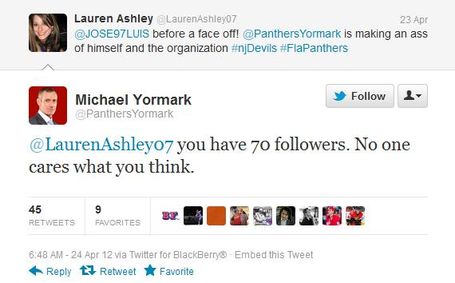 Funny think about being a dick, everyone wants you to get your comeuppance. Take the jump to find out how you can contribute.

So being very decidedly not a dick, Wyshynski came up with this idea: 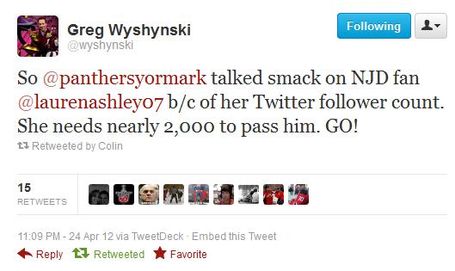 Yup, that's right. Mr. "LOL look at how few followers you have! LOL!" has 3,204 followers. To put that into perspective, Brian Burke, president of the Maple Leafs, 102,810 followers. It appears the Panthers' tweets are just as boring as the hockey they play. Right now Miss Lauren Ashley has 846 followers, up from just 70 this morning. You all know what to do. As trivial as this all sounds, and frankly is, at least it'll piss off some giant dick...which is really what the internet is all about.

Now on to your links.

There's a special Hell reserved for band-wagoners and those who talk at the theatre.

Mike looks back at what should have been the Wings' year.

A Changing of the Guard in the NHL

Behind the Scenes at Raffi Torres' Suspension Hearing

Surprisingly it's not just a bunch of yelling.

Tell me you aren't tempted to wear this with one blue and one yellow sock. I'm going to do that and them light my stick on fire.