Why Signing a Veteran Goalie May Not Help

Share All sharing options for: Why Signing a Veteran Goalie May Not Help

Entering this off-season, it was obvious the main weakness of the Leafs has yet again been goaltending. Despite praise worthy statistics in the back half of the 2010-11 season from James Reimer, leading to a nice RFA contract for the young starter in waiting, the Leafs net was anything but solid in 2011-12. Adding a free agent or trading for a veteran may seem like the right thing to do.

The Anaheim Ducks have just signed Viktor Fasth of the SEL to a 1 year, $1 million, 1-way contract, basically hoping to catch lightning in a bottle with the Swedish National Team netminder and MVP of the World Championships and SEL from 2010-11. The Leafs were hoping for the same in recent years when they signed up European UFA goalies Jonas Gustavsson, Jussi Rynnas and Mark Owuya.

This past year, Gustavsson again received the majority of starts for the Leafs, and while he improved over his previous season, his totals were still far down the NHL rankings for goalies with 30+ gp. In fact, amongst goalies with 90+ gp over the past three NHL seasons, Gustavsson ranks 37th of 38 goalies in SV% with a .900. The only goalie with worse numbers is Columbus Blue Jackets starter Steve Mason, who has an .899 SV%.

Ben Scrivens is parlaying the starting gig with the Marlies into a decent stretch, and has been one of the top goalies in the AHL for two years running. Unfortunately this really only prepares him for life as an NHL backup in the immediate future, as taking over the reins as an NHL starter directly from the AHL isn't necessarily guaranteed to work out for the best either. James Reimer's situation is testament to the speed bumps that can occur along the way.

This dilemma has led to many (if not all) Leaf fans fervently advocating for a veteran solution to be brought in and backstop the Buds to a playoff spot. Unfortunately we've been down this road before and there's little to no guarantee that this will provide a solution to the Leafs problem. Follow after the jump for a bit of a dissection of this situation.

So the Leafs options are to trade or sign a veteran goalie to either act as a back up or split starts with Reimer in the upcoming season. The veteran would need to be both a steady hand and a guiding influence, possessing poise, exuding an aura of calm. Unfortunately very few of these goalies exist, and virtually none will be available via trade or as a free agent on July first.

First I did a a bit of number crunching to explore the connection between a goaltender's save percentage one season and their save percentage the following year. Towards this goal, I collected the statistics, since the 2000-01 season, of every goalie aged 25 or older who played more than one NHL season of 15 or more games. I then plotted and determined the correlation between subsequent seasons as shown below: 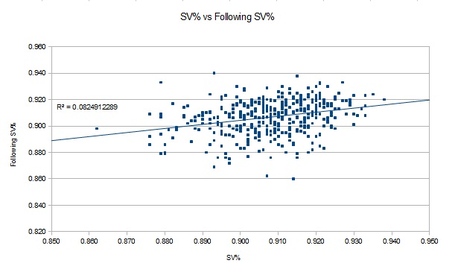 The R2 coefficient of determination works out to 0.0824912289, which for a sample size of 411 goaltender seasons means we can assert that slightly more than 8% of the variation in seasonal save percentage for any goalie starting 15 or more games is attributable to their work in previous seasons. In other words - just because a guy put up good numbers last year, we really shouldn't assume he'll do so the following year.

So adding a goalie on the basis of his numbers THIS past season doesn't make a lot of sense, as we're basically rolling the dice. In fact, career even strength save percentage is a much better predictor of future performance, particularly in netminders who have faced over 5000 shots on goal. The best route is thus probably to find a guy that isn't over the age of 38, who is coming off of a down year, but has had solid career numbers to this point, particularly at even strength.

To that end, let's take a look at goalies who are over the age of 25 that have played 40 or more games combined in the past 3 years and posted a decent career SV% while facing over 5000 shots on goal.

45 NHL goalkeepers over the age of 25, and under the age of 37, have played 40 or more games in the last 3 seasons, and of that group 35 of them have maintained a SV% of .905 or better - with one of those being JS Giguere, whom the Leafs cut loose to free agency prior to this past season. That leaves 34 goalies to explore as potential options. The following table ranks those 34 goaltenders by their ES SV% since the 2006-07 season, alongside Reimer and Gustavsson (whom you will all hopefully note sits dead last on the chart):

Amongst the 30, here is the list of goalies who may or may not intrigue the Leafs as veteran options:

UFA after his 1 season experiment in Washington. He is a reliable veteran, who would immediately stabilize the Leafs netminding situation. Unfortunately he would cost a large premium to bother signing in Toronto. Also - based on his contract with Washington, it seems fairly obvious he is in "win now" mode, and the Leafs don't necessarily meet that description.

Obviously a potential candidate with a huge amount of experience that would improve the team drastically. He has a lot of baggage, and playing in a major media market not work out well for him given his tribulations in Vancouver. Either way, this is going to keep being discussed until he gets moved.

Ageless wonder in Calgary, who unfortunately can't seem to get them to the playoffs. Not sure he'd have any more luck in Toronto, and he seems to alternate good and bad seasons. He's also getting close to that magical 38 year where Goalies seem to drop off a cliff statistically... not sure I'd be interested at his price tag either way.

Cheap backup option with numbers comparable to Biron and Theodore. He's backed up and played alongside Jonathan Quick and Mike Smith in his most recent stops in Los Angeles and Phoenix respectively, so he wouldn't be the worst signing in the world. He hasn't played a lot but his numbers are respectable. Definitely worth a look.

Similar to the aforementioned LaBarbera, though slightly better ES SV% numbers and play in New Jersey and Florida may make him a bit more expensive. He also has a history with the Leafs organization playing alongside Justin Pogge the last time the Marlies made a significant Calder Cup run. Not sure he'd be interested in playing in Toronto, but he's worth inquiring about.

Harding's numbers are eerily similar to those of James Reimer. Even the lower shot count implies he may be far from a sure thing. His SV% of .912 over the past 3 years, is very marginally better than Reimer's .911, and they have almost identical ES SV% numbers too. Not sure why we'd bother adding him if he's just going to be a carbon copy of the guy we've already got. Particularly when Scrivens is waiting in the wings.

Thomas is unlikely to be moved by Boston, and even if he is traded, he isn't likely going to Toronto. That being said, he'd immediately improve the situation in net for the Leafs, and would free the Boston net up for Tuuka Rask. I don't think Chiarelli plans on moving him, but never say never.

Nobody has asked for my personal opinion on this, but it's my article so I'm going to give it - I wouldn't sign or trade for any of these guys. I personally think Scrivens is more than viable as an NHL backup. I think the type of goaltending the Leafs need to seriously contend is far more expensive than they can afford to go out and "buy".

Even with the most significant names on this list, there's zero guarantees it improves the situation drastically. Unless they can add a big name I don't see how this whole situation improves a lot over Reimer - who I think is due for a bounce back year at any rate.

If the Leafs can ship out significant boat anchors from their perspective then I say go ahead - make that Komisarek for Luongo trade - but otherwise this doesn't make a lot of sense to me. I know this may find some disagreement in various corners, but hey, that's the point of the comments section right? Let me know what you think.