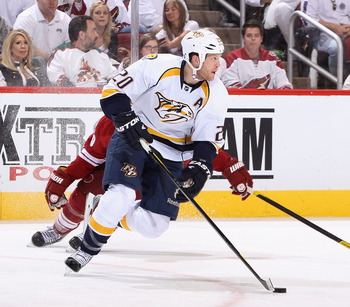 The NHL first introduced a salary cap in 2005-06. In that year the maximum amount a team could spend was a paltry $39 million, or roughly half of what Ryan Suter is going to make next season. For the 2012-13 NHL season the salary cap has been set at $70.2 million. Some people believe that the cap will be rolled back as a result of this summer's ongoing CBA negotiations (I don't), but GMs are currently operating with $70.2 million in mind as they head into Free Agent Frenzy this week.

While the salary cap has increased 80% since it was first introduced, most fans' expectations for what salary figures should look like have not. Many fans still seem to be operating under the premise that a $5 million contract today is the same as a $5 million contract signed a few years ago. For a player this is more or less true, since inflation of the dollar (Canadian or U.S.) is not anywhere near 80%. For a team on an internal budget it is also somewhat true since the amount that the owner will let them spend has not increased. But from the standpoint of how much a team can spend on players, it's not true at all. I decided to explore this in a bit more detail with the current Leafs' roster.

Because it's hard to mentally adjust expectations for the dollar values on a contract as the cap rises, I think it would be helpful to start thinking of player salaries in terms of the percent of the salary cap they took up the year their contract started. To that end, I calculated that statistic for every player currently on the Leafs roster according to Capgeek. For players who currently do not have contracts such as Nikolai Kulemin, I used the value of their previous contract. I also included Ben Scrivens since Capgeek listed only one goalie for the Leafs. And the roster includes Colby Armstrong because I put the spreadsheet together before his buyout was announced.

In addition to calculating each player's cap hit as a percentage of the cap I also inflated each player's salary to the value it would correspond to under a $70.2 million salary cap and deflated it to the value that it would correspond to under the original $39 million cap. The players at the extremes produced interesting results; Dion Phaneuf's contract is equivalent to an $8 million deal signed tomorrow, while Ben Scrivens' contract last year is equivalent to just $364,000 under the original 2005-06 salary cap. Here's how the whole team shakes out, sorted by cap % the year the deal started:

Since only one Leafs (Dion Phaneuf) has a deal that started more than three seasons ago, the results for most players going backwards are more interesting than the results going forwards. This highlights the fact that some recent contracts are not as bad as they might sound. James Van Riemsdyk's new contract would be less than $2.5 million under the original cap. Mikhail Grabovski's deal looks pretty good in this context. A $3 million centre would have been looked at as good value in 2005. Phaneuf's deal is the one that shows the most striking inflation - his contract is the equivalent of over $8 million 2012-13. That's worth keeping mind if Suter gets something like $8 million this week; Dion Phaneuf got that much money as an RFA 4 seasons ago.

Since most of these contracts are fairly recent, I thought it would be interesting to grab some contracts from earlier in the CBA to show just how much cap inflation has really taken place.

Here's where we can start to see just how much inflation has really occurred. Three players on this list have contracts roughly worth $12 million under next season's salary cap. Bryan McCabe's deal in 2006 is probably larger than the highest cap hit for any defender will be in 2012. And Zach Parise isn't going to have a cap hit anywhere near $12.125 million. So as you can see, talking in absolute dollar terms creates pretty big problems when comparing players who signed under different salary caps.