As per Winging it in Motown and Kukla's Korner, here's what looks like pricing info on the Winter Classic between Detroit and Toronto: 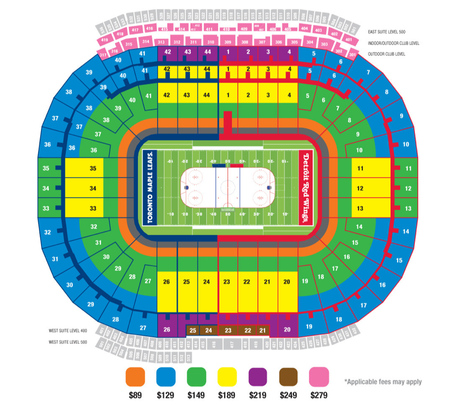 Depending on who’s received what initial information, at this point, it sounds like Red Wings, Maple Leafs, Grand Rapids Griffins and Toronto Marlies season ticket-holders will get first dibs to the events, with tickets to one of the Great Lakes Invitational games required to snag a Winter Classic ticket, and in terms of the general public’s access to said tickets?

Again, depending on who’s receiving what information from their ticket representatives, there may not be any public sale of tickets to the Winter Classic itself, though it’s more likely that an incredibly limited number of tickets will go on sale to the public later this summer—after the aforementioned STH groups and the Wings,’ Leafs’ and NHL’s sponsors have been appeased—probably at a slightly higher cost.

It looks like 2/3rds of the estimated 100,000 seats are already spoken for by both teams, and that doesn't include tickets for family, friends, or business partners of either team or the NHL itself. As suggested above, there may not be many tickets available to the general public after all, which likely means high demand and big prices in the secondary ticket market. Bummer, but not totally unexpected.

Links after the jump...

Did the Marlies lose on a missed call?

Good new stuff from Danny-boy over at Leafs Nation