TOR signs Jay McClement to to 2 year deal worth $3M.

Rob Vollman at Hockey Abstract had this to say about Jay McClement in his NHL Usage Charts (.pdf link):

Even when you get past those disappointments, top players like Milan Hejduk, Paul Stastny, Matt Duchene and even Peter Mueller simply have to play better on such a thin team - especially when others are handling the tough assignments - like Jay McClement who was absolutely dominated even by secondary lines thanks to his constant starts in the defensive zone.

Here's the usage chart for the Avalanche last year: 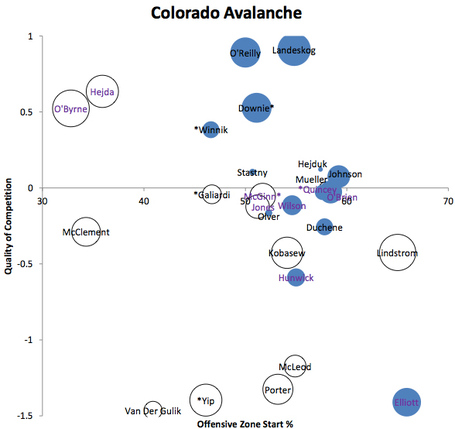 This is tough to analyze. McClement has a lot of DZone starts which will make his Corsi rel bad (the larger the white circle the worse), but his QComp was also low.

On one hand we should thank god the Leafs didn't sign George Parros or Brandon Prust, but there's nothing to get excited about. McClement is apparently a PKer, though as a centre I don't see where he slots in behind Tim Connolly, Mikhail Grabovski, Tyler Bozak and David Steckel.

At $1.5M a year this isn't a big risk, it's possible he can play wing or just be an extra forward. I'm confused: if the Leafs were standing by today to let the kids step up why sign anyone for the bottom six? Before this signing the Leafs had a bottom six that looked something like Nikolai Kulemin, Tyler Bozak, Mike Brown, David Steckel, Leo Komarov and Matt Frattin. With McClement in there suddenly it's not as clear how this shakes out.

Komarov is probably the first guy to lose a spot to McClement but what about Nazem Kadri? Going to be an interesting summer.

Edit: Don't forget Matthew Lombardi is still around. More moves have to be on the way.