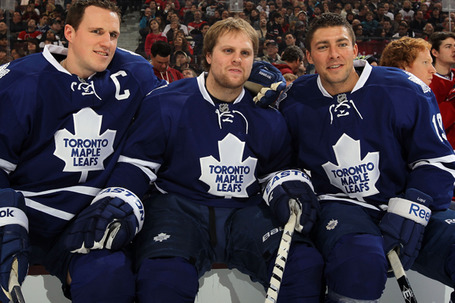 Back in November of 2011 I decided I was interested in doing some real time stat tracking for the Toronto Maple Leafs. At the time JP Nikota was (I believe) doing scoring chance tracking and no one was really talking about zone entries or exits yet, so I decided I'd track something that no one else was doing, which was to measure the amount of time teams spend in the attacking zone with the puck. I decided to track this partly to test the conventional wisdom that Corsi and Fenwick are good proxies for puck possession, but also just to see if anything interesting could be gleaned from the data. I was going to do this for 10 games, starting with the Leafs' game against the Phoenix Coyotes on November 15 and concluding with a game against the New York Rangers on December 5.

Unfortunately I missed a couple of games in the middle and I didn't have time to re-watch games while the season was ongoing, so I didn't have complete results to post until now. I did post individual game stats as I completed them, and if you're interested in reading those just search for "Measuring Puck Possession" on the site and you'll find them. After the jump I'll explain my process and post the results along with some discussion.

I'll quote myself from the opening post on the topic to explain what exactly I was looking for and how I measured it:

I decided that I would track how long each time had possession of the puck in the offensive zone. Because it would be virtually impossible to track each minor puck movement, I decided to use a bit of a simplified measure - I counted the beginning of an offensive zone possession as the time at which the attacking team first gained clear possession of the puck once it was in the offensive zone, and I counted the end of the possession as the time at which either the puck left the zone, or the defence was in clear control of the puck and not under significant pressure from a forechecker. Obviously there's some subjectivity involved in that, but given how quickly the game moves I think that was a good compromise between good data collection and mental sanity. As I discovered while recording time on attack, even that somewhat loose definition of a possession can be difficult to track in real-time, but I think the results I've gathered are on the whole pretty reliable.

It's important to note that this information was only gathered at even strength. I think I found a number of interesting bits of single game information from that tracking, which you can read in the appropriate posts. I'm going to focus on aggregate results here. I'm going to talk primarily in percentages here. In case you're not familiar with them, the number is just the percent of total events being tracked that the Leafs had. So, for example, a Time On Attack of 52% would mean that, of all the time spent in the attacking zone, the Leafs had 52% and their opponent(s) had 48%. The first set of numbers here is the total of all Time On Attack, Corsi, and Fenwick that the Leafs had over the course of these 10 games:

It looks like the puck possesion (TOA) numbers are underestimating the amount of shots, but the numbers are in reality very close. In order to get the TOA and Fenwick numbers to line up would require just an additional 12 shot attempts, roughly one per game. The difference is essentially non-existent. Getting the Corsi numbers to line up takes a few more additional attempts, 48, which amounts to nearly 5 per game. Keep in mind though, that the average game that I recorded data for here saw 94.6 shot attempts; the difference here is just barely over 5%. It's very close.

When measuring shot-rate stats like Corsi or Fenwick we often prefer to look at the stats from when the score was close (within 1 goal in the first two periods or tied thereafter) because teams change their strategies when the score is more widely spread or it's late in the game. If this is true then we would expect to see my TOA data move even closer to the Corsi and Fenwick data by looking at only Score Close numbers. Does that actually happen?

It looks like things have moved in the opposite direction, as Corsi and TOA are now virtually identical and Fenwick is a bit further apart. The Corsi and TOA numbers are in fact so close that it would require just three additional shot attempts to get them to line up. Three shots over the course of 10 games (of which 116 score tied minutes were spent with one team possessing the puck in the offensive zone). There is no perceptible difference. To get Fenwick to line up requires an additional 11 shots, still only one per game. The Score Close data does in fact make the shot rate statistics line up more closely with puck possession.

This does not conclusively prove that shot rate statistics are an accurate proxy for puck possession. I measured only 10 games out of the 1230 that are played every NHL season. However, the data I've collected here is one more piece of evidence that shot rates do come very close to puck possession. The fact that the numbers line up more closely as I add in more games supports this conclusion.

That's all I've got to say about shot rates, but I've got one more interesting piece of information to share from the data I've collected, and it's related to the importance of neutral zone play, something that Eric T. of NHL Numbers and Broad Street Hockey has recently discussed in relation to zone entries. I counted 13,060 seconds of attacking zone time in these 10 games. Two of these games went to shootouts, giving us 36,600 total seconds of hockey. Some of that time is played on the powerplay or with the goalie pulled, but most of it is even strength.

Just 35.6% of the time in these games was spent with one of the teams on the attack at even strength. That means nearly 2/3 of the game is spent in transition. That makes the ability to play in the neutral zone extremely important. A fair deal of the time here is spent in the defensive zone without the attacking team having possession, such as when a dump and chase is recovered by the defensive squad. But an awful lot of it is spent with one team trying to move the puck up the ice and gain/keep possession in the attacking zone. That makes the ability to make good plays in the neutral zone (as well as heading into it) extremely important. I think this backs up what Eric has found in regard to zone entries. It makes sense that what happens in the neutral zone is so important because most of the game is played either in or moving into it.

I'm not quite done with this data yet. For Part 2 of this post I'm going to be taking a look at the numbers for individual players on the Leafs. Are there specific players who are better at getting time in the attacking zone (and/or reducing time spent on defence)? Do individual players have puck possession numbers that line up well with shot rate statistics, or is that a phenomenon we can only see at the team level? I'll be examining those kinds of questions next.

If there's anything else you want me to look for in that data, just post them in the questions or hit me up on Twitter and I'll see if I can find an answer for you.