Editor's Note: Over the summer we're going to try to put together some primers on some of the statistical measures that fall under the "advanced statistics" umbrella in order to help lay the groundwork for a lot of the analytical discussion that takes places on the site and throughout a lot of the Bettmanosphere (trademark pending). This is a great chance to ask any questions, seek any clarifications, and share any links that can help increase everyone's undertanding (ie no "advanced stats are stupid" links).

What does the stat actually describe?

Where did the weird name come from?

What it means and why it's useful

Follow on after the jump for more detail, some examples, and discussion of why a player's Corsi is relevant.

What it can tell us

We use Corsi as a proxy for puck possession. Logically, the team that has the puck more is going to make more shot attempts. Generally this has been shown to be the case in studies of actual puck possession time, scoring chances, and general shot attempts. The correlation is very high amongst these variables.

So basically, what this means is - players with high corsi numbers are on the ice for a higher number of shot attempts for their team than the other team. That is to say, their team has the puck more when they're on the ice.

While a certain player may not see a positive corsi result in an individual game, their cumulative corsi over time should indicate their overall possession. This long term seasonal corsi value is shown in a couple of different ways.

Corsi REL is another statistic that is meaningful here, as it indicates how solid a player's possession statistics are relative to those of their team-mates. Similarly to how we tabulate Corsi ON, we can also tabulate Corsi OFF, which is the team's overall Corsi number while a player is OFF the ice. Corsi REL is just the difference between these two values.

Corsi REL = Corsi ON - Corsi OFF

Corsi ON, Corsi OFF, and Corsi REL are all tabulated using the same per 60 minute basis on behindthenet.ca and can be found under the Statistics pull down menu, on the "player breakdown" page. The lists can be sorted by team, position, minimum gp in a season, etc.

Here is the Corsi page for the Leafs from this past season. The players are ranked by Corsi REL - and this is a very solid indication of who on the team does the best job of maintaining possession of the puck (let this give you hope Nazem Kadri fans! in 21 gp last year he ranked 2nd on the team behind Mikhail Grabovski).

Corsi ON and Corsi REL are both used to help determine quality of competition also, by averaging out the puck possession skills of the players that a skater faced during the course of the season. I will explain this in more detail in a subsequent posting though. For now, just work on wrapping your head around the idea of shot differential equating to possession.

Another form in which shots are displayed on behindthenet.ca is via BW charts, which graphically display shot totals and goals from an individual game. This sort of image helps you get a feel for which team is driving play at what period of the game. Here is the BW chart for that same Leafs Habs game from the end of last year. 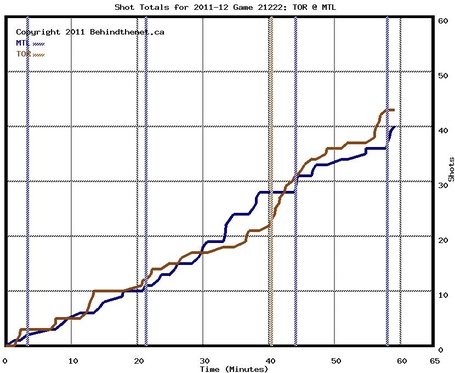 As you can see, whoever is pushing ahead in shot totals is getting more opportunity as time progresses. The Canadiens scored early just under 5 minutes in. The Leafs had a solid outburst of offense around the 12 minute mark, but the Habs rebounded, caught up in the shot totals, and scored again at the start of the 2nd. The Habs pressed offensively from the 30 minute mark but flat lined offensively around 38 minutes, and the Leafs started to dominate the shot count.
The Leafs scored at the 40 minute to make a game of it, but Montreal came right back and scored a 3rd marker despite allowing the Leafs to keep building the shot count. The final push was when the Leafs pulled their goalie to try to tie it up late, but Montreal scored an empty netter.

By looking at this shot chart, you can see that the Leafs were outworked for the first 2 periods of the game, and didn't really wake up until the start of the 3rd, by the time they were already down 2-0. The early possession didn't really favour either team, but Montreal got 2 goals despite that fact. They started to press their advantage heavily in
the 2nd, and by that point were fairly firmly in control. The Leafs pushed back, but it wasn't enough in the 3rd.

All of these impressions add up to a solid concept of the fact that SHOTS are an indication of WHICH TEAM IS DRIVING PLAY. Whoever is shooting more, has the puck more, and the team with the puck more tends to score more often. This is how hockey games are won. It might not overcome bad luck every night, but over the course of a full season, it's pretty important.