And Then... It Happened.

Share All sharing options for: And Then... It Happened. 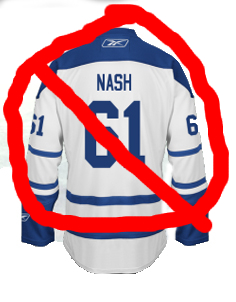 Rick Nash finally got traded and it wasn't to Toronto. He was traded to the New York Rangers along with a minor leaguer and a conditional 3rd round pick (if the Rangers make the finals) for Brandon Dubinsky, Artem Anisimov, Tim Erixon, and a 1st round pick. It's not a bad haul for a player that is so wildly overpaid for so long, but the Rangers do have a rather frightening potential first line right now, and did need to address scoring.

In the end, I'm not sure how much extra goal-scoring the Rangers added here, but they definitely lost cap flexibility (and about $1.7M in cap space). Scott "Fire Me Now" Howson didn't get totally ripped off, but he didn't fix his goaltending situation, didn't bring in any kind of star player, and has now given away about the only thing left on his roster that could conceivably have participated in the All-Star game.

A lot of people will likely look at the Rangers as the winners in this deal, but I would argue that we often judge teams a little more leniently on their deals if they're close to a Cup. It may justify the risk (trading for any player involves some risk), but it doesn't necessarily mean the poorer team made a worse deal. (Unless you are Brian Burke and have traded for Phil Kessel, right?)

The Jackets didn't get what they need, the Rangers lost a lot of flexibility. I hope everyone's happy.

Howson blinks, so Leaf fans don’t have Rick Nash's name to kick around anymore
Michael Langlois at Vintage Leaf Memories has a rather charitable view of hockey fans' capacity to reason.

On the Toronto Maple Leafs spending habits
Cam Charron is looking for ways the Leafs can out-spend other teams.

Minor-league shuffle: What Keith Aucoin brings the organization
Cam Charron has a few thoughts on the Leafs' most recent acquisition over at The Leafs Nation.

Rick Nash Trade: Scott Howson puts smiley face on Blue Jackets’ darkest day
"I'd have to check my notes," said Howson. Too right you are, lad. Story from Greg Wyshynski.

Ricky Olczyk Moonlights In Anaheim?
Tyler Dellow has his own thoughts on Lubomir Visnovsky.

Rick Nash traded to the Rangers, internet explodes.
Jake Goldsbie with his thoughts on yesterday's events.

Ľubomír Višňovský is just like the rest of us, he doesn’t want to play for the Islanders either.
Jake Goldsbie can understand not wanting to go to Long Island.

Alex Semin and the Politics of Performance
Ellen Etchingham's latest at BHS.

Impaired Boating Charges Against Dustin Byfuglien Have Been Dropped
But he still plead guilty to "careless boating", so he's still stupid. From truck at Arctic Ice Hockey.

Episode 31 – The Offer Sheet
Bobby Holik's blog is sometimes worth a visit. Today's link is a podcast with Holik.

Mike Gillis talks Weber, Doan and Luongo
Canucks GM says there isn't much to report on the Lu front. Says he's going to be patient. Story from David Ebner at the Globe and Mail.