In our From The Branches thread the other day an argument started after our beloved stat-man Steve Burtch suggested that Nikolai Kulemin should be playing higher up in the lineup than Joffrey Lupul. At first glance this sounds ludicrous; Joffrey Lupul was second on the team with 25 goals and 42 assists (behind Phil Kessel in both cases) in just 66 games. It seems likely that he would have lead the team in assists if he had played all 82 games. Nikolai Kulemin, on the other hand, was crashing back to Earth after a magical 2010-11 season; in 2011-12 Kulemin had just 7 goals and 21 assists, far below Lupul's totals. So it seems cut and dry that Lupul is better, right? 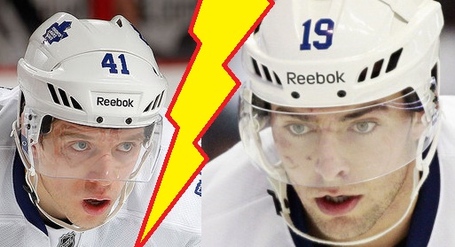 One element that Kulemin has in his favour is that he drives possession with strong defensive play, while Lupul is known (quite fairly) as being defensively poor. This question gave me the opportunity to look into a question I've wondered about for a while: does being really good at the offensive end of the rink (as Lupul is) create a buffer that compensates for poor defensive play? I decided to look into the Leafs overall play while these two players were on the ice to see if the Leafs as a whole had better results with Lupul on the ice or if Kulie contributed more to winning games.

Answering this question is not simple, so I'm going to provide a couple of different snapshots with different slices of data and then we'll see what we can learn from them. While I think there is a solid answer to be found here, different sides of the argument will find information to back up their position in this data. But first, some explanation as to exactly what I've done because there's some number crunching going on behind the scenes here that might not make much sense if I just throw up some tables. Apologies for how wordy this is, and you can just skip to the data if you want, but I think it'll be helpful to explain it first.

Using timeonice.com I collected the on-ice goal, shot, blocked shot, and missed shot data for both players. I grabbed full-season data for all situations as well as for just score close situations (both even strength only). I then used NHL.com to collect even strength time on ice numbers and HockeyAnalysis.com to gather time on ice for score close situations only. I then used those numbers to calculate rate statistics (shots for per 60 minutes, Corsi against per 60 minutes, etc.) as well as on-ice shooting percentages for those statistics.

I then multiplied the shot rate numbers by the shooting percentages to determine how many goals the Leafs could expect to score and allow with each player on the ice in all of the previously mentioned situations. The difference between goals scored and allowed is how well the team did with each player on the ice; a positive differential is good, a negative differential is bad.

Some of this data is available from behindthenet.ca and could be calculated quite easily, but I went a bit deeper than what they have online. I think it's important to correct for shooting luck, and here's why: Joffrey Lupul's career SH% is 11.09 and Nikolai Kulemin's is 12.27%. Kulemin shot well below his career SH% last year and Lupul shot a good deal above his, but unless you believe that Lupul suddenly became a better shooter at 28 years old and Kulemin suddenly forgot how to shoot at 25 it seems likely that these were both outlier years. Since both players are both relatively similar shooters I decided that in addition to running their numbers with their true on-ice SH% from last year I would re-run them using the team average which should give us a better idea how these two players would do playing with similar players.

Everyone is probably familiar with raw goals for and against stats, but I've calculated something a bit different here as well which is GF/GA stats that use Corsi instead of just shots that hit the net. This gives us a much larger sample to work with and gives the player credit for controlling puck possession. After all, a player is on the ice for all of the shots that occur not just the ones that hit the net.

The SV% figures used here are the Leafs full on-ice SV% and not the on-ice SV% for Kulemin or Lupul individually since I don't believe skaters (especially wingers) have much effect on SV%. For the record if I were to include them they would make Kulemin look much better.

So those are the raw numbers, what kind of differentials do those produce?

Using last year's real on-ice SH% for these two players makes Lupul look better by nearly 3/4 of a goal a game, a pretty big edge. Once I correct their on-ice SH% to the full team average the advantage that Lupul seems to have disappears. What this demonstrates is the degree to which shooting luck influences results. If Lupul and Kulemin both shoot closer to their career averages and the play with the same teammates their results look very similar.

Once we use Corsi to account for all shots taken while these players are on the ice, though, Kulemin actually comes out ahead. Unless you believe that either player has the ability to drive the rate at which all shots are missed or blocked while they're on the ice (which seems very unlikely to me but there's room for debate) then this is probably the best measure to use since it takes account of how well the team controlled play while each player was on the ice. And in this measure, Kulemin comes out ahead by roughly a third of a goal per game. Keep in mind though that these are per 60 minute rates and it's very rare for a forward to regularly get above 20 minutes of ice time a game.

One of the things that we often do with shot-rate stats is to only use score close situations. The reason for this is that coaches often change their strategies when they're up or down by more than a goal and this leads to different rates of shots as well as different shooting and save percentages. It may be important to correct for this when we're talking about how much these two players affected the Leafs' chances to win since they may have been deployed differently in different situations (for example, maybe Lupul played more when the team was behind, thus boosting his shot-for totals). To that end, I've compiled the same stats for score close situations only (which for both players amount to roughly half of their full time on ice).

And once again the score differentials:

Once we correct for shooting luck, though, the numbers look very similar to how they did earlier; both players are very close using just shots that hit the net at team average SH% and Kulemin has roughly a third of a goal per game edge once we use Corsi to include all shots taken.

I've tried to correct for factors like team-mate SH% here as much as possible, but I couldn't correct for everything. These two players had pretty similar zone starts so I don't think that's a major factor. Kulemin played most of the year with Mikhail Grabovski while Lupul played most of it with Tyler Bozak, and since I've used shot-rate statistics here that may play a factor since Grabovski is a very strong possession player and Bozak is a very weak possession player. I don't know of a way to compensate for that though since such a huge chunk of each player's ice time was spent with their respective centre.

So what conclusions can we draw from this? Based on what we have here I think it's pretty hard to argue that Lupul was actually the better player in 2011-12. Shooting luck was a huge driver of his results. At best he looks roughly even with Kulemin here, at worst Kulemin comes out ahead. My personal inclination is to say that Kulemin was the better player, but I think there's room to argue here because the various statistics give fairly different answers. Beyond that I've spent a lot of words here already so I'll leave the rest of the discussion to you guys.