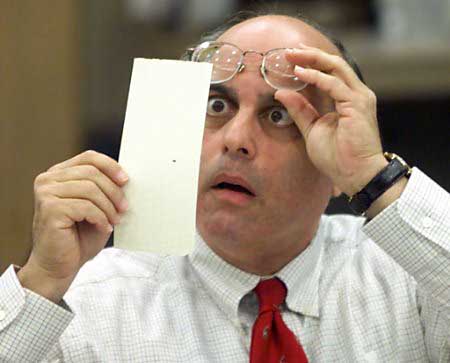 "You voted him WHERE?"

In yesterday's final look at the prospects that would miss the list, we had an incredibly close vote between Spencer Abbott, Sam Carrick and Kenny Ryan. Today, we begin counting down the top 25.

We begin this edition of the Top 25 Under 25 with a little bit of controversy.

The format we've chosen to tabulate the rankings places a premium on high votes; getting one vote high up in the rankings from one of the voters can offset a number of low votes from others. Down here in the bottom of the Top 25, where most votes are only worth a small amount of points, one big vote can make all the difference.

This year's race for the #25 spot was extremely close; one point separated our 26th place finisher Garret Sparks from Crescenzi, and the former Kitchener Ranger forward can thank Chemmy for earning the lead-off spot in our countdown this summer.

Crescenzi was definitely going to be moving up from his ranking of #31 no matter what; every member of the panel either kept their ranking consistent with the last time or bumped him up a few spots. But it was the massive shot up Chemmy's rankings, from 29th to 10th, that cemented the big centre's position in the Top 25. The only problem is, Chemmy didn't provide a ringing endorsement of his selection when asked:

Andrew Crescenzi is a hockey player who owns skates and skates around. He's never scored ppg in the OHL (even as an overager), but he got an assist in one of the two Marlies games he played in.

His name is difficult to spell.

Not exactly a ringing endorsement. Was it simple voter error, or was Chemmy making a bit of a point of the lack of quality in the majority of the Leafs prospects? If Chemmy adjusted his vote down towards the mid to late 20s in line with everyone else, Crescenzi accedes the 25th spot to goaltending prospect Sparks and would be fighting to hold on to 26th spot versus bruiser David Broll.

While Crescenzi never did score significantly at the junior level, going forward it's likely his strengths will lie in his physicality, his size, and his defensive game. Crescenzi is the prototypical checking centre to play for Brian Burke; big, good skater, willing to play with an edge, with a bit of skill. Not everyone sees it that way, though. birky was one of two people who held their ranking of Crescenzi consistent with the prior edition; for birky, this meant he was the only one leaving Crescenzi off the top 30.

If I had to describe Andrew Crescenzi to a Leafs fan, I'd probably say he is a poor man's Joel Champagne. A big guy who does okay in the OHL, but probably isn't talented enough to make the NHL in anything more than a 4th line role.

Keep in mind that Crescenzi was an undrafted free agent, signed after passing through the 2010 Entry Draft. So getting a 4th liner for free is still a victory for the development process.

In all, while it seems as if Crescenzi's position on the Top 25 this time around has just a twinge of falseness to it, ultimately I don't know if it makes a significant difference. Down in the fourth tier of the Leafs young players, the differences from one player to the next are remarkably small; everyone down here is fighting tooth and nail for their chance to prove they belong at the next level.

Crescenzi will be one of a number of young forwards who jump to the pros and fight for ice time on the Marlies. With his mix of size, sklll and smarts, Crescenzi might have a good shot at sticking in the AHL this season. In the eyes of the panel and of the Maple Leafs brass, he's continued to develop over the past season, and that's about all you can really ask.