An undrafted free agent, Greg Scott has worked his way into the top 25 prospects in the Leafs' organization. 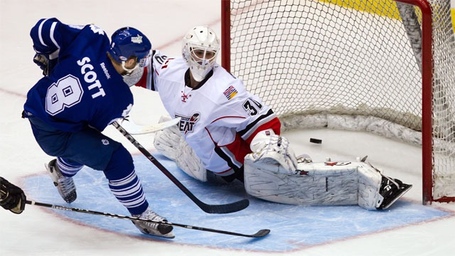 In our quest to accurately predict whether certain players can become contributors at the NHL level, I think the AHL occasionally gets disparaged. People sometimes dismiss the chances of a players' future prospects by claiming "he's just an AHLer", which I think mitigates the achievement that is simply making it to the AHL. The AHL represents the second best league in the world, and as the middle rung on the North American pro ladder, there is a constant choatic element associated with playing in the league; new faces are always being shuttled up, down, in and out, and twice a year existing players must face a deluge of new faces competing for their jobs, when CHL grads and NCAA grads make their way into the league to challenge their place.

Carving out a place in the AHL, especially as an undrafted free agent, means that you need to make it impossible for the coaches and management team to replace you. You need to become invaluable to the current success of the club, and you need to keep improving and earning more responsibilities.

In 3 seasons with the Toronto Marlies, Greg Scott has accomplished this. And so, the 24-year old jumps into the Top 25.

Since signing with the Leafs as a free agent in 2009, Scott has shown improvement each season, going from 0.45 ppg in his rookie season to 0.55 ppg in 2010-11 (limited to 55 games by injury), to 0.58 ppg last season (scoring 20 goals as a pro for the first time). However, Scott's value comes from his ability to be an extremely effective two-way player, and the BC native has earned head coach Dallas Eakins' trust to be used in all situations. Scott is routinely used against other teams' top scoring lines in a defensive role, and is one of the key forwards on one of the AHL's best penalty kills

The next step for Scott is whether he is capable of transitioning to the NHL. The Maple Leafs have a desperate need for fourth line players that could provide effective play, and their penalty skill is starved for capable players that can help the team stop bleeding goals. Scott probably won't contribute a ton offensively if he were to make it to the NHL, but he could carve out a place on the fourth line.

Scott moved up on most lists into a solid position in the Top 25. Interestingly, birky (ever the contrarian) actually moved Scott out of his Top 25 and dropped him entirely from his rankings. PPP has Scott ranked the highest at #17, bumping him seven places from #24 in the previous edition. What could possibly haev possessed him to make that jump?

I approached the ranking as a list for the order in which I thought the players would/could make a contribution to the Leafs'. So, for example, a consistent 30 goal scorer would theoretically top my list while a 24 year old utility guy that could improve the 4th line this year would rank ahead of a teenager with a higher ceiling. The big jump was precisely because of what Clark outlined. Scott has been a big part of the Marlies' success and looks set to be a new Lonny Bohonos: won't start in the show but could hold his own if the need arises.

At this stage in the rankings, we are dealing with a number of players who are seeking to establish themselves this season as pros first, and pros with NHL upside second. Scott is an exception in that he has proven he can succeed at the AHL level. At the current stage, Scott's current ability definitely exceeds that of his peers in this range of the rankings.

So why does Scott only rise to #24? For one, his age is a negative effect. At 24, Scott's one of the elder players on the Top 25 Under 25, so he lacks the developmental time that many of these 19 and 20 year olds have to continue to improve. Second, and likely the reason for his fall on birky's ranking, is the fact that there is uncertainty about whether he can break through to the next level; if he does, it's likely that his role will be confined to the fourth line and PK duties.