Together... More Or Less Forever

Share All sharing options for: Together... More Or Less Forever 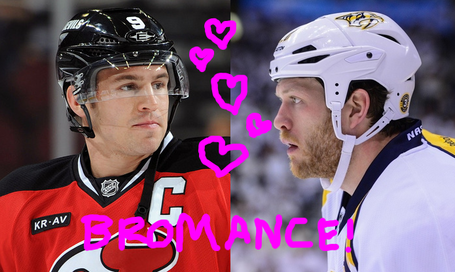 For that kind of money, you can KEEP THEM, MINNESOTA. I think paying any player that isn't Sidney Crosby this kind of money is little short of lunacy, but everyone over at Hockey Wilderness seems happy.

And they'll live happily ever after.

Bleeding Blue And White: 7 Thoughts on Free Agency Thus Far
Our very own BCapp has notes on several teams throughout the league.

We can’t seem to attract big-name UFA’s, but how often have we lost star players?
Michael Langlois is already starting to wonder about how much Phil Kessel is going to want to stay in Toronto.

Is Nazem Kadri ready for the NHL?
I think he might as well be given a shot, but I'm not thrilled with his development. Dallas Eakins was rather blunt when he said that he's been waiting for a long time for Kadri to take his game to the next level. Hrm.

Why Not Use IIHF-Sized Rinks?
Yours truly has an article about the possible effects of widening North American rinks to European standards.

2012 Leafs Development Camp Rosters
Kyle The Reporter has the list for you.

With Parise, Suter spoken for, the fight for scraps begins
David Shoalts denigrates the remaining free agents. (Half kidding.)