This week there was a lot of talk about where the Leafs might draft if there's a lockout and the season is cancelled. Many fans probably recall the lockout in 2004-05 that, conveniently, landed the struggling Pittsburgh franchise Sidney Crosby. Conspiracy theories aside, it all comes down to the numbers.

So, after spending a bit of time with Matlab, I decided to run a Monte Carlo simulation and see where the Leafs were likely to draft.

I simulated the data based on the way the 05 lottery was held. According to this CBC article:

Each team begins with three balls in the lottery barrel. For every playoff appearance in the last three years or No. 1 overall pick over the last four years, a team loses one ball.

Follow me after the jump to see how it plays out:

nhlcheapshot looked into it, and figured this is how it would play (assuming the criteria stays the same):

The rest of the teams would have 1 ball, resulting in a total of 51 balls.

Assuming this scheme is correct, the Maple Leafs (as well as all the other teams) would have a 3/51 or 5.8% chance of drafting first overall. But in order to determine the other positions, we need to imagine all the possible scenarios. To test this, I ran a simulation of 1,000,000 possible drafts, then plotted the frequency that the Leafs ended up at a particular draft position. Note that this should be essentially identical for all the teams with 3 balls in the lottery: 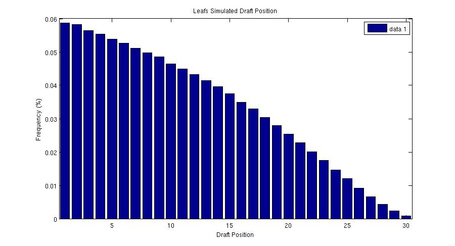 (sorry the size appears small. If you click it it should take you to a bigger version)

So, obviously, the Leafs have a much better chance of drafting first than they do at any other position, but the difference isn't great. How does this compare to other teams? Here's the same plot for teams with two balls in the lottery: 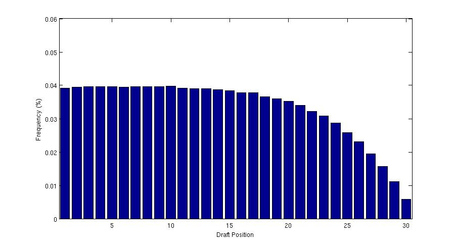 For those teams with two balls, their chances are much more equally distributed across the different positions. Finally, the teams with only one ball: 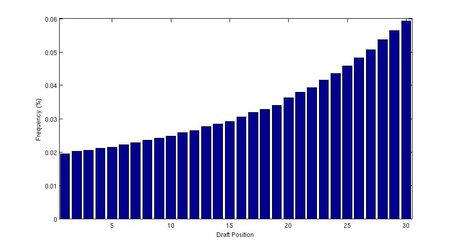 For the majority of teams, the chances of drafting first are much lower than at the later positions.

However, note that the difference is not that great. When it comes to any particular position (e.g., 1st overall) there's only a 3 - 4 % difference between teams with 3 balls and those with 1. But overall, the Leafs are much more likely to have a good pick than a bad one. The figure below plots the cumulative chances that the different teams (1, 2 or 3 balls) draft at or above some position. 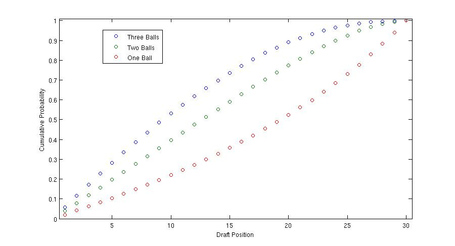 I apologize that the colors didn't render that well. This plot nicely shows that while the Leafs wouldn't stand a great chance of drafting 1st overall relative to the other teams, they do stand a much better chance of drafting in the top 5-15. The line of blue dots crosses the 50% mark right about at the 9th overall pick. In other words, in about 50% of the simulations the Leafs would pick 9th or better. For teams with 2 balls, they stand more likely than not to draft at about 13th overall. For the teams with only 1 ball, that falls all the way to 19th overall.

So, should you feel happy if the season is cancelled, knowing the Leafs have among the best chances to score the 1st overall pick? Probably not. In all likelihood, the pick will fall somewhere in the top 10, but I'd say there is a pretty good chance that will happen even if there is hockey this year. In fact, the lockout could actually hurt their chances of getting a pick in the top 10.

But really, whether by cosmic joke or the hand of Gary Bettman, the 1st overall will probably go to Columbus. Or Nashville. Canadian teams and teams in the North East division will round out the top 10. And the Leafs will defy the odds and draft 30th. You heard it here first.