Share All sharing options for: Nick Curley's Thank You Letter 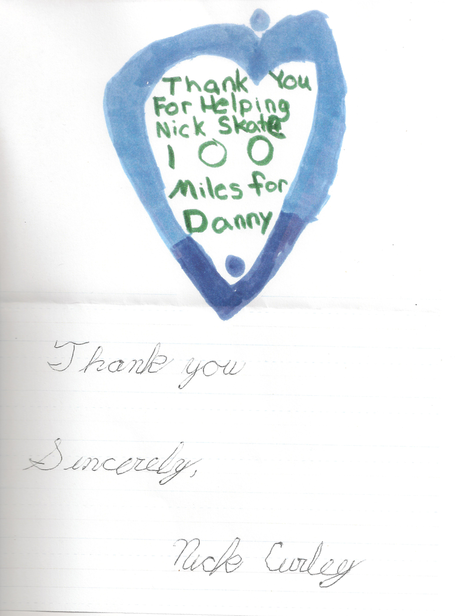 If you donate to Nick Curley's quest to skate 100 miles for The Danny Did Foundation, which raises funds for the awareness and research of Sudden Unexpected Death in Epilepsy (SUDEP) and general epilepsy, he'll mail you a personalized thank you card like the one I just received because he's pretty much the coolest 7 year-old kid on skates right now. So do the right thing and give a little bit to a great kid doing great things for a great cause.

Nearly three years ago, our son Nick learned about epilepsy. He knew his cousin Jenny had it, but distance kept that reality at bay. Then Danny Stanton came into our lives. Danny was a happy, athletic, silly, smart 4 year old...and so was Nick. A seizure killed Danny, snatching him while he slept in his bed. In the one place you think your child is safest, Sudden Unexpected Death in Epilepsy (SUDEP) took Danny, and our family like so many families was changed forever.

So this summer, Nick, a Mite Hockey player with the Glenview Stars NIHL organization, is ice skating 100 miles to benefit the foundation created in Danny’s name: the Danny Did Foundation. Five miles at a time, Nick will skate 100 miles in all. He’ll skate 50 miles forwards, and for the other 50 miles, he’ll skate backwards, like the good defenseman that he is.