Saying Goodbye to Gary again (no, not that Gary)

In trading away Luke Schenn this past summer (remember that?), the Leafs finally completed the whole Gary Nylund do-over. What was different and what did we learn?

Share All sharing options for: Saying Goodbye to Gary again (no, not that Gary) 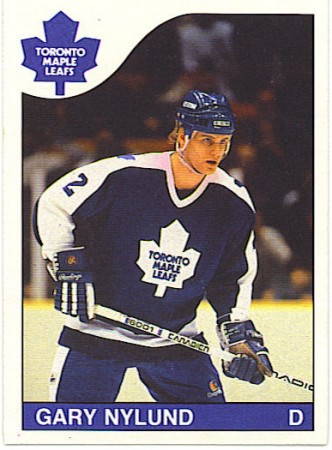 Almost from the moment he was drafted (there are archives, one could look), I have maintained that in drafting Luke Schenn, the Leafs were effectively taking a do-over for their 1982 pick of Gary Nylund. With Schenn, the Leafs could right the wrongs of all those years ago and get the player they should have had all along.
It helps, of course, that Schenn and Nylund were basically the same player. Gary was a little taller, Luke a little stockier. Both were highly-rated WHL defenders, strong defensive presences considered NHL-ready right out of the gate. Both were seen as being potential top-pairing shutdown guys, future captain material. Both were noted for the "good first pass." Both represented Canada at the World Juniors, Gary being part of the first-ever gold-medal squad in 1982. Luke was even assigned Gary's old #2 at his first camp.
Gary was actually rated a little higher than Luke. He was expected to go #2 overall in 1982. Playing on an awesome Portland team, he'd just been named the WHL top defenseman for the year, a First Team All-Star for both the regular-season as well as the Memorial Cup. He was the best prospect in the WHL and finished with 67 points in 66 games along with 267 penalty minutes. He was a beast.
Toronto was a little lucky to get him. Boston was drafting first overall and took a risk on Gordie Kluzak, a high-reward defenseman with a bad knee. Minnesota took #1-rated Brian Bellows second and this left Nylund for the Leafs.
Gary showed up to his first camp and impressed immediately. Promoted as NHL-ready, he certainly showed it. He was poised and unflustered by NHL-level competition.
Disaster struck on Sept. 27, 1982. During a pre-season tilt against Quebec, Gary was in the offensive zone when hit by ex-Leaf Wilf Paiement. He suffered a torn ACL in his left knee that needed surgery. He wouldn't see action again until February. Wanting him to have NHL coaching and experience, the Leafs brought him back to the big club instead of sending him to junior. Just 16 games later, a second hit tore the ACL again and he was finished until December. For his first two full seasons, he was only healthy enough to dress for 63 games.
He was healthy for his next two seasons, though, at least for the most part. His play, however, seemed to stagnate and he was often criticized both in the press and by management. While I think the injuries did slow him down, a lot more of it was probably circumstantial.
Nylund was a defense-first defenseman on a young team with no defensive conscience. He never brought a ton of offense to the table. I've become convinced that "good first pass" is really code for "has no offensive upside." What this ended up meaning was that you'd notice him getting burned out there, which was true of all the young Leaf blueliners, but there was never that great rush or pass that you'd get out of Benning or Iafrate to compensate. He was often paired with Salming and would play against the better opposition lines and it left him in a position to be burned fairly often because there was rarely any support. I don't think, ultimately, that he was getting burned because his play was all that bad - it was just as much that he was getting burned because he was 21 and left to fend for himself on a team with no system.
Further, it never seemed like his role was dead clear. He was to provide defense, clearly, but beyond that, was he to be the big hitter? The fighter? There were always players who had that role more than he did. (Does all this sound familiar? I think it should.)
What he did manage to pile up were a series of poor-looking stat lines. At the end of his fourth season, he had 218 games, 7 goals, 50 assists and a combined minus 96. Most Leaf defenders had pretty brutal plus/minus stats, but those were grim.
In late summer, 1986, we were all pretty shocked to see Gary jump ship. He signed the first RFA deal the NHL had seen in years and was suddenly a Chicago Black Hawk (two words back then). The Leafs were entitled to compensation and set their eyes on a prized young forward named Ed Olczyk. The Hawks countered with a package including small, speedy Ken Yaremchuk, journeyman defender Jerome Dupont and a fourth. An arbitrator had to make the call between the two options. Ultimately, he laughed off the Leafs demands and sided with Chicago. The papers all mulled over just how the Leafs could suddenly see Nylund as so valuable after dumping on him all the time.

(Note: Later, this same arbitration mechanism would cost the Leafs Peter Zezel and Grant Marshall in the Mike Craig signing.)

Nylund would play well in Chicago. He never had to carry the load and he settled down and became fairly reliable. Further knee injuries in the early 1990s eventually did him in and he went on to become a decorated firefighter out in BC.

Having seen all of this with Nylund, it was kind of instructive to see a lot of it unfold again with Schenn. The key difference, in my eyes, is that while both Nylund and Schenn were seen as still having value, it was the modern Leafs that actually managed to capitalize on it. This time, the Leafs actually got the young forward they wanted and made the deal of their choosing instead of the deal they were stuck with. I had hoped that the career arc would be better this time, but what wound up happening was that it wasn't the player who was handled so much better, but rather his exit.

Like Nylund, Schenn will probably be better out of Toronto than in it, primarily because of the change in expectations. In Philly, he's not the high pick and he won't be expected to carry everything on his back at 22. He'll be part of a team that hopefully supports him better and he'll be more able to hide.

I think the biggest problem for both Schenn and Nylund was the expectations that come out of their draft position compared to the impact of the actual skill set they possessed. I think that one of the biggest lessons to be learned is that a high pick almost has to be spent on acquiring top-end offensive talent. A top-five pick has to be an impact player and a defense-only presence doesn't really offer that in a truly measurable way. Whether one considers Schenn to be good at defense or bad at defense, he certainly wasn't good at offense and that's a killer problem for a high pick, particularly when you can get defense further down in the draft. If Schenn had been drafted where a Matt Finn was, he'd have been granted a lot more patience and his failings would have been more readily anticipated and accepted. You might not get Luke Schenn himself that far down in the draft, but you can get someone to do his job.

So while neither the Schenn nor Nylund experiments can really be called a success as both were out after just four seasons, the Leafs did manage to turn this situation into something they actually wanted, and in that sense, they finally got the Nylund pick right.

(Burke commentary because I pretty much have to: I can't really defend his performance and if the team stumbled at all he was gone anyway. I hate the timing because there was enough uncertainty already and this doesn't help. I hope it works out for the best because what other option do I have? I don't want another lost season.) 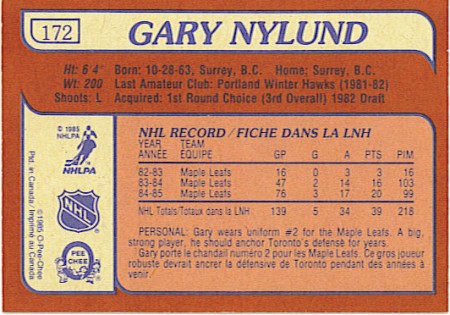