A Portrait Of Forechecking Excellence

James van Riemsdyk's second goal was a perfect illustration of how a strong forecheck can force the opposition into making the bad decisions that lead to goals.

Share All sharing options for: A Portrait Of Forechecking Excellence

It's hard to pin down what was the most fun about the Maple Leafs 5-2 win over the Penguins last night: was it James Reimer looking strong after a shaky start? Was it the Leafs' penalty kill looking *stares at phonetics card* com-pe-tent(?), or was it James van Riemsdyk, Nikolai Kulemin and Clarke MacArthur getting off the schneid? That's a trick question because it's all of them but I can only highlight one of them: JVR's game winning goal. Normally we do these video breakdowns on a goal against the Leafs but there's not much to say about them other than pointing out Reimer came across his crease poorly and that Grabbo made a terrible decision at the blueline. Without further ado, let's see the goal at full speed first

And now, let's take it apart piece by piece 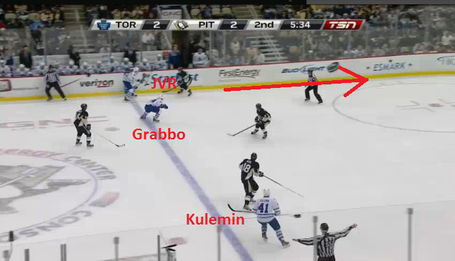 Here's how things started out: Grabbo, JVR, and Nikolai Kulemin are chasing a dump in and the Penguins look like they are in good shape. Of note is that Grabbo clearly has his tank full of gas and is flying in. 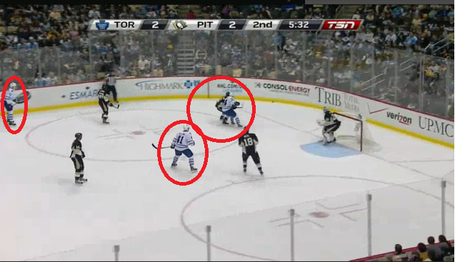 Grabbo is all over Matt Niskanen, Kulemin is in good position to react to the forecheck depending on what way the puck comes out and JVR is hanging out ready to cut off the Penguins' breakout. 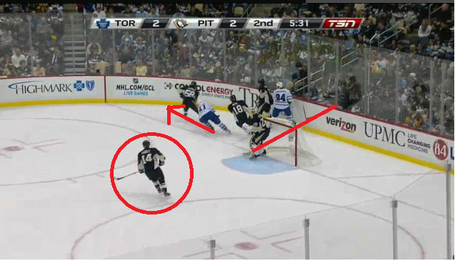 Grabovski did a good job of sealing off one avenue which, combined with Kulemin's strong reading of the play, forces the play up the boards towards a trap. Chris Kunitz is doing his job by circling down and preparing to offer the winger on the boards an option once they get the puck. 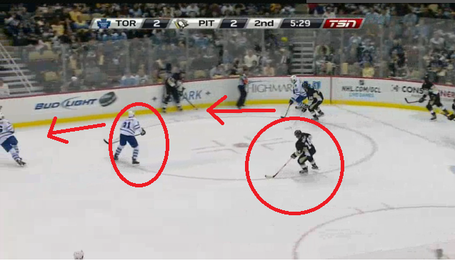 Kris Letang has moved the puck up towards Evgeni Malkin while his KHL teammate Kulemin continues to harrass the puck carrier with backside pressure. Malkin now has two options: he can try to hit Kunitz with a pass or chip it up the boards. Considering all of his team is in one quadrant of their defensive zone he should probably take the safe route. Meanwhile, JVR lies in wait. 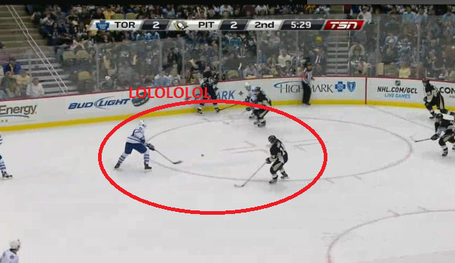 The problem with skilled players is that sometimes they choose the riskier play rather than the safer one. There is always a good time for that but it's not usually in your own zone. Right about now I bet JVR's eyes were as big as saucers. 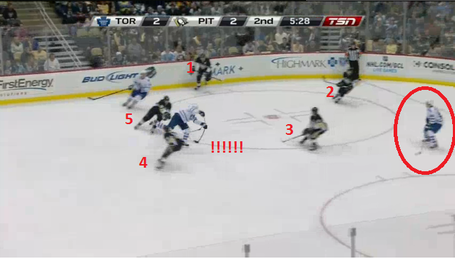 This is a great image. The two defencemen have slammed on the brakes and forgotten about Grabbo. Meanwhile, the three forwards are trying to converge on JVR whose stick is almost bent in half. 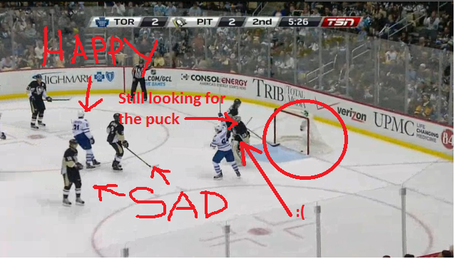 And just like that, it's 3-2 and the Leafs are rolling. Although the play happened at high speed I think that on video review Carlyle will feel a lot like Hannibal watching his wings envelop the Roman army at Cannae. The execution by Grabovski, Kulemin, and JVR was perfect but more importantly the reaction of the Penguins to the pressure unfolded in a manner that is usually only seen in practices when coaches are demonstrating a drill.