Sloth And Confusion In Toronto

There were plenty of bad goals in last night's loss to the Islanders but this one stood out because it highlighted how easily a penalty kill can be derailed by over enthusiasm, a lack of effort, and bad decision making.

Share All sharing options for: Sloth And Confusion In Toronto

The Toronto Maple Leafs of the past few years have been frequently able to point to one goal in losses where it felt, to fans at least, that the team had lost control of proceedings and were headed towards a loss. On Thursday night, that goal was the Islanders' second. The Leafs had completed a strong first period with a 3-1 lead and their penalty kill looked to be ticking along well again. Then, the Leafs broke on an odd man rush, lost their heads, and it ended up in the back of their net.

Ok! Now, let's get to breaking this thing down. Note: These are generally focused on how I would teach my players to play if I was in charge. Feel free to disagree but my team would be tight as a drum defensively so good luck improving on that. 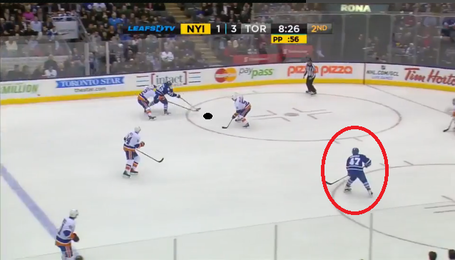 Much like the JVR goal, this one happens in part because an offensively minded player tries to make something happen rather than making the safe play. Inherently, it's required of them to think that way because if you always make the safe play then it can become difficult to break down the opposition. In this case, it's a 2-on-1 with backside pressure against a forward defending. Nielsen is actually playing this pretty poorly as he's far too tight to Tyler Bozak and Leo Komarov is tantalizingly alone in front of the net. So the urge to make the pass is more than understandable but you have to get that through. That's where Nielsen makes a great play and the Islanders are off to the races. 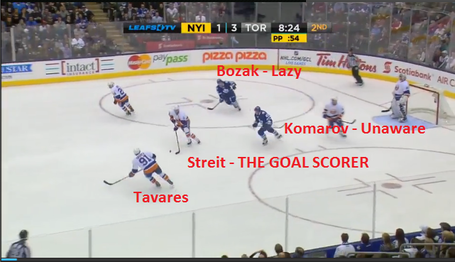 The saying in hockey is that no one skates harder than the guy that gave up the puck. On this play, Bozak is going to prove the exception to the rule while Komarov, despite having three Islanders ahead of him, will show why it's better to pick a man and stick with him than to cover space. 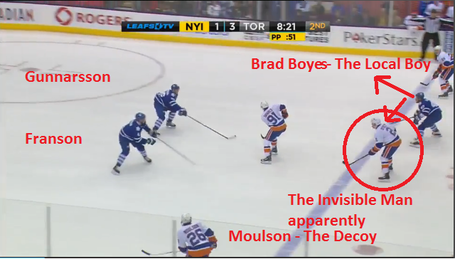 When I played in high school, we had a Russian coach that made us do a drill called the Minsk drill (he was really from Belarus but also in the KGB [allegedly] so at that point he's Russian) which was designed to help teach us to identify coverage on the back check. That might have helped here. When Komarov hits the blue line, he has a couple of options. He can pick up Streit since he's in the danger zone, he can run over and grab the local boy knowing he's actually the most dangerous player on the ice, or he can speed up and grab Tavares. He should have picked up Streit. The defence are also where I like to see them on an odd man rush: in the middle and leaving the opposition to the safe areas of the ice. 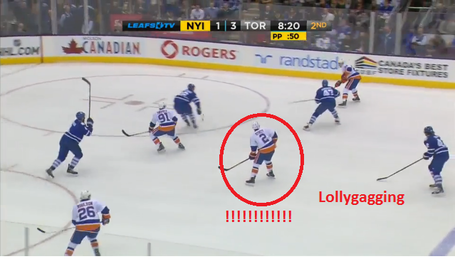 Now, Komarov obviously takes a lot of blame on this play but Carl Gunnarsson also shouldn't be rushing out to the wing on this rush. He's able to see Streit and the fact that Bozak is lollygagging back so he needs to stick in the middle. Ideally, he'd have taken John Tavares, left Streit to Cody Franson and prayed that the pass didn't make it all of the way across the ice to Matt Moulson. Obviously, there are a lot of moving parts on a rush like this and the knock on effect of Komarov messing up initially is that everything goes to shit. 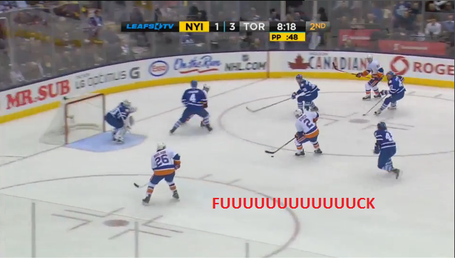 Now you can see some urgency in Bozak's skating which is surprising because the Leafs were on the penalty kill. Franson was put into a bad spot by his teammates. Gunnarsson left a comparatively safe area of the ice to defend a low-percentage area. Franson immediately chooses to do the same as he leaves the slot wide open to cover Tavares. Not that the alternative was much more palatable as he would have been left in the middle of a 3-on-1 with Tavares and Moulson on the sides. But it certainly increases the level of difficulty for the Islanders. 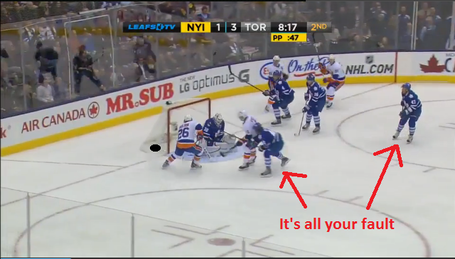 Overall, I think that this goal is a good example of why assigning blame on an individual play is dangerous. David Staples tries to do that for Oilers goals but I wonder where you would place it here? Where did the play become unrecoverable? Was it on Bozak's pass or his lazy skating back? Was it on Komarov misidentifying his man? Or on Gunnarsson leaving the middle of the ice to go after Boyes? Or was it Franson choosing to cover Tavares instead of sticking to the centre of the ice? You can make a case for all of them but ultimately it's really a product of all of those mistakes.