The Toronto Maple Leafs lost 5-2 to the New York Rangers for a variety of reasons that could best be summed as the reality that they were overmatched. The Rangers had more top end talent and it was better deployed.

The Toronto Maple Leafs spent 53 minutes hanging with one of the favourites in the Eastern Conference before falling 5-2 to the New York Rangers. That description, however, undersells just how overmatched the Leafs were in this game. The accumulation of high end talent on one line was just too much for the Leafs. Their ability to generate offence was essentially non-existent and certainly wasn't helped by having at least 3 dead roster spots on the bench in Mark Fraser, Colton Orr, and Mike Brown.

Early on, Ryan Callahan hit Mikhail Grabovski from behind. I'll let you guess what happened next?

The Leafs two tough guys soon made their presence felt in the most common way: fighting. First up, Mike Brown beat up Aaron Asham which gave the Leafs momentum before Colton Orr beat up Mike Rupp to give the Leafs double momentum! That momentum led to the Rangers forgetting to cover Grabbo in front of the net. He promptly scored.

James Reimer had a good night overall. He wasn't at fault for any of the goals and he made a number of great saves including a great glove save on a Rick Nash breakaway. One of the other storylines in this game was the number of stupid penalties from Grabbo's second delay of game penalty for a face off violation to Bozak's home run swing to multiple too many men on the ice penalties. It was on one of the latter that lifetime Rangers fan James van Riemsdyk put home a rebound after his initial deflection. John Tortorella's reaction can be seen here:

To say JVR was all alone with Lundqvist is a bit of an understatement: 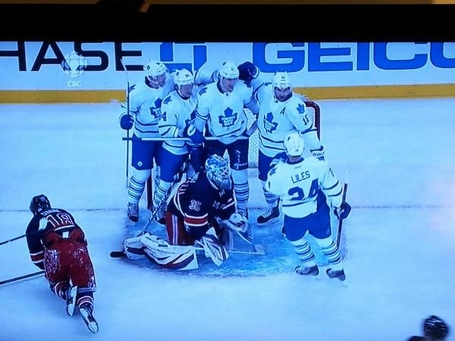 The second period had a lot more flow to it but the Leafs PK continued to look much improved. It certainly helps when the goalie actually stops the puck. There was a nice sequence of passing near the blueline that led to Clarke MacArthur having a one-timer go off the crossbar but that was almost the only Leafs threat of consequence.

Some bad backchecking left Brad Richards alone for a tap in. I'll break this one down later but it was similar to the Islanders' screw up. Reimer played another strong period holding back the tide. Mike Kostka and Dion Phaneuf played 21 minutes through two periods and ended up playing more than 30 minutes apiece. Meanwhile, our heroes from the first period, Orr and Brown, combined for just over three minutes. They'd end the game with six minutes total or less than the sum of time they spent in the penalty box.

Marian Gaborik, much like JVR, stepped out from behind the net and found himself all alone where he made a nice deflection to give the Rangers their first lead. The fourth goal came on a massive five player screen in which three Leafs were unable to move two Rangers from Reimer's field of vision. Matt Frattin actually stopped Michael Del Zotto's first shot but the second went in off of Brian Boyle. Those two goals highlighted the risk with defending so deep. You will give up a lot of point shots but if you neither block them nor clear the front of the net then you're prone to screened shots going in, deflections, or easy rebounds. Gaborik added an empty netter to cap things off.

I think that this is shaping up to be quite a confusing season. I don't think that the team needs to make the playoffs and some of their decisions indicate that there is some slack there. Randy Carlyle has been doing a lot of good things in terms of particular players such as Nazem Kadri but then he dresses Orr and Brown and Fraser and doesn't play them at all so the idea that this is an evaluation season doesn't make sense either. He also scratches Cody Franson and Mike Komisarek while playing Kostka huge minutes so the idea that they are trying to win doesn't quite ring true either.

Hopefully things clarify themselves soon but the biggest worry is that if the Leafs' don't decide on their future path they might lose out on Dion Phaneuf and Phil Kessel. And as the Rangers showed, the idea is to add top end talent not ship it out and replace it.