It's All In The Details

When the Rangers broke Reimer's shutout there was a lot of blame placed on a lot of different players. The most common targets were Kessel and Phaneuf and Bozak. But when you break it down I think it paints a different picture...

Share All sharing options for: It's All In The Details

Until Brad Richards found himself all alone with the puck and a gaping net there was some hope that perhaps the Leafs would be able to hold on to their fortuitous lead on the back of some good fortune and Reimer's stellar play. Unfortunately, once the Leafs' defences were pierced it was just a matter of time before the Leafs lost. Here's the video and then I'll break it down:

Ok, as always, let's get going with the high technology: screen caps and MS paint! 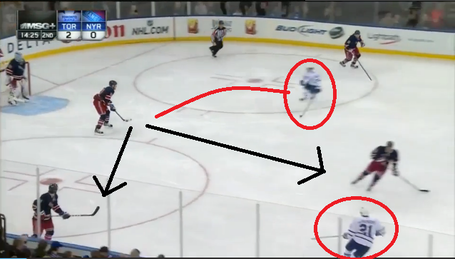 So that's Tyler Bozak pressuring the puck carrier. The idea, as shown by Bozak's approach, is to make him pass to either his right - where James van Riemsdyk can step up and take the puck carrier - or straight ahead where Phil Kessel is off screen waiting to pressure the middle. All of this is predicated by Bozak forcing a trade down the right side of the ice... 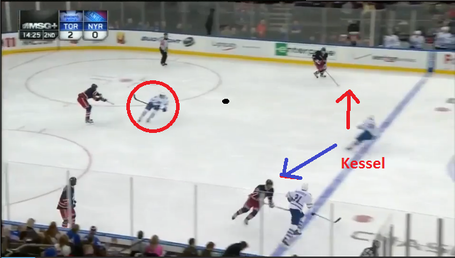 Well shit. As you can tell by Kessel's turn, he was ready to step up and cover Marian Gaborik. Instead, he has to rush out to the left side to chase Rick Nash who has taken the pass in stride and at pace. It's left to JVR to pick up Gaborik why Bozak heads on back making sure his defenceman doesn't jump into the play. 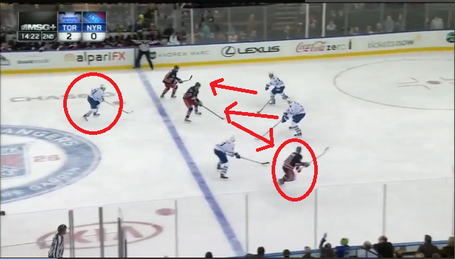 The Leafs' defence of Mike Kostka and Dion Phaneuf are not in terrible shape but JVR is losing Gaborik. They would be in a lot of trouble if Nash can thread that pass through to him... 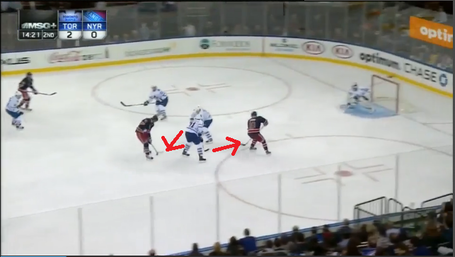 Great play Phaneuf! He stops the pass and it buys JVR the time to catch up to Gaborik while Phaneuf tries to step up and plant Nash on his posterior again. 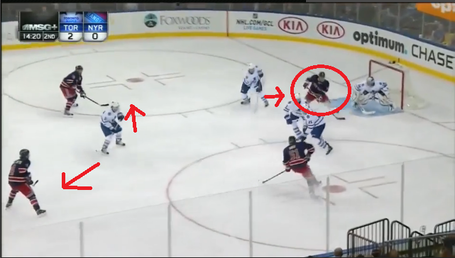 Damn, the puck went right back to Nash. As you can see, JVR has turned towards Nash which has left Gaborik alone in front of the net. Kessel is now in a bit of no man's land as Kostka's original man has slowed down leaving him free to take the now unmarked Gaborik. To top things off, the first defenceman has jumped into the play. It's a lot like watching an NBA defence try to rotate. Specifically, it's like trying to watch the Raptors rotate since they are so poor at it as well. 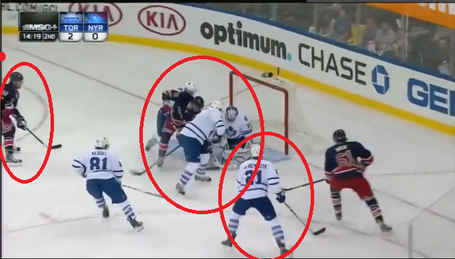 Now, JVR tried to block the shot and let Nash walk by him. Kostka has Gaborik but Kessel chose poorly and didn't cover Brad Richards. Phaneuf had a shot at clearing the puck and for some inexplicable reason he swats it on his backhand despite having the opportunity to chip it into the corner on his forehand. 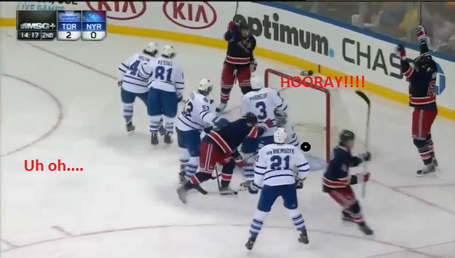 The major problem with chipping it on his backhand is that he put it directly into trouble and our one time flame Richards gets one of the easiest goals he's ever scored. There were a lot of problems with this goal, as is often the case, starting right from the beginning. Bozak didn't effectively force the Rangers' breakout to the side where he had support, JVR didn't effectively mark Gaborik and then he was left puck watching, and when Kostka peeled of to cover for him Kessel didn't read the play well. Plenty of blame to go around.