Let's get rid of an all-star. Great idea. - Bruce Bennett

But I'm getting ahead of myself. There are people out there who are complaining about Kessel's performance. Take this guy for example:

Expecting a scorer to score does not seem to be too outlandish, does it? #Leafs #Kessel

This started a long Twitter exchange with a few people from around here. McGran got a little defensive, but in reality, he had trolled Kessel earlier:

Interesting that Bozak took the shot on that 2-on-1. If Kessel were on a hot streak instead of a slump, would Bozak have passed?

Sure, Kessel talks about having to bury his chances, as all star hockey players do, but the important thing is that he is getting those chances. Sometimes those shots go in. Sometimes they don't. The typical approach to player analysis from those fond of narratives is a post ipso facto analysis. Someone who scores goals is playing well. Someone who doesn't is playing poorly.

The assumption that a player who doesn't score is playing poorly is based on faulty logic. In reality, it's not THAT surprising that Phil Kessel has yet to score any goals this season. Not because he's a lazy American without any talent but because that's just the way the cookie crumbles sometimes.

Just how does chance affect scoring streaks like this one? To find out I simulated one million 6-game stretches with an imaginary shooter - let's call him 'Phil' - who has 4 shots a game and scores an average of 10% of the time. Here's what the distribution looks like: 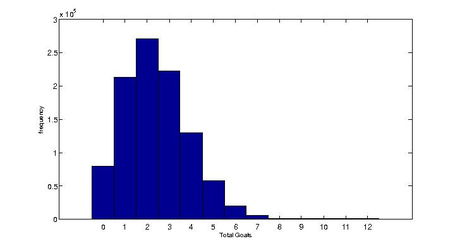 Over a million simulations, 'Phil' should most often score between 1 - 4 goals. And about 92% of the time he's potted at least one goal and we're not really talking about anything. Maybe he's only scored one or two and a few people chatter about his 'slow start' but there's no demand that Kessel score because 'that's what he's getting paid for' especially if he's putting up 4 shots a game.

About 8.5 % of the time, he scores 5 or more goals in the 6 game stretch. Now we're talking about his hot start, and how great he's been playing, and about how he's carrying the team and how we need to lock him up for $10M/year.

But the chances of him scoring 5 or more goals in 6 games is about the same as him scoring 0 goals (8%). ZERO GOALS! OH NO KESSEL'S A BUM! WHY ISN'T HE SCORING! etc. etc.

The thing is, the only difference between a 0-goal and 5+ goal streak over 6 games is chance. Luck. Bounces. The model assumes nothing about shot quality or who he's facing or who his line mates are or how much 'effort', 'heart', or 'grit' he's showing. It just assumes that on 10% of shots he'll score a goal - consistent with Kessel's career average.

This isn't really a debate about advanced statistics vs watching the game. In fact, this is a case where watching Kessel's play actually helps you contextualize 'advanced' statistics like number of goals scored. But more than that, it's about understanding that in sports, like in life, things happen by chance sometimes. Narratives might help you feel better about things, and may think it helps you understand how the world works, but more often than not they're leading you astray from the true causes of events. It's not some malevolent god that made your meeting run late and made you get that parking ticket. It was just unlucky. That's how the puck bounces. Sometimes you go on a goal-a-game streak. Sometimes you don't score any. But if you let the outcomes rather than the process affect your analysis, you're likely to come to the wrong conclusions.