The Maple Leafs, like many other NHL teams, sent their fans an 'aplogy' for the lockout. It continues a tradition of late of making apologies and it made us think about apology letters that were not sent out.

Share All sharing options for: Toronto Maple Leafs Apologise For The Lockout

NHL teams have been scrambling to send their ATMs fans apologies for the lockout but only the Leafs have been honest in their approach: 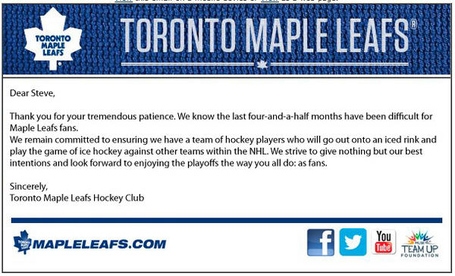 Wait, that was just the original draft. It can be hard to keep the Leafs' apologies straight but the real wording is here:

Thank you for your tremendous patience. We know the last four-and-a-half months have been difficult for Maple Leafs fans.

We are excited the NHL and NHLPA have reached a tentative agreement. Once the agreement is ratified, we will have more updates on the upcoming Maple Leafs season, including the team schedule.

We can't wait to get back to the game we all love. We remain committed to ensuring we ice a winning team that competes with the NHL's best. On behalf of the entire Maple Leafs organization, thank you again for your passion and loyalty.

As Godd Till said "four-and-a-half months? Try four and a half decades!". Frankly, it's not even really an apology so much as a thanks for sticking around. In fact, it's not even the Leafs first apology letter of 2012 this current off season! Old Man Forbes however noticed that he had an old program from the year I was born (yes, that is meant to make him feel older) that the issuing of apologies by the Leafs' front office isn't exactly a new move for them.

Obviously, the lockout isn't something that owners should apologize to fans for because that would be like the scorpion apologizing to the frog when being greedy bastards is just their nature. It did get Forbes and I me thinking about what are a few things that the Leafs should sent out large public apologies to their fans. Here are the top ten

Twenty-nine teams made the NHL playoffs in the seven seasons between the two lockouts. Astute readers will notice that there are thirty teams in the NHL and will remember that they last saw a Leafs playoff game in 2004. Putting two and two together, means that almost half of a generation of Leaf fans have yet to see a playoff game. But I'm sure they'll fix that soon-ish.

The sonic equivalent of Vesa Toskala mis-playing a rink long shot in Long Island. And it’s played before every home game. Seriously, besides sounding awful it also carried a terrible track record when it was played at Leafs games. Alan Frew was proud of the damage his song wrought.

The Maple Leafs make more money than God. They almost singlehandedly move the salary cap up every year because they are a money making juggernaut. So when they decided that Pat Quinn could no longer act as General Manager and coach they decided to skip conventional wisdom (SPEND MONEY TO HIRE A PROVEN WINNER) and try to unearth the next great prodigy General Manager as they did with Rob Babcock for the Raptors [Editor's note: check to see how Babcock did before publishing].

Their search gave us John Ferguson Jr. who was the then vice president and director of hockey operations of the St. Louis Blues. JFJ, who never met a plan he could execute, mis-read every trend in the NHL and transformed a perennial 100 point team into a .500 club who weren’t good enough to compete and not bad enough to stockpile talent. On the bright side, at least the Leafs learned their lesson and never hired anything but high-priced proven winners and we lived happily ever after.

Now, it is always easy for someone to look at a previous draft and say "boy, why didn't those idiots draft (insert future NHL star)!" In this case, "insert future NHL star" includes Nicklas Lidstrom, Pavel Bure, Sergei Fedorov, and eventual Leaf Olaf Kolzig. However, the real kicker with this draft (and stop me if this sounds familiar) isn't so much the outcome (which was still awful) but the process.

First, the good news: in 1989 the Toronto Maple Leafs smartly moved assets and acquired three first round draft picks. Now ,the bad news: for reasons known only to Gord Stellick and Harold Ballard, the Toronto Maple Leafs spent all three first round picks on players from the OHL Belleville Bulls proving that sometimes all you get for magic beans is a bit of gas. Scott Thornton, Rob Pearson, and Steve Bancroft will forever be joined in infamy. The fucking mindblowing part is that the Bulls were not some sort of OHL juggernaut: they were atrocious.

If you're ever in the mood to blame more than one person for the Leafs' post-1967 history then Steve Stavro is a good place to start. He began the effort of consolidating the ownership of the Leafs into what would later become Maple Leaf Sports & Entertainment and then he sold controlling interest to the Ontario Teachers' Pension Plan.

He also nixed a deal that Cliff Fletcher had in place to acquire Wayne Gretzky because of the financial difficulties that were destroying his Knob Hill Farms dynasty (I remember shopping there with my mom!). Imagine: the greatest player in the history of hockey wanted to end his career in Toronto and the Leafs' owner said no. Gretzky had 270 points in his last 252 games after being traded to St. Louis. The Leafs!

All of the money in the world and the Leafs never managed to get one of the greatest Leafs of all-time a decent winger in their prime. Imagine if the Kessel trade had happened in 2005. AND NOW WEEP. Sure, Roberts was good and Mogilny had skill to burn but those guys didn't get here until they were on the down slope of their careers.

The Leafs should have issued a public apology to Mats Sundin on the day of his HHOF ceremony for Jonus Hoglund.

Ever wonder why you can't get a decent beer at the ACC? And no, it's NOT just because it's in Canada and our beer stinks. It's because the Leafs have a single source contract for their beer and it's with Molson-Coors (a proud supporter of the lockout) and they sell shitty beer.

No microbrews, independents or anything locally made for you. Enjoy the game with a buck of corporate swill starting at $14 a pint.

When the Leafs moved to the Air Canada Centre there was obviously a lot of interest in what would happen to the historic Maple Leaf Gardens. At one point Eugene Melnyk wanted to have the St. Mike's Majors play there. Eventually, a deal was made to have Loblaw's and Ryerson transform the building; however a number of covenants were put in place by MLSE in an effort to keep hockey out of downtown Toronto./p>

While I enjoyed Melnyk getting blocked, I cannot countenance MLSE's efforts to control the Gardens and their injuction from 'competing' with the ACC/use of the name MLG. The Mattamy Athletic Centre, as it is now only known to people with no sense of history, is apparently a competitor to the ACC for events which is the worst that can happen to MLSE. When asked to elaborate on what events a 2,500 capacity building would steal from a building nine times its size an MLSE representative began to drool.

The only good thing you can say about Ballard is that he hasn't risen from the dead to feast on the souls of Leaf fans...yet.

While the first nine issues are mostly jokes, this one is a serious issue for which the Maple Leafs franchise never properly took responsibility after their negligent approach to managing their staff allowed for over SIXTY children to be sexually assaulted.

The mystique of the Maple Leafs and the desire to be close to their heroes (and in some cases meet them) were used to destroy the lives of dozens of children and the franchise not only allowed it to happen but they also allowed it to be hidden away for far too long.

It's probably not the light ending you're expecting but it had to go on the list.