The effects of the new CBA are little understood, but one of the most confusing new inclusions is the design of the penalties for long-term, "cap circumvention" contracts - i.e. the uberlong terms with trailing seasons of low cash value designed to lower the average cap hit of the deal.

According to most reports, the new penalty states that the accrued "sheltered salary" (my phrasing) of a player's tenure with a team will be averaged out as a penalty if that player retires early, where "sheltered salary" is the difference between the salary dollars paid and the cap hit incurred.

Aside -- why does this penalty make sense?

The reason is because salaries are supposed to be tied to revenue via the cap. If the total amount of salaries in a season is $1B and the total cap hit is $1B then everything is ok. But with variable amounts, the salary in year 1 might be $1.2B while the cap is $1B, and then in year 2 the salary corrects by being $0.8B with a cap of $1B.

If the players with front-loaded deals all retire after year 1, then there is nothing preventing new contracts from being signed in year 2 that will hit the $1B mark; the analogous correction would be a $0.2B cap penalty which would prevent this and re-establish $0.8B as the salary max in year 2.

This logic is also why it is only fair for any negative penalties to actually count as cap bonuses. Reversing the values for Y1 and Y2 (i.e. 0.8B and 1.2B) would mean that the players were underpaid in year 1, so if all those players retire then they should be allowed to exceed the 1B cap in year 2 by 0.2B to make up for this loss.
/Aside

But let's see what would happen if Luongo was traded to Toronto.

via pic.twitter.com/wTAEd9cA
[[All pictures are larger via link; they're getting shrunk for some reason]]

Suffice it to say that once Luongo plays into the 2015-16 season, the Canucks will have a major headache when he retires early.

If Luongo is traded to Toronto before this current season, the picture becomes as such:

What is most interesting to note here is the bolded column at right ("Original Van Penalty"); for all but the penultimate year, Vancouver's early-retirement penalty is MORE if they keep him. I repeat: keeping Luongo at this moment (pre-2012/13 season) will end up being WORSE for Vancouver than trading him away.

So we have the picture of what life would be like with Luongo and his Methuselah contract. It turns out that the damage from any retirement is not all that bad for Toronto, as the pain is mostly incurred by Vancouver since they had him during his $10m-salary season.

Of note is the drastic change in penalties if the player retires with 1 year left to go: the manageable amounts for Vancouver balloon into the full $6.05m cap penalty for the '21-'22 season, while Toronto enjoys a $1.7m cap "bonus" in that same season (as explained in the above aside).

So as long as we can get quality playtime out of Luongo, the downside really isn't there from a cap-damage perspective... for us at least. Vancouver is screwed regardless. And assuming league revenues resume growing and the cap goes up, the relative % of Luongo's salary to the team cap will shrink every year (i.e. inflationary yadda yadda).

I assumed that Luongo would be around for at least 3 years, so I only started looking at trade scenarios after the 2014-15 season

So there is a lot of data just sitting there, showing a lot of things changing, but let's organize it a bit.
First in a table, then in a chart:

The above table shows the various average annual cap penalties that would be incurred by Toronto if they trade Luongo away at any of the prescribed years.

The VANCOUVER row is to reference what their impact is upon Luongo's retirement (regardless of what other city he's in).

The TORONTO row is to reference what the impact of Luongo's retirement is to Toronto should they keep him and not trade him. 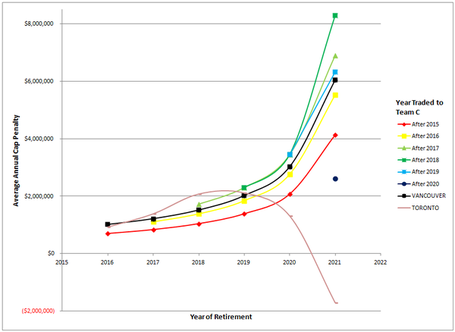 So this chart shows the above tables data in comparative terms. The lines gradient from 2015 trade scenario (Red) to the 2020 trade scenario (Navy Blue). Vancouver's impact is in Black, and Toronto keeping Luongo is in Pink.

What we see here finally is that it makes almost zero sense to ever trade Luongo once we have him, because the cap penalty continues to increase the longer he keeps playing. Unless they somehow knew with 100% crystal ball certainty that he would retire in 2018 particularly, there is no other reason to trade him and expose yourself to ever-increasing penalties. In fact, if Toronto trades Luongo at any point after the 2017-18 season, our cap penalties would be greater than those of Vancouver!

The only place where it makes sense, and is a benefit, is if they trade him after the 2020 season.

If he plays 1 more season then retires, his new team would enjoy a cap bonus of $4.3m, and Toronto's penalty would be a manageable $2.6m for a single season (Vancouver if you recall get's dinged for $6m if he retires with 1 year left).

If Luongo is still playing for Toronto at that point [and doesn't have any more room in his Stanley Cup case] then it would actually be a valuable asset to have. It would be in NBA-style territory, but at the cost of $2.6m to self, Toronto would have $4.3m in cap bonus space to trade away. I'm sure that would fetch something valuable from a contending team.

Of course, if he plays the final 2 seasons, no one gets any penalties/bonuses.

These contracts are a massive headache, and in every scenario Vancouver gets screwed if/when Luongo retires early - whether he's with them or with another club. Good job Gillis, Holland, Bowman, et al.

I AM OH-SO-VERY GLAD BURKE NEVER SIGNED ANYONE TO THIS RIDICULOUS CONTRACTS. 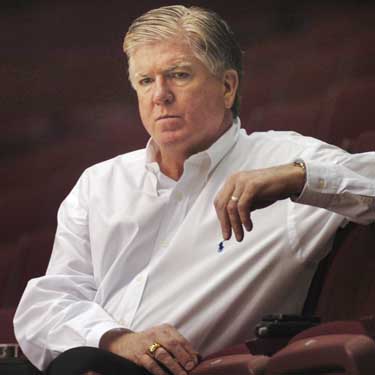