The Leafs won the battle of the pond.

Despite being out-shot through two periods, the Leafs walked into the third with a 3-3 tie. Obviously wanting to keep things interesting, the team allowed two goals while still being the better team. James van Riemsdyk scored his second of the game to tie it at 4, and Joffrey Lupul wired a wrister under the right pad of Devon Dubnyk with about 30 seconds to go to tie the game at 5.

To win it for Toronto, Cody Franson managed to create a 3-on-1 by shoving Ryan Nugent-Hopkins to the ice (causing Edmonton fans to require a waambulence) and springing Mason Raymond. It went from Raymond to Franson, back to Raymond, who shot, and Dave Bolland, going to the far post, slammed home a rebound. It was great work from the Leafs' blue-collar line, but also got Franson off the schneid, as he had a horrible 3rd period.

Using Brendan Shanahan's logic to assess Franson's potential misdeed, if Franson had made contact with RNH's head or neck, we would have seen RHN's head snap forward. Instead, we see RNH's whole body propelled in the direction of the contact, suggesting that it was indeed a blow to the back. Close to the boards, that's a no-no. In open ice? That's hockey. Sometimes called a snot-check, because of the way your boogers get blasted out of the front of your face. 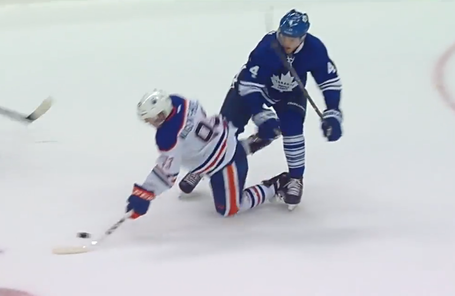 So the Leafs played some pond hockey and won. They probably didn't deserve to win, but it's not like the Oilers were great tonight, so screw them.

As I write this, the Extra Skater stats are not quite all up, but the link should be updated very shortly with all the fun fancystats.

Here's a link to the Box Score at the NHL's site.