I wrote a bit this Summer about how the high Leaf team shooting % (1st overall again this year) might well be linked to the very low absolute number of shots the team takes (26th this year.)

This is simply because the shooting percentage can be raised either by changing the number of goals scored, or the number of shots taken. [Woooo! Maths!]

People like Daoust have been looking at whether the high shooting % has to do with our Top 6 forwards having above-average shooting abilities. This could well be so.

But what if the another part of the equation was that the Leafs were using their Bottom 6 forwards for very specific roles & primary responsibilities -- to defend, to fight, to create face-offs, but with not much weight put on shooting the puck?

This would help solve both our statistical problems.

So, with absolutely no time to research, I did a quick perusal last tonight. Here’s what I found:

1. Of the 12 forwards, the Leaf have been using 7 more "offensively-minded" forwards so far this year, i.e. the top 2 lines plus Kadri. (This split could easily change into a 9/3 or 8/4 split as Clarkson and Kulie come back, or... maybe not.) These 7 shooters play the most minutes, almost all the PP minutes, all have 3 or more goals scored this year, and all have taken at least 12 shots. Together, they take 17.1 shots per game, combined, an average of 2.44 shots each per night, and have a combined shooting % of 17.0% this year, giving them 29 goals. Wowza.

2. But the players rolling through the Bottom 5 slots produced a very different story. Together, they have taken just 30 shots over 10 games. 30. That's just 3 shots per game, combined. An average of 0.6 shots each per night, and have a combined shooting % of 6.7%, giving them 2 goals. Egads, that's bad. 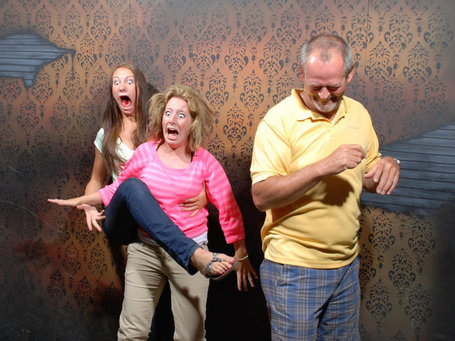 3. I then went to look at a few other, "better", teams and how their Bottom 5 guys do (calculated out as though they’d played 10 games.)

Compared to the Leafs Bottom 5 and their 30 shots in total and 3 shots per game so far this season, Montreal's Bottom 5 players, as a group, take 8.2 shots per game - that's 2.73 TIMES as many as ours take - and they have gotten 82 shots off during their first 10 games.

Looking around, we see:

Now, since we don't have any rivalries with any of the other teams, I didn't bother working out their numbers.

But in other words, team after team after team is getting off far more shots from their Bottom 5 players. Or perhaps another way to put it, ours are shooting far LESS than other teams.

4. The mathematical impact of this on total team shooting % is significant, simply because the Leafs Bottom 5 shoot just 6.7%, while the Top 7 get 17.0%. This heavy emphasis on shots form the Top end means that the team's forwards have an average shooting % of 15.4%.

Now let's at what would happen if we ran out a "normal" set of Bottom 5 forwards.

So, just by swapping the performances of our BOTTOM forwards with those of Montreal (Note to PPP readers: in real world, never EVER swap bottoms with filthy Habs), we would see:

Swapping out out Bottom 5's performance for a more mid-range team such as Edmonton would still see a decline in Leaf forward shooting from 15.4% to 14.5%, and an increase in shots/game from 20.1 to 22.1.

Either set of numbers (once combined with the shooting totals of our Dmen) would still see the Leafs move more toward the mainstream of League-wide shooting % and shot total statistics.

6. What’s interesting here is that this shift is not driven by the quality of the Top forwards (though I agree with Daoust that that is likely the case)… but by the very specific set of Bottom line players we have chosen to put on the roster, train and coach, dress for games and ice during games, and based almost certainly on Randy Carlyle's approach to the game. Which we have seen and analysed across many variables in recent months. For instance:

[Whether the low shot totals from this Bottom group are due more to them being players who can't shoot, or whether it stems from Carlyle's role-playing, is a secondary issue at this point.]

7. But, as a first, provisional conclusion, it looks as though Carlyle’s selection of and/or system of roles for his Bottom forwards:

At least to me, this looks like ONE of the possible reasons the Leafs team shooting % and shot totals are so far out of whack.

8. And no, this is NOT saying that Carlyle's approach is necessarily wrong. What it shows is how it may affect not just individual player statistics, but also... team-wide ones. A team which takes an unusual/minority/innovative approach may well produce a different set of results.

So the Leafs high shooting % may have little or even NOTHING to do with whether they directly or team-wide aim to "boost shot quality" or any emphasis on "scoring off the rush." It may simply be a consequence of icing poorer-shooting players less often during games, and/or directing them to play with other goals in mind than getting off shots.

9. Likewise, I am NOT saying that this is a BAD strategy. So do not try and MAKE me say that.

Rather, I would note that other teams are only getting, on average, an extra 2 goals per 10 games from their bottom 5 players. This could easily be being made up for by Toronto's approach, which sees its Top players get more ice-time, etc. (Also: see Edmonton. 50 shots and 11 goals from its bottom 5 players, but still, a terrible record.)

Your thoughts? (And yes, I suspect someone has already said or researched or thought about this, but if so, I don't know where it lives, and… I just wanted to see how it applied to the Leafs.)

From last night's comment section, where I dropped an earlier draft of this:

MaxPower417: As a whole it seems somewhat reasonable and intuitive. However, one obvious thing stands out and you said it yourself "Taken as a group, Carlyle gives his Bottom forwards lower-than-league-average minutes/game." yet you made your assumptions of shots per game, not shots per minute.

[Agreed. It'd be best if someone did a more systematic study, balancing out TOI/game of bottom line players across teams, maybe looking more at 5v5 alone, id'ing whether our high shooters then get more ice-time or take more shots, etc.]

NigelTufnelCadbury: Talking about bottom 6 roles for players, does anyone else remember when Dominic Moore came over and started producing more offensively than he had in the past? He was typically used in a bottom 6 role, and he was quoted once about his prior play and he said "Lemaire told me I wasn’t allowed to skate into the offensive zone any further than the top of the circles." His job was to get the puck in deep then get off the ice. Once he came to the Leafs, he was finally allowed to play the full 200 feet and as a result started putting up some offense.

[I think it's pretty clear McClement plays the same role. The fact that we often run out a full line solely to play defensively, plus another line for fighting means we've effectively doubled down on the "not many shots from the bottom-end" model.]

daoust: I don’t necessarily think the Leafs have above-average shooters across the board, but I think they have a combination of above-average shooters and guys who like to shoot from in close PLUS their top 6 guys, as you pointed out, take the lion’s share of their shots. I had a spreadsheet looking at this, looking at 3-yr averages and shots per game, but never finished it. If I had the time I’d love to see if that was the case with Quinn’s Leafs.

[Standard response to daoust below.]

And a few random notes:

** Obviously, another contributor to the team shooting % issue is the number of shots a team gets out of their Defence, a number which could rise for the Leafs this year as Gardiner and Ranger move more fully into the game and replace Holzer et al. This should serve to help increase overall shot numbers, but will also likely reduce team shooting % a bit.

*** David Clarkson on his own may shift those shooting % and shot totals somewhat, as he could well be firing 3 shots/game at the net on his own (while replacing a Leivo or Broll or Ashton, who shoot just 0.4-0.7 times/game.) Again though, since Clarkson's shooting % may be lower than our existing Top 7, we could see total Leaf shots/game rise, but team shooting % fall a bit further.

Why should I shoot more?