The Leafs are a transitional team that thrives on speed and skill off the rush to generate prime scoring opportunities in little zone time at 5 on 5, sometimes in odd man situations and often times before the opposing defence has been able to organize itself.

That's MLHS's Alec Brownscombe on the style of hockey your Toronto Maple Leafs play. I'm not going to disagree with this statement. The Leafs do have a lot of speed and skill on the wing and that's how they've scored a lot of their goals over the past 76 games under Randy Carlyle.

Please excuse the following graph. I stink at Excel. 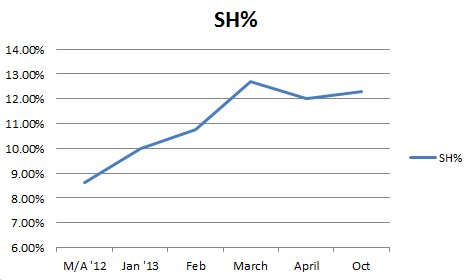 The issue I see with the "quality chances" argument that Alec discusses in his piece is that it seems to be in the wrong context (this is not a knock on Alec; I'm trying to have a discussion here, not an argument). The Leafs are scoring on a high percentage of shots because they play a certain way, and that's that. But the graph shows that not only are the Leafs shooting above what is expected at the team level, they're getting better at it. It has been a fairly linear progression since Carlyle took over. I think there are three logical questions that come from that realization: 1) Why are the Leafs actually getting better at scoring goals? 2) Will they continue to get better? 3) If so, how much better can they get?

There are two sides to the coin. One is that the Leafs are experiencing a run of good luck, for a lack of a more encompassing explanation, and that this is simply an outlier. That easily answers questions two and three (Probably not and incredibly unlikely). The other side of the coin is that the Leafs have found a style of play that allows them to capitalize off things like turnovers, using their speed and skill to create quality scoring chances. That explanation, however, does nothing to address questions two and three from above. Will they continue to get better? Well, how good are the Leafs at creating quality chances? Are they the best ever? Have they perfected this system? Who can we compare them to? No one else claims to play this kind of hockey. How much better can they get? 15% shooting percentage? 20%? 30%? Can anybody answer this?

This is one of the issues I have with the "quality chances" argument; all it does is attempt to address why the Leafs have scored at an otherwise unsustainable rate to this point. It does nothing to explain why their shooting percentage continues to go up and what happens going forward. At what rate of success do even "quality chance" proponents start to say this is silly and unsustainable? Is it possible that the Leafs really are a significantly better scoring team than the rest of the NHL and that they've found a secret formula to getting more quality scoring chances? Or is 40 or so games simply not a large enough sample to make that kind of definitive call? I'd wager the latter but I'd be happy to be wrong.