Sure, the old SH% may be a useful proxy for various old and tired stats-processing calculations (in the same way that his trusty mullet still works for Skinny), it may not, in fact, be as useful as the NNUSH.

For example, when looking at individual players in-year. Like, oh, for instance, LOOKING AT THIS YEAR'S LEAF FORWARDS, TO SEE WHO IS JUST LUCKY & IS GONNA REGRESS VS WHO IS TRULY SKILLED.

For that, you need a new, bigger, and better, tool.

I know, I know. When great innovations arrive, you need music to mark the moment. Great music. So. Wait 15 seconds and here you go. Creedence. AT THE ROYAL ALBERT FUCKING HALL.

Who gives a shit how many goals you score off the shots that reach the net? If a guy takes 100 shots, and 99 hit the defenceman in the nuts but never reach the net, but the last 1 trickles in, do we seriously want to say you're a brilliant 100% shooter for having scored 1 goal on 1 shot?

No. We fucking do not.

It is also unnecessary, since we now count, in excruciating detail, shot attempts of all types - on net, blocked and those that miss the net. In aggregate they're called Corsi For, and ExtraSkater even counts them up DURING games.

[And hey ExtraSkater guy, how about adding a column of Goals per Corsi For?

Anyway. After waiting weeks for one of you useless PPP troglodytes to do the work, I came to the conclusion that though you all live in your Mama's basements, when you get down to it, you're still just a useless bunch of inept little wankers, Epsilon-B's with wet-wicks to a one, and I'd need to do the work myself anyway.

And fuck you all very much.

Ok. To the calculations and what they showed. A couple of interesting things popped up, even from just my limited effort at looking at recent shooting by Leaf forwards.

What the chart below shows, across the columns, are first, the names, goals, shots and SH% of the Leafs forwards over the last 2 partial seasons.

The 5th column is that individual's SH% compared to the average SH% of the Leafs forwards that year.

The next 3 columns across are the Corsi For events by that individual, then the Goals per Corsi For %, aka the New NormUll SH% (TM.)

And then, a comparison of that individual's Goals per Corsi For % compared to the average of the Leafs forwards.

In yellow, I've highlighted some of the forwards who are shooting well above average. And in green, those shooting substantially worse.

What I'd suggest you compare, at a first glance, are the numbers in the two coloured columns. 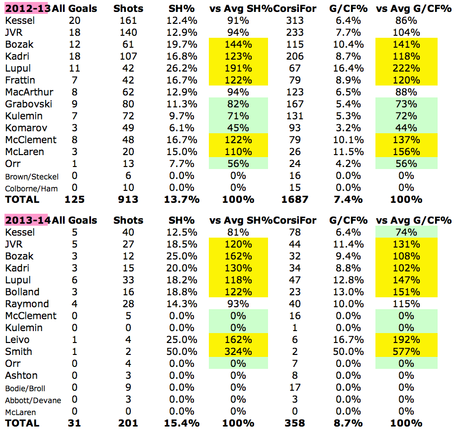 So.... his shooting looks unsustainable, right?

Welll, not quite. See, in both years, his NNUSH is actually much more reasonable, closer to the team's average. Just 18% above average last year, and just 2% above the average this year.

Why is that? Well... what it could be is that Kadri, in fact, generates a substantial number of Corsi chances for - but that a significant number of these shot attempts are either blocked, or miss the net and go wide, thus not being counted as "shots" by the traditional system.

Using this better measure, the NNUSH, we can see that, in fact, Kadri's goal-scoring rate may not be unsustainable at all.

2. BOZAK. Now, I know you don't want to hear this next bit, at all. But in the interests of science I feel I have to point out that exactly the same case holds for Bon Jozak. Errr, Tyler. Tyler Jozak.

Anyway. His 19.7% and 25% traditional SH%'s these past two years have been just plain scorching, right?

But. Once again adjusted and put on a Corsi For basis like NNUSH, they come down from being 44% and 62% above Leaf forward averages, to 41% and then just 8% above the average this year.

This may cause you to hate me, and no, it doesn't have to be caused by exactly the same reasons as Kadri, but it may well be the case that Bozak also is shooting wide a fair number of times, or into people's shins, etc.

If you truly wish to differentiate the cases, let's run a storyline that says "Kadri just missed picking the top corner, and man is that kid good," while "Bozak frigging blew a golden opportunity and shot into the corner, the ditz."

3. MCCLEMENT. Jay McClement's widely-discussed super-high SH% last year (22% above average) looks even more super-high when we glance at his NNUSH (37% above average.) So.... what was that all about?

Simple. Jay sank 3 Empty Net Goals last year. Without those 3 great putts, he shot well below average, on either measure.

Same thing for McLaren last year, except he had a couple of shot go in off his arse. Makes you look all high SH% and snipey. You're not, though.

4. LOOPS. Okay. Lupul. Dude shot 26.2% last year, and 18.2% this year. I mean, this man's great shooting luck is perhaps only matched by his terrible injury luck. Anyway, those SH%'s of his are a massive 91% and 18% up on even the Leaf forwards very high average rates.

So. Does our new NNUSH measure help dampen down this nonsense, rendering Lupul's pace more sustainable, a la Kadri?

Which leaves us with a conumdrum. Wrapped inside an enigma. Wrapped inside a small plastic enclosure with straps for which there is no equivalent term in English, but which we Nova Scotians call a "helmet" or "lid."

Anyway. Maybe we can interpret Lupul's numbers as saying, "Dude snipes the shit out of everything. Total predator. Rarely misses the net, never hits a shin-pad. Enjoys his goal-scoring dance way too much to ever give it up."

Because, hey, life has predators and maybe we got us one.

Then again, he could just be totally pulling those goals out of his ass, and we should trade this loon the day before his luck runs out.

5. GRABO, KULIE AND LEO. You know who didn't shoot all that well last year? Grabo and Kulie. And Leo. Explain that as you will (I won't) but what shows up when you look at their NNUSH is that they... didn't do well on that either. Maybe even a bit worse, in the case of Grabo.

So, you can either go with the "frustrated sniper a la Kadri" explanation for this one guys, or the "couldn't hit a barn a la Bon Jozak" storyline. Your call.

6. OTHERS. JVR, Bolland and Raymond may also be running a little hot on the NNUSH scale.... Kessel maybe an inch cold... but really, hard to tell. Got small sample sizes at work for Bolland and Raymond, Kessel passes up that tap-in, etc.

If I had to give bottom-line analysis, based on this new measure, about this year's Leafs and their shooting, I'd say:

--> You'd be well-advised to worry less about Kadri and Bozak shooting too high;

--> But maybe keep a slightly more jaundiced eye on Lupul, JVR or Bolland. Sure, they could sustain their high rates, or maybe start getting more tap-in rebounds off shots by Clarkson, or suddenly up their rate of Corsi generation... but they may also be riding a bit of luck. Hard to tell, on either measure.

The NNUSH. So. Fucking. Tasty.

What should this new shit be called?