Does Fighting Deter Other Nasty Business in Hockey?

Share All sharing options for: Does Fighting Deter Other Nasty Business in Hockey?

Since the hockey season has started back up and players are yet again being injured in fights, the debate about whether or not fighting should remain a part of hockey has reignited. Personally, I think fighting does have a place in hockey, just not the staged goon-on-goon violence that accounts for nearly half of all fights in the NHL. Two guys who have their emotions boil over in a tight game? Sure. Two ham-fisted meatheads fighting on their first shift together for no reason whatsoever? Pass.

In a poorly thought out and executed article over at the Predators blog On the Forecheck, the argument was attempted to be made that fighting has place because people still pay to watch the game with fighting in it, or something like that. Like I said, it's not very well thought out. Anyway, I ventured into the comments, as I'm prone to do, and my views on fighting were challenged with one of the most cliched responses regarding fighting's place in hockey:

Fighting diminishes the use of the stick (slash, spear, etc.) skate (slue foot, trip near the boards, etc.) and the really dangerous employment of knees and elbows to solve disagreements on the ice.

There are few things I hate more than unsubstantiated claims spoken as if they were true. In fact, I think it's for that reason that I got into blogging in the first place; I wanted to see for myself what the actual truth of the matter was with regards to hockey and the various claims made about the game. So presented for the umpteenth time with this cliched response on Dirk Hoag's blog, a lightbulb went off. Dirk, as you may know, compiles a list every year compiling the various penalty types called that season. This data I figured could be used to determine whether or not fighting deters any of that other rough stuff we're constantly told it does.

What I figured is that if fighting deterred naughty behavior, then teams who fought more would draw less naughty behavior penalties. The penalties which I classified as "non-obstruction penalties" were: boarding, charging, checking from behind, clipping, cross-checking, elbowing, illegal check to the head, kneeing, roughing, slashing, and spearing. Pretty much the type of behavior that could get you an invitation to eat fists from the Colton Orr's of the league if 'The Code' is to be followed. (Which it never is because there is no code.) 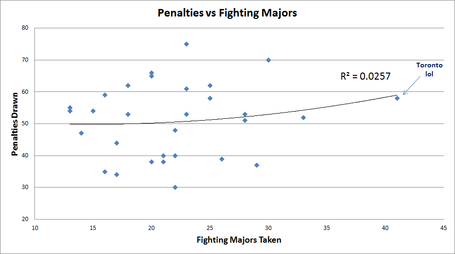 As Dirk puts the rest of his penalty data into spreadsheets, I'll update mine to see if there's any change at all; though I highly doubt it.

This should be the proverbial nail in the coffin for talk about fighting serving as a deterrent for naughty behavior in hockey.