Dave Bolland will likely miss the rest of the season with an unfortunate laceration of his ankle tendons. Are the Leafs negotiating an extension with him?

Share All sharing options for: Leafs Offering Extension to Bolland?

Today in an interview Claude Loiselle, an assistant general manager of the Toronto Maple Leafs, said the following (as transcribed off the radio by the excellent @Hope_Smoke, follow him if you want radio information without having to listen to them all day):

Loiselle said the Leafs believe Bolland will return with no problems. Said when he was in TB Boyle severed both wrists and he came back fine

This all points to the Leafs offering Dave Bolland a contract extension which seems like a risky proposition for a few reasons.

As we correctly pointed out before the ink was dry on John-Michael Liles deplorable contract: signing an injured player long term is a fool's gamble. Loiselle's insistence that Bolland will come back fine because Dan Boyle came back fine doesn't make sense. We can't predict injury recovery, especially not in terms of how an NHL player rebounds. What if Bolland can't regain his skating form and isn't effective? Look at a guy like Ryan Whitney whose career was torpedoed by a foot injury, or look at Erik Karlsson's return from an ankle laceration.

The Wheel of Morality

Fairness? While Loiselle is right that getting injured and losing a bunch of money doesn't seem fair he's also contradicted by two things his front office has done: signing Mason Raymond (available because his back injury derailed his career and led a team to dump him) on the cheap (why not pay him what was fair from the start?) and dumping Mikhail Grabovski after rumors of his health being in question.

To be clear despite my disagreement with moving Grabovski if the reason you let a player go is because their health will prevent them from being an effective NHLer that seems defensible. The job of a GM is to assemble the best hockey team available, which is why the Leafs signed Mason Raymond to a bargain contract hoping that he'd outperform it, and that's absolutely the right way to do things.

To then turn around and say "we began negotiations it would be unfair to stop" is complete insanity. If you begin negotiations to buy a house and find out the foundation is cracked you walk away. If a player gets hurt near the end of the contract it certainly stinks for them but walking away or adjusting the years and term is the only sensible option.

Pro sports in a hard cap league is a cutthroat operation. If you can't use all the leverage available to you to build a team you're probably not about to build a championship team.

Dave Bolland is currently at his peak age for production. What you see is what you get with him, in my estimation. Prior to his 15 game Maple Leafs stint he's a guy who put up 47pts as a 22 year old on a very good Blackhawks team and hasn't hit 40 ever since.

His time here, so far, was admittedly nice, though his 6G in 15GP came on 22% shooting (50% above his career average), and his assists are likely pumped up by his 1020 PDO. This isn't to say Bolland is a bad player, but it is to say that he's likely what he's always been: a second/third line tweener.

In fairness to Bolland, he has done well in his role compared to his teammates (remembering that the Leafs are such a bad possession team that Bolland's -9 Corsi while on the ice is a +12 relative to when he's off of it, woof): 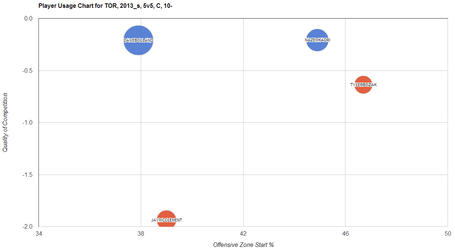 Bolland's salary is $3.375M right now because he inked a five year deal on the promise of his 22 year old 47pt performance and never found that offensive touch the Blackhawks thought they were locking up.

What Would I Offer?

To start the most important thing here is to not offer Dave Bolland term. He can have money, but you want to be rid of him if he can't play. Here's a Hockey-Reference search for guys who play C, aged 26-28, PPG between .6 and .45 with more than 60GP since the 2007 season: list of comparables.

Names that pop out would be similar players to Dave Bolland like Jarret Stoll (signed at age 31 for $3.25x3 years, which is probably too low) and Brooks Laich ($4.5Mx6 which is an horrendous contract and thus too high).

Bolland never showed the offensive flair that got him his current contract and while I understand that he's now a UFA I think getting a raise despite an injury offsets that. I'd offer Dave Bolland a modest raise over his current salary of $3.375M to something like $3.5M or $3.75M but I'd be very reluctant to offer him term. One year should be the goal on this contract.

All of that said, "it's risky" isn't the same thing as "Dave Bolland is doomed to be terrible". He could rebound nicely and make a long contract look smart in the end, that doesn't change the fact that negotiating with him seven months before he becomes a free agent is a despicable decision by Leafs management. Why not wait and see if he starts skating in May?