Leafs Check Out Early, Lose In SO

The Buds went shotless through the final 25 minutes of the game.

Share All sharing options for: Leafs Check Out Early, Lose In SO

Last night the Toronto Maple Leafs forgot that a hockey game lasts 60 minutes. Hockey writers often use this cliché to refer to collapses, but this was a special night.

First, the team began the hockey game by getting out-shot 8-0 in the first quarter of the first period. Jonathan Bernier allowed a goal just 1:57 into the contest, and it appeared that the Leafs had neglected to show up at all. To their credit, the team rallied and played the Pens about evenly up to the halfway mark of the game, at which point, the Leafs had built up a 4-1 lead over the Pens. It's not that the Leafs looked like the better team, but good enough that one could rationalize the score, especially with Marc-André Fleury having gifted at least one of those goals to the Leafs. Actually, some good forechecking by Tyler Bozak put the puck on a wide open Phil Kessel's stick for an easy goal on the Leafs' first shot against Jeff Zatkoff, who was brought in as relief for Fleury. "Opportunistic scoring," as they say.

Then, the tide began to turn. The Pens began pushing back, and the Leafs took a few dumb penalties. Yes, there were one or two soft calls, but the end of the second period saw the score sit at 5-3 Leafs, with Bozak pushing home a James van Riemsdyk rebound with just 4 seconds left to go. This was the last shot on net that the Leafs would get in this game. The Penguins out-shot the Leafs 17-0 in the third period and then 2-0 in overtime. It's not even like the Leafs were throwing a lot of missed shots at the net, either: 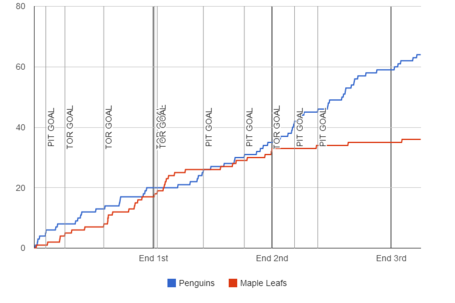 So that's it. The Leafs' Fenwick chart basically flatlines at the beginning of the third period, and that's about all that can be said for the overall effort in that time span as well. Here is the link to the Extra Skater page. Here is a link to the Box Score.

Evgeni Malkin played the role of Leaf-killer last night, scoring two goals, picking up an assist, having one goal waived off (he touched the puck with a high stick), and finally scoring the winner in a shootout. Significantly, he managed to blatantly push Bernier off the puck and into the net before scoring the tying goal, which wasn't called goalie interference because... Well, I have no idea why. I also don't know why certain things are "reviewable" plays while others are not, but there you have it. Of course Malkin scored the shootout winner.

- The Leafs' power play was able to connect 1/3 times, but allowed goals on 3/5 penalty kills. To be fair, one of the Pens' goals came on a 5-on-3, when Bozak had lost his stick.

- It might be tough to imagine that the Leafs got a point out of a game where they allowed 48 shots, but they actually won a game just last week where they allowed 50. Anyone who thinks the Leafs' goaltending isn't holding up a house of cards is kidding themselves.

- The line of Raymond-Kadri-Clarkson looked pretty good tonight, 3rd period aside. Same goes for the JvR-Bozak-Kessel line. Yes, one could go so far as to say that all of them played very well until the third.

- Paul Ranger and Dion Phaneuf looked like the best Leafs defencemen on the ice until the third period, in which everybody looked bad. Dion faced Crosby all night while Ranger faced Malkin.

- Mark Fraser has to go. #FreeGardiner

- Peter Holland finished with some of the better Corsi numbers on the team, but he still obviously needs to get stronger. He and Franson also shared a brain on the Pens' first goal when they both forgot about Chris Conner in front of the net.

- Speaking of Cody Franson, he hasn't looked great lately, and last night was no exception. Positional issues in his own end continue to be a problem, and while he's not horribly slow, he's not going to make up for many mistakes with foot speed, either.

- Poor Nikolai Kulemin. I'd be surprised if the Leafs offer him any kind of contract at all.

- The bright side here is that the Leafs play the Sabres tomorrow and can hopefully avoid making this a 3-game skid. The bad news is that their December schedule looks tough. Hold on to your hats, ladies and gentlemen.