The Leafs are known for defensive collapses and collapsing defensively. Both may be the result of coaching strategies. I promise that this post contains no advanced stats.

Share All sharing options for: Collapsing Defensively And Breakouts 101

If I had to guess, I'd say that Randy Carlyle knows darn well that his team's defence is terrible. He probably also knows that his centermen aren't the most defensively responsible group, either. The reason I say this is that he has, since the day he took over as the Leafs' head coach, instructed his wingers (and sometimes his centers) to collapse down far deeper than normal in the defensive zone. If he had more faith in his defenders and centermen to get the puck to his wingers, they would be instructed just to wait around the hashmarks for an outlet pass, right? Well, maybe not, but if he likes his D and C's, this is an odd strategy, and it affects his team's ability to break out of the zone with any kind of rush momentum.

The really odd thing is that the Leafs got rid of a good shut-down/two-way C in Mikhail Grabovski and their most developed prospect at that position in Joe Colborne before this season started. They also didn't acquire any proven defender to help the group, and don't tell me Paul Ranger counts. But let's set aside personnel changes to talk tactics for a bit.

So here is the most basic breakout in the history of ever: 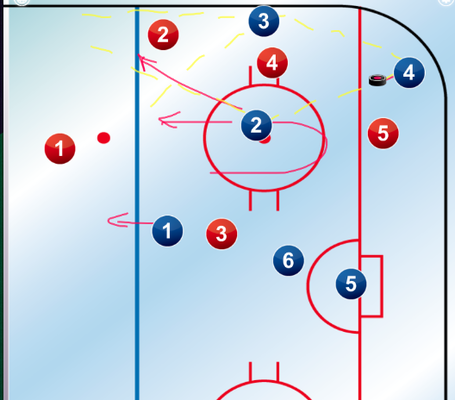 Most of you should be familiar with this already. Typically, it's the centerman who curls deep (or supports the defencemen down low) while the strong side winger makes himself available at roughly the hashmarks along the boards, and the weak side winger is breaking out, forcing at least one of the opponents' D to retreat in anticipation of a rush. It's really not rocket science; kids are taught this type of positional play from about the age of 6.

There are some potential variables, it's true. If the strong-side winger is covered, the curling C might take the outlet pass (at a better angle than I've drawn) and then send the puck on to one of his wingers as he skates out of the defensive zone. There are also instances in which it's a winger who winds up going deep to help the D and the C winds up as an outlet guy along the boards, but that's beside the point.

What if your D just can't come up with the puck on their own? What if your C is incapable of winning battles along the boards to support the D? In other words, what if you're the Leafs? The answer is: the wingers need to go deeper into the defensive zone in a panic to prevent good shots on goal. Maybe this is what Carlyle is referring to when he talks about mitigating shot quality, but I guess we don't know for sure.

What we DO know is that the Leafs' wingers are often found below the D-zone hashmarks helping out defenders and centremen alike. Yes, this may help prevent shots in a scrambly, short-term way, but once a teammate recovers the puck, where the heck is the outlet pass going to go? Probably just dumped out of the zone. Allow me to show a few examples.

Here is one from just a week after Carlyle took over. Kessel gets the puck with more or less the same breakout formation as I've described above, but his C and weak side winger are too deep to provide an outlet so he just chucks it down the ice, turning the puck over and getting a change of players. If Bozak were further up on the play (you can't tell from the photo, but he's not moving very fast, here), Kessel would have an outlet, but he isn't. Kessel also has his back to his teammates, which prevents him seeing his options, but he might be coached to shield the puck this way - we don't know. What I do know is that other Leafs sometimes do this as well. 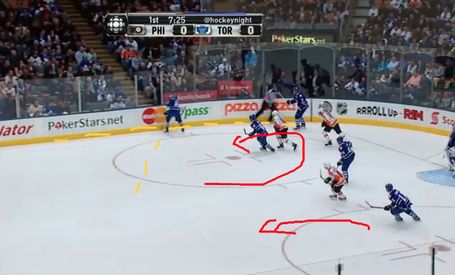 This actually isn't the worst breakout formation I've ever seen, but what the heck is that weak-side winger doing so deep? And what is the center (probably Bozak) doing so low while not skating super hard to make himself available for a pass? This isn't the best example of what I explained above, but it's getting there. Perhaps there was still some residual Ron Wilson left in this team?

This next one is from the last game of the 2011-12 season; Carlyle's first (albeit brief season) with the team. THIS is what makes me crazy. Just where on Earth are the defencemen supposed to put the puck? 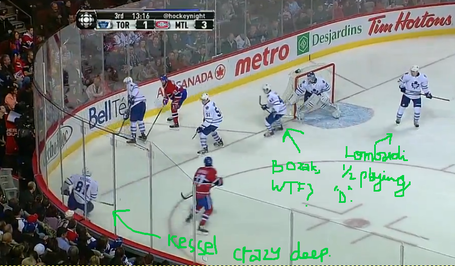 So Kessel goes way too deep to be of any use to anyone, Bozak is curling way too deep in some bizarre puck-watching daze, and Matthew Lombardi just stands in front of the net, covering no one and not available for a pass from anyone. Cody Franson winds up playing this puck around to Kessel, who has no option but to throw the puck out of the zone. Turnover. Rinse, wash, repeat. 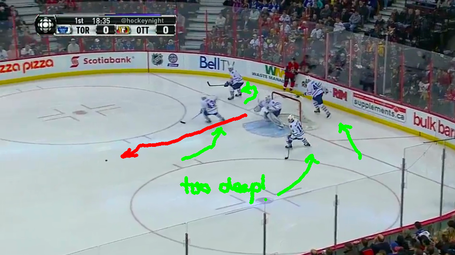 What a gong show. I shouldn't even need to draw arrows on this one. The puck goes deep in the zone, the D are too slow to get there first, and Nazem Kadri and Clarke MacArthur get puck-watching (thinking about "getting back" to defend with no more specific thought in their heads), circle down close to the goal line while the forechecking Senator sends this puck back up the middle of the ice for a good one-timer on net from an incoming teammate. Four Leafs are at roughly the goal line, worrying about regaining possession, and totally forget that another four Senators exist on the ice.

As you can imagine, after the shot and Ben Scrivens' save, this is how well-prepared the Leafs are to break out: 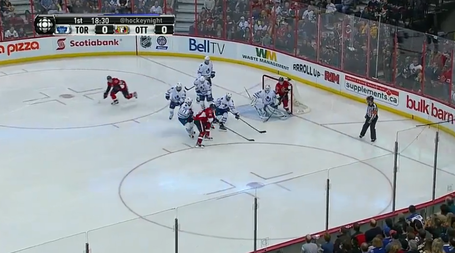 I mean, what the heck!? This looks like Tyke hockey. The "Flying V" doesn't really work, you know. FIVE Leafs clustered around the slot going "oh crap oh crap oh crap better block shots" is not a great breakout system. They may sweep away a rebound, but odds are the puck is coming right back in for another chance. Think about how important different types of zone exits are.

But Randy Carlyle Is A Brilliant Strategist!

I actually don't believe that Carlyle's breakout is much different than the one I illustrated at the top of this article. It's just that he's always on his wingers to go deep to help out (or maybe they just go there regardless of what he says) and this prevents the breakout from happening as I've described. In fact, below, we can see EXACTLY the breakout I drew out at the outset of this article being used by the Leafs as recently as October 5th of this year: 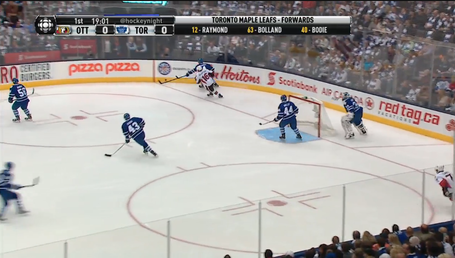 The strong-side defenceman (Franson) corrals the puck, the strong-side winger (Broll) waits for the pass at around the hashmarks, the center (Kadri) curls a bit deeper in case more puck support to Franson is needed, the weak side winger (Lupul) is curling higher, providing an outlet, and the weak side D (Rielly) is posted roughly in front of the net.

As a side note, Broll bungles the breakout, and Franson is forced to support his winger, eventually pushing the puck only as far as the red line, where the Senators pick ip up again. In any event, the strategy is there.

The point I'm trying to make is that it seems like Carlyle wants his group to break out in the way that I've described, but his coaching on defending the net seem to conflict with this type of puck movement coming out of the zone.

This is what the team looked like aaaall night against Chicago just a couple weeks ago on October 19th. Scared witless in the D-zone, clumping back below the hash marks, covering no one in particular, and running around in their zone for minutes on end, unable to touch the puck. 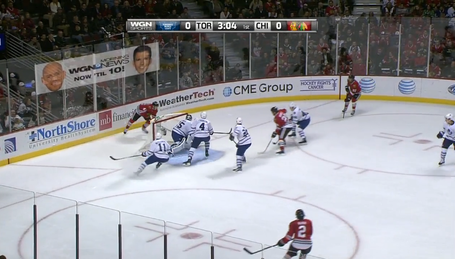 Incidentally, McClement wound up chasing one of the Hawks around the end boards to the hash marks, where he took a penalty for hooking - even if it was a bit of a cheesy one.

Yes, I'm basing my opinions on anecdotal evidence, and no, these examples aren't to be considered "proof" of anything. These examples simply illustrate what I feel is a larger trend with the Leafs' ability to defend in their own zone, which leads to problems breaking out, which, in turn, simply means the opposition has a lot more time with possession of the puck.

One might make the argument that Carlyle isn't coaching his wingers to chase the puck down low and forget their duties at the point or in the slot, and it's just that the players are incompetent, but these aren't exactly isolated cases, so I doubt it. Moreover, Carlyle is responsible for what happens out there at the end of the day, one way or another.