The Bruins didn't kick Tyler Seguin out the door, they handled it respectfully.

Share All sharing options for: Bruins Refuse to Slander Seguin

Tyler Seguin's return to the Garden ice Tuesday night with the Dallas Stars isn't going to prove anything about whether or not the Bruins were correct to cut bait with their young superstar.

This is in stark contrast to Phil Kessel: noted fat loser incapable of playing hockey who gave the Boston Bruins the most important player in the history of the sport Tyler Seg- wait hold on that's not the point they wanted to make.

Even if Loui Ericksson returns Tuesday, after suffering a concussion at the hands of Buffalo brute John Scott on Oct. 23, and scores a hat trick against his former team, it's not like chants of "Thank you, Seguin," are going to wisp from the rafters of the Garden in line with the way Bruins fans taunted Phil Kessel whenever Seguin displayed a flash of brilliance against the Toronto Maple Leafs.

Imagine turning Phil Kessel into Tyler Seguin and then decided that neither of them were as good as having Loui Eriksson around. Instead of chanting "Thank You Seguin" people at TD Garden should chant "When does baseball season start because you guys red paperclipped two young stars into a 28 year old". I guess it doesn't really rhyme.

That's not really the point of this though, it's been a while since someone lobbed a meatball up for the NNN and I've been busy with work and coaching a team. Check this out:

Even if Seguin didn't quite mesh with the Bruins' two-way system, you just don't give up on 21-year-old budding superstars, especially one that was the centerpiece of what was once thought general manager Peter Chiarelli's fleecing of the Maple Leafs when they took on Kessel in exchange for two first-round picks.

Ok, yeah that's what we were getting at. This is becoming a more reasonable take. Maybe Chiarelli didn't fleece anyone in the Kessel trade. Maybe it was a good deal on paper that went south due to bad luck.

But as witnessed in the first round of last season's playoffs, Kessel has clearly matured as a player, a status he's taken into this season, when he's fifth in the NHL in scoring with 18 points for the second-place Leafs.

That didn't stop numerous boring pundits from talking about his lack of heart previously. This is still a dumb narrative driven by dumb reasons. Kessel's a ridiculous player independent of his seven game playoff heroics for Toronto; he's a good player because of what he does in bulk over multiple seasons.

Despite Seguin's disappearance in the NHL playoffs this past spring, the trade that sent him and Rich Peverley to the Stars in exchange for Ericksson, Joe Morrow, Reilly Smith, and Matt Fraser on July 4 was still a jaw-dropper.

Despite his disappearance in the playoffs? Seguin took 3.18 shots per game in the playoffs, up 24% from his 2.57 in the regular season. Sometimes those shots don't go in, it's just puck luck. The reason this trade is a jaw dropper is because we spent years being beaten over the head with what a great GM Peter Chiarelli is and how dumb the Leafs were for ending up with Phil Kessel.

Generally if you double down that heavily you'd commit yourself to the growing pains of a player. For all that's written about the Leafs developing players poorly (get ready, the "Morgan Rielly is being rushed" stuff will start before December) they at least stuck with Luke Schenn's growing pains until they could trade him for a similarly aged player in James van Riemsdyk (who will likely outscore Loui Eriksson but that's not important).

Seguin, now playing center full-time, leads the Stars in scoring, netting six goals, as many as Bruins team leader Milan Lucic, and maybe his maturity on the ice is burgeoning before our eyes. But what an unmitigated disaster Seguin must have been off the ice, in the dressing room, and in team meetings for the Bruins to essentially package him to Dallas with Peverley for a package that many would probably consider grading a "B" at the end of the day.

The only people grading Seguin for Eriksson as a 'B' are currently wearing a yellow and black 'B' on their chests.

To their credit, the Bruins didn't treat Seguin's exit like the Red Sox did Terry Francona's in 2011, when cowardly allegations of pill-popping and other assorted behavior leaked, though there was probably plenty of material to do so.

What about the allegations of him needing a guard during the playoffs? What about the trumped up nonsense about him partying too much?

There are stories of a guard at his hotel room during the playoffs so he wouldn't sneak out to Daisy Buchanan's. There was the time he showed up for morning skate in the same clothes he had been wearing the previous day. There was his broken alarm clock, which may or may not have ever been fixed. There was reportedly a "Don't text her, bro," listing in his phone, and a litany of rumors of Seguin's off-ice activities.

Oh. He apparently knew about those things and wrote about them in the same paragraph. I don't purport to be an excellent writer, I mostly amuse myself by taking cheap shots at people, but even I see something hysterical about a paragraph that starts with "The Bruins wouldn't take cheap shots at Seguin after he left" and ends with "but here are some rotten things Seguin does that made him tradeable".

"Don't text her, bro" shouldn't qualify for "reportedly", for the record, given that Tyler Seguin literally took a screenshot of his phone and shared it with all of us on Twitter.

It took the Bruins three seasons to understand that he was a boy among men, far too immature to play the style Cam Neely and Claude Julien demand in Boston

Is this about Seguin or Kessel? Can you imagine carrying water on bad trades for budding superstars year after year? Why isn't there a single Boston writer saying "wait hold on guys, we wrote this same articles about Phil Kessel, maybe we should think a little harder about this".

On the other hand it makes meeting a deadline simple: 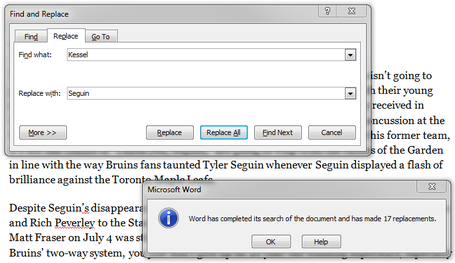 (Makes you wonder why an article about trading Seguin has 17 mentions of Phil Kessel and not one "it was a bad idea in the past, maybe it was dumb now.)

Here's the rest of the boys among men paragraph:

It took the Bruins three seasons to understand that he was a boy among men, far too immature to play the style Cam Neely and Claude Julien demand in Boston, or maybe it was simply that he was too young, not far removed from having his butt kissed for the better part of his lean years, and was simply unwilling to do as he was told, a characteristic that sort of leaked out when his Mommy tsked tsked the reporting of the guard at Seguin's hotel upon last July's trade.

Hold on tight for this. This Bruins writer is about to make the point that Tyler Seguin is a spoiled, entitled little brat because when the Bruins hack job started Seguin's mother didn't like it.

The hysterical part? Tyler Seguin's incredibly biased (and rightfully so, any of us would respond the same way to someone saying these things about our children, spouses, etc.) mom is, uh, right:

"That's crap. Oh, my God. That's stupid stuff. That's very unfair to say that. He's a professional. That makes me very angry," she told the Toronto Star. "You know what is happening? Boston is now trying to justify why they're getting rid of Tyler. Obviously, they don't want a fan backlash against Chiarelli.

To their credit, the Bruins didn't treat Seguin's exit like the Red Sox did Terry Francona's in 2011, when cowardly allegations... leaked ... .

Whether or not Seguin will wake up to that fact is difficult to say for a guy who could only legally drink as recently as 10 months ago. But think of just how bad it must have actually been for the Bruins to bid sayonara after 203 games in a Boston sweater. Eriksson and Reilly Smith may mesh better with the Bruins' distribution.

"We ran out of allegations after the playoff guard and the party and that one time we saw his cellphone. We're not trying to cover for Peter Chiarelli here in the media, but just imagine how bad things had to be behind the scenes for him to make a trade this bad. Did I say bad trade? I meant that Tyler Seguin is a bad person. Is that ok Peter? Is that what you wanted?"

Step one is Tuesday night, but frankly, it's going to be some time before Seguin learns to walk that talk.

Tyler Seguin's 15pts would place him first on the Boston Bruins.