Some of us enjoy beautiful things, Morgan Rielly creates them.

Panini, a hockey trading card manufacturer, has NHL rookies do a special series where they get a blank white card. The rookies autograph one side and make a sketch on the other.

One of the participating rookies was of course Morgan Rielly who had these to  draw: 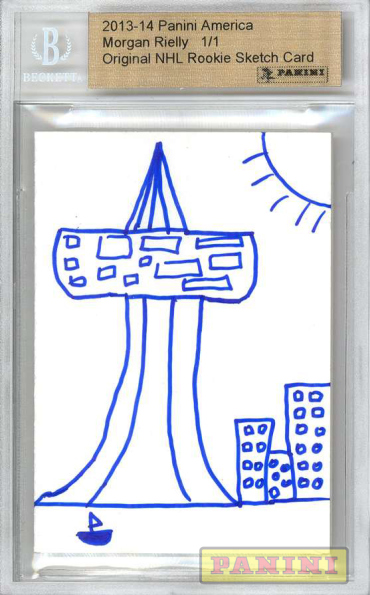 This appears to be the CN Tower, and a very accurate rendition of a boat powered by the number "4", which is Morgan Rielly's number. (He switched to #44 because of Cody Franson who doesn't even own a boat.) 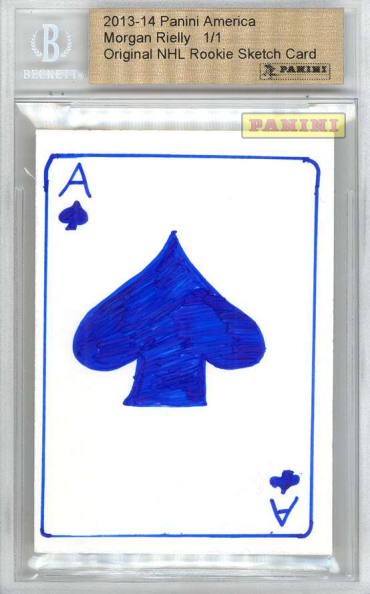 This appears to be a riff on a playing card that I'll entitle "The Ace of Mushrooms". Our exclusive source says that Morgan Rielly made the card blue because he'd never seen a blue card before.

Finally I bring to you Scott Laughton's, uh, "drawing": 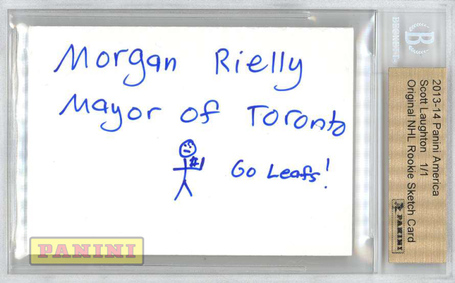 I don't think Morgan Rielly is an overweight crack smoker, and I hope the next time Scott Laughton plays the Leafs somebody straightens him out for this egregious insult.

Glove tap to Sean Gentille of the Sporting News for alerting me to these. You can follow him on twitter @seangentille.

A long time guy who doesn't follow me at all wrote in to clear the air about Scott Laughton:

@felixpotvin they are buddies and this was done before all of the Ford bullshit. Give your head a shake if you wrote that article

Due to the medically mandated halo I'm forced to wear I'm unable to give my head a shake. The entirely respectable and certainly intelligent Mr. Wagner continued his correction of our slanderous filth rag by adding:

On behalf of Pension Plan Puppets, I'd like to apologize for any damage this has done to the esteemable Mr. Wagner's feelings.