In response to demand for more systems analysis, what follows is a look at the most popular power play system in the NHL.

Most of you should be familiar with the 1-3-1 power play system, though perhaps it's worth pointing out that this is not to be confused with the 5-on-5 1-3-1 neutral zone defensive system that Tampa Bay is now so infamous for implementing.

On the power play, the Leafs haven't been throwing pucks at the net quite as often as we'd like them to, as the team is 24th overall in Corsi For at 5-on-4, but their shooting percentage sits at 6th in the league. Blah, blah, blah, small sample sizes and stuff like that. Let's set that aside for the moment and just look at what's happening on the ice.

The idea of the 1-3-1 system is pretty straightforward in that you can see exactly what's meant by just looking at the ice. One defender patrols the blue line, one man parks himself in front of the net, and three players (usually two forwards and one D, unless you're Boston) position themselves across the ice between the hash marks on the outside of each circle, with the middle player posted in the slot. As with any power play system, quick puck movement is important, with one-touch passing being the best way to twist defenders out of formation.

The advantages of this system are as follows:

- One man is always in front of the net, and the man in the slot draws coverage to the slot, causing lots of traffic for point shots. These shots may wind up blocked, but rebounds and deflections often cause the breakdowns necessary for a good chance on goal to materialize.

- As illustrated below, four triangles are effectively created, so that each player has at least three passing/shooting options. This provides a lot of support for whomever is in possession of the puck at any given time. Worst case scenario? Throw it on net. This leads to my next point...

- Although the half wall (where Kessel and Franson are in this screen shot) is not an ideal shooting location, shooting for a rebound or a tip makes it still worthwhile. What this means is, at worst, every shot towards the net stands a decent chance of going in or creating a chance. 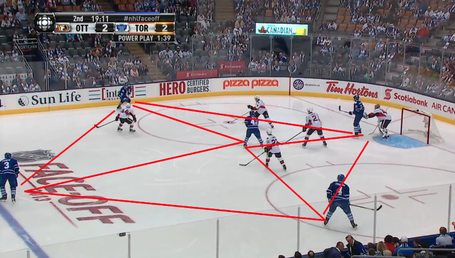 The main disadvantage of this system stems from having only one defender patrolling the blue line. An aggressive poke check from the defending forward playing high could result in a breakaway or an odd-man rush. Witness how Tyler Bozak used this to his advantage. In fact, Bozak loves this play. I mean, really. OK, really, the best example is the first one, but you get my drift.

The counter-strategy to the 1-3-1 is typically some variation of the diamond penalty kill, with one man high (trying to do what Bozak did in the videos I linked), another playing deep, either doing net-side positioning or fronting, depending on the coach (personally, I'm a fan of net-side, but most of that stems from Ron Wilson being such a fan of fronting, and his PK units were awful), and then the remaining two players trying to close off passing lanes for the attackers on the half wall. In the image above, you can see the Sens are fronting. Typically, the penalty killing forward going high will alternate with a linemate, because chasing the puck from side to side is exhausting, not to mention ineffective.

Every team has their own strengths and weaknesses, and every coach is going to tailor their power play accordingly. For the Leafs, the main threat is obvious: Phil Kessel. The Leafs like him on his off-wing (the left side, that is) on the half-boards. The players on the first power play unit will usually delay shooting or making any real play until he even gets to his spot. Interestingly, he sometimes still lines up on the right side, and has to make his way across the ice to get to his post: 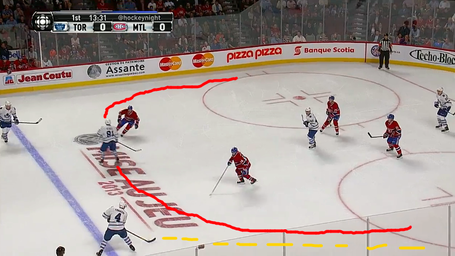 The faceoff was just won by Tyler Bozak, who goes right to the slot, while James van Riemsdyk assumes his spot in front of the net. Cody Franson wait to drop to the right side hash marks until Phil The Thrill has made his way to the other side. This is an odd strategy, but it may have something to do with some kind of set play the Leafs have in the event of a faceoff loss. It's also not quite so inefficient when the faceoff is on the other side of the ice because Kessel doesn't have as far to go.

Since making the point man your main pivot can be dangerous in the event of a bobble, the Leafs like to make Kessel their main focal point on the half wall. We all know how he loves to curl off the outside hash marks and rifle it from just inside the top of the circle.

In fact, on the first power play unit, all the players involved seem to fit their roles perfectly. van Riemsdyk is the biggest and strongest forward, so he goes to the net. Kessel is the best shooter, so he's off to the side, out of the heavy coverage, Franson has a quick whip of a shot, so he's the obvious choice to drop down to the hash marks, and Dion is always ready with a howitzer. Tyler Bozak is Tyler Bozak, so he's in the middle, drawing attention away from everyone else.

Here's another example of the exact same setup just a couple games later in Colorado: 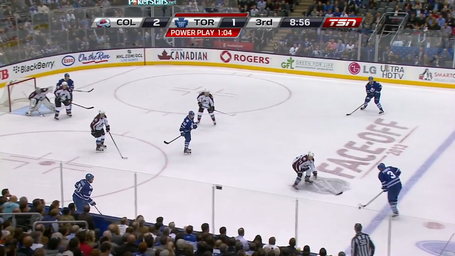 And again in Nashville: 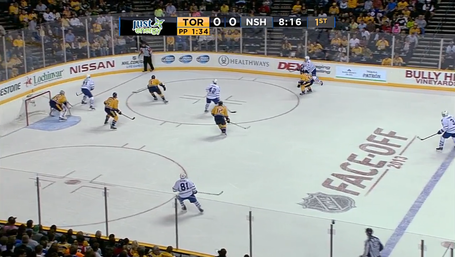 Now, if you just thought "OK, but couldn't you find multiple examples of this in one game?", you're right to ask the question, but the unfortunate truth is that the Leafs don't get this well set up on half of their power plays. In fact, a lot of teams don't. Such textbook formations are really only obvious under ideal circumstances. Often, most of a power play will be spent simply trying to break into the zone with possession of the puck. In fact, it took me until the fifth game of the season to see the second power play unit get into this formation (Paul Ranger is particularly cautious about moving in off the point), and even then, it was only a brief moment or two: 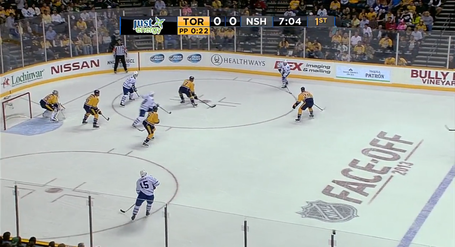 5-v-4 break-ins probably merit a post all on their own, but a quick note on how this is usually done is perhaps worthwhile. Most coaches know it's best to gain the zone carrying the puck in, and so do everything they can to hit the offensive blue line with speed. One of the simplest strategies is to pick a fleet-footed skater and have him trail the breakout, waiting for the initial puck carrier to draw coverage, and wait for a back-pass. 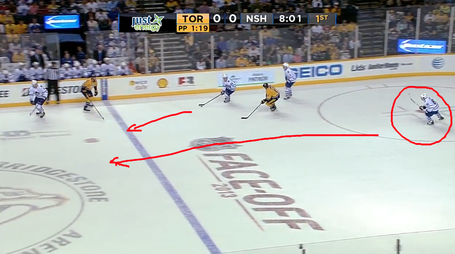 Bozak wound up finding an open JvR on this play, but Kessel was there for the drop pass, should other options have dried up for ol' Bozie on the rush.

Just for the record, things look a bit different on a 5-on-3: 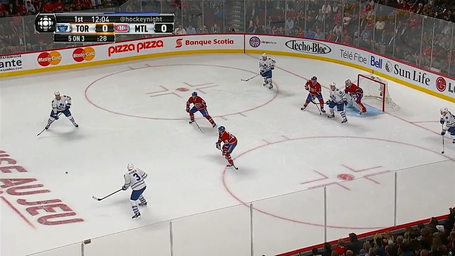 Here, Bozak is in front, while JvR and Kessel are off to the sides. The wingers staying so low stretches the gap between the penalty killers, which creates a 3-on-1 if the D can get the puck deep quickly. Montreal is using two guys up high on this one, so both Franson and Phaneuf remain on the point. The Leafs scored their first goal of the season shortly after I took this screen cap, as Franson and Kessel exchanged the puck on a set play, Kessel curling out and wiring the shot from the top circle, and JvR collecting the rebound. Just one of the ways this system can work well.