D'Amigo scores his career first, Lupul puts up a four point night, and Holland netted two. It was a fun night to be a Leafs fan.

Share All sharing options for: Leafs' Skill Soars Past Blackhawks, 7-3

Carlyle let the skill players play, and oh my did they. Peter Holland hit a career high of 19:12 TOI, and put up two goals and one assist, as linemates Joffrey Lupul and Mason Raymond went 2-2-4 and 0-4-4 respectively. Jerry D'Amigo got his first career NHL goal (and a great second assist on the Kulemin goal), and Phil Kessel capped off the scoring for the Leafs. Enjoy the game in six - I might just watch it again for kicks:

This game was fun to watch. The depth players were productive - in Holland's case, it was in spite of being outchanced, but Jay McClement did a great job considering his line was matched up against Jonathan Toews'. As usual, the Leafs were playing with 9 forwards - FML/Smith/Bodie played under 4:40 each - but the extra time going towards Holland (rather than overloading Nazem Kadri and Jay McClement) worked out nicely - the Leafs even ended up outshooting the Hawks.

Carl Gunnarsson and Dion Phaneuf saw roughly 13 minutes of ES TOI (plus two SH and four PP minutes for Dion), John-Michael Liles and Morgan Rielly were outposessed, but Jake Gardiner and Cody Franson played well against Patrick Kane's line. It'll be interesting to see how Carlyle starts rolling with the defense in the future, but I'd really like him to try out the Gardiner-Phaneuf pairing, especially if both players are allowed to jump into the rush.

The Leafs' goaltending got the job done - and was probably the biggest thing separating their roster from the Hawks' - but I do want to mention one thing that's made an impact in two of the Leafs' last three games. I'm calling it "VHWTF": 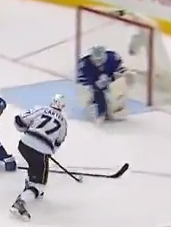 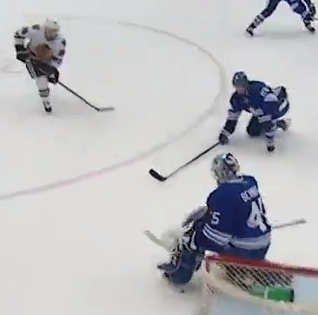 In both cases, these were 2-on-1s. I'm not sure if Jonathan Bernier's keeping his outside leg loaded to push off in case of a pass or a rebound, but it's twice now that he got caught for a poor save selection (or cheating to the far side, if you want to look at it that way). Both of these still shots resulted in goals against, and in my mind, short side and five hole goals aren't okay at this level. At the very least, it seems pointless to hedge for the rebound if you aren't going to make the first save anyways. I'll keep an eye out for it going forwards, mostly because I'd like to see it gone from Bernier's game - or at least find some cases where it pays off.

Anyways, Carlyle iced a fun lineup, the Leafs won a great game against a tough opponent, and 24/7 aired for countries that weren't getting shafted by Sportsnet. It was a great night for the Leafs. Next up, the Pittsburgh Penguins on Monday night - the first half of a back-to-back. Go Leafs go!