'Inconsistent' is one way of describing their work in this regard.

For a bit of background on this discussion, check out my post about what San Jose did to the Leafs. After that post, there was some interest in reading about what the Leafs do, so here goes.

The Leafs generally don't look great in this regard, but have definitely shown flashes of competency. Of course, they have to get out of their own own zone more often to really showcase what they can do.

The Leafs' first few shifts against Chicago showcased some really great forechecking ability, and in this particular instance, practically hemmed the Hawks' top line into their own end. In fact, in the following screen grab, Jay McClement gets right on Marian Hossa's case. As soon as Hossa has received a breakout pass, his time and space are limited, and Carl Gunnarsson is closing the gap along the boards, and McClement closes in at an angle that limits passing options. 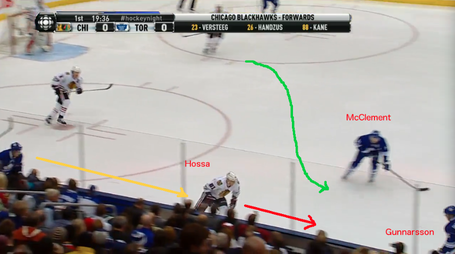 Next shot: the gap is closed, McClement collects the puck after a poke check, the Leafs re-group in the neutral zone, and are back in before the Hawks' line can change. 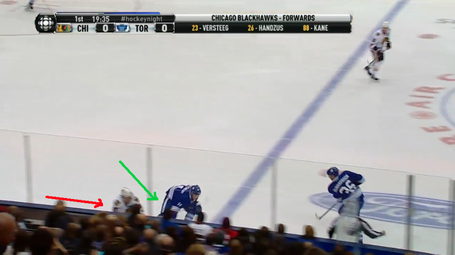 Perfect. The Leafs had the Hawks running around quite a bit in the first few minutes and managed to squeeze a couple of power plays out of all this pressure. There wasn't a call on this play (the first one came minutes later with Nazem Kadri curling in the Hawks' zone), but that's how you do it.

The Bad - With A Good Recovery

Coming out of the Hawks' zone, Joffrey Lupul gets caught forechecking deep and laying a hit (which is OK - one man going deep can be a good thing), but Peter Holland and Mason Raymond are just too gassed to keep up with the Hawks' forwards, who are charging back the other way. Toews has passed puck to Kane, who is in flight. Raymond could conceivably still get back into the play here, even though he's a bit behind it. 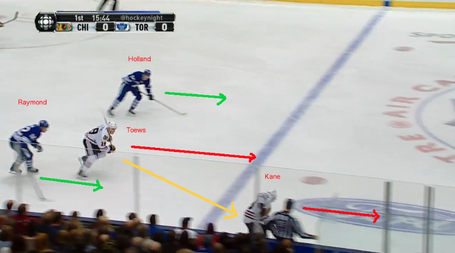 Three or four strides later, Raymond is right out of the frame, and although Holland is keeping up, he hasn't managed to get in a passing lane, and has been passed by Toews without picking him up. The Leafs' D are doing nothing to cut off passing lanes (shown here by the white line) and their gap control says "I'm surprised how fast these guys are". Of course, seeing their forwards failing to backcheck, they're probably worried about getting beat around the outside by the far guy on what is now a 3-on-2. 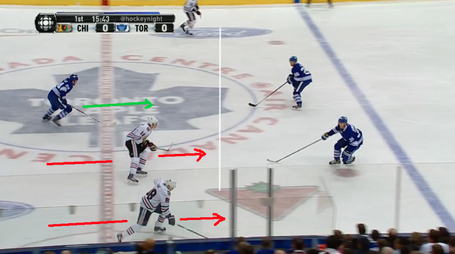 Fortunately, Holland shows good defensive awareness just a second later in doing three great things: first, he simply notices the far-side attacker. Second, he points to him, and calls out to his D that he'll pick him up (great communication), leaving them to focus on Toews and Kane. Third, he continues to skate with everything he's got left to get into the passing lane (see next frame). He's late covering the passing lane (again, in white), but Kane still has room to skate, so he does. 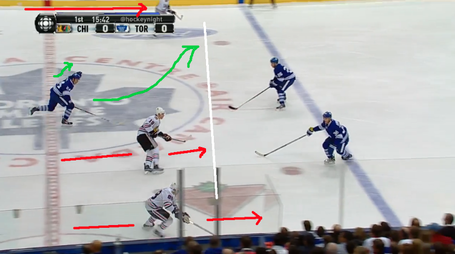 Naturally, Patrick Kane and Toews gain the zone with speed, and though the gap is now closed and Holland is back in a lane, these are not the two players you want to have flying into your zone with possession of the puck. This play went from a routine breakout to a dangerous rush (by dangerous players), and although Holland's great work takes away the 3-on-2, the Hawks gain the zone easily. 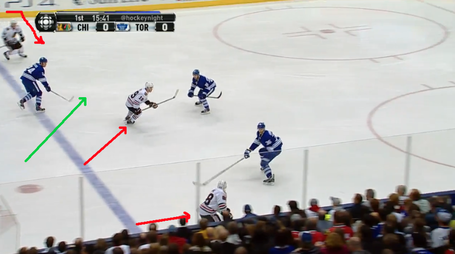 Above, Jonathan Toews is trying to stretch the Leafs' D out, but Gunnarsson's good stick is preventing a pass. The far-side attacker had to curl in to 1) not be off-side and 2) try to sneak behind Holland, but Holland is doing good work, here. As it turned out, Kane slammed on the breaks and looked for passing options and found Toews down low, but the Leafs' coverage was good, and a counter-attack was soon on its way.

1) Raymond is way too tired/lazy to keep up with either Toews or Kane and arrives late back to his zone. Raymond is pretty well known as a quick skater, so I don't think it was simply that he was getting burned.

2) Holland has to slam on the brakes at the far goal line and skate like mad to get back. He calls his man on the far side and picks him up as he enters the zone. This is a bit late, but he communicates well with the D, and he helps close off what would have been a 3-on-2. Great work by Holland.

3) The D were playing the rush cautiously up to that point, and had to cede the zone for fear of being out-flanked by the third Hawk. Kane gains the zone easily with a full head of steam. You hate to see Toews and Kane get such time and space, but at least this one didn't wind up costing the Leafs. There is a brief possession time, but the Leafs changed back out of their zone within a few seconds.

The Leafs really aren't in bad shape on this rush, except for the fact that it's their fourth line and that's just generally bad news. First off, screw Troy Bodie for going for THIS line change. His replacement has no hope of getting into the play in time to join the defense of the rush. Next, we have Fraser McLaren, who watches the puck carrier go by him without giving him any kind of BSP. The Hawk steams by him. At least he has the wherewithal to pick up a man he can keep up with. Trevor Smith is backchecking and working hard, but isn't in any kind of passing lane. John-Michael Liles notices that no one but him is going to apply pressure to the puck carrier, and steps up to close the gap. So basically, the Leafs apply ZERO BSP despite originally being in a position to do so. It gets worse. 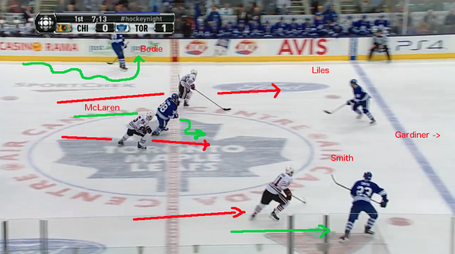 The next frame shows things on the cusp of getting disorganized. Smith has now completely turned his back on his man (instead of trying to keep himself between his man and the puck), McLaren still more or less has his guy, but is now getting beat, and though Liles has closed the gap, the Hawks have gained a controlled entry into the Leafs' zone. Also, why is Gardiner running away? I guess I could stop here (since from here this play is about lapses in defensive zone coverage, not neutral zone BSP), but I think it's useful in this instance to show the outcome. 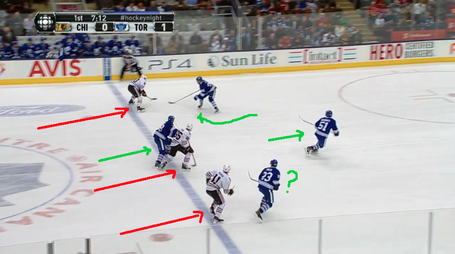 Next, we have Trevor Smith skating in a totally different direction than his man while John-Michael Liles is doing his best to tie up the puck carrier and needing some support. Smith's man simply swoops towards the strong side and picks up the puck. Frazer McLaren's man has passed him, and appears to now to be Jake Gardiner's responsibility. McLaren is now not covering anything. 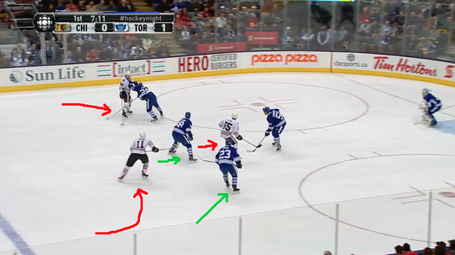 You just know this is going to be good. McLaren is now trying to rough up Liles' man while Smith hopelessly chases his lost check around the pile. McLaren has completely forgotten that he should pick up a trailing defenceman. Gardiner and Liles are doing what they should be doing here, but that's it. Still no sign of fresh legs from the bench. The circling Hawk gets a short-range, sharp-angle shot and comes in for a whack. Luckily, Bernier smothers the play, because the forgotten trailing D-man has an open net if there's a rebound. 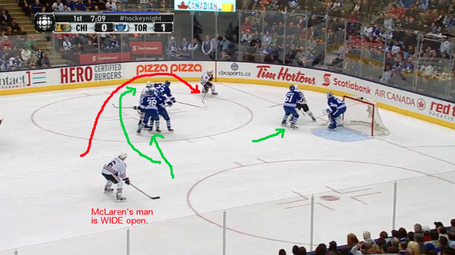 2) McLaren lost not one but two men on his way up the ice, and forgot about a third.

3) Trevor Smith never put himself in a passing lane and then completely turned his back on and lost the soon-to-be shooter.

4) The Leafs' D does their best to stem the bleeding, but they're outnumbered.

When BSP is applied correctly, everyone has to do a lot less work. When done effectively, it causes turnovers using some hard skating, simple angles, and taking away passing lanes. We hear these words being used by coaches and by broadcasters on the air, and often they come off as platitudes, but what I've shown here are some concrete examples of how those things can be used.

The Leafs are capable of doing this to varying degrees, but it requires two main abilities: 1) good skating and 2) reading developing plays to anticipate how to apply coverage if you're not following the puck carrier. Some of those fourth liners...