We're going to support our SBN and internet brethren in raising some money for their local hospital! Find out how and take part!

Share All sharing options for: Winter Classic 2014: Raising Money For Kids With Cancer

The PPP community is well known for a lot of things amongst hockey fans. From our mischievous hijinks to being a place for Leafs fans to dissect the team (unfortunately not literally sometimes) to our clashes with the local media. However, the best thing we do around here is raise money for those that need it. Our members have always found a way to give whatever help that they can and thanks to our numbers I like to think we've been able to change some lives. We've raised money for earthquake relief in Haiti, orphans in Colombia, youth hockey in Toronto, tutoring in Boston, and disadvantaged children worldwide. And we've raised the money through everything from commenting challenges (good lord, remember!?) to CanadaBest gear to simple donations. Every time we've asked, you guys have stepped up in a big way. My rough math puts us at over $9,000 raised.

Our friends at Winging It In Motown and in the Detroit blogosphere (the Delvecchiosphere? Gordosphere?) also have a generous streak and they've asked us, along with a number of other teams, to help them in fundraising in the lead up to the Winter Classic. They have a fun way of raising money during games and I'll let @jennyquarx explain:

In the past, the bulk of the money we have raised comes from the pledges. You can pledge whatever you want but if it's something ridiculous, we ask that you keep track of it (every time Stevie is spotted is a popular one for the Tampa Bay games and like I don't want to be in charge of that). It works better when it's something tangible like $20/Phaneuf point or something. Pens fans were super generous and I had a lot of $50/Crosby point which was extraordinarily helpful. It doesn't have to be huge either, every little bit helps. We have donated nearly $20k to The Children's Hospital of Michigan Foundation since 2010. The fund designation that we give to is the Child Life Fund. This is rad because kids that are extremely ill have to spend so much time in the hospital that it is hard for them to get to be kids. Our fund pays for things like games and video games and other fun things to help kids feel like KIDS when they're going through all this really grown up stuff.

You can sign up at this page over at The Production Line which will explain the process some more but it basically boils down to this:

It makes things easier if you choose something that gets tracked via RTSS stats - and yes you cheeky bastards you can do it based on corsi, fenwick, etc - but you can also do things based on the broadcast (how often Hughson mentions Vancouver or how often Grapes hits the table with both hands) so have some fun and remember that every penny helps. Once you've signed up, toss in your pledges in the comments so others can get ideas and we can check them out in the game thread Saturday night.

Jenny and her husband have been blessed with a son that walks in the light of our Dear Wendel (pictured below reminding his father not to speak ill of the Buds) and they've graciously donated this hand drawn picture of Dougie to the person that ends up making the largest donation. I've got about a dozen NHL/Leafs related books that I'll raffle off among the people that make pledges as well. 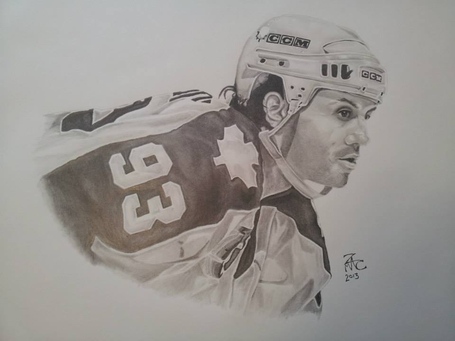 You could win this! 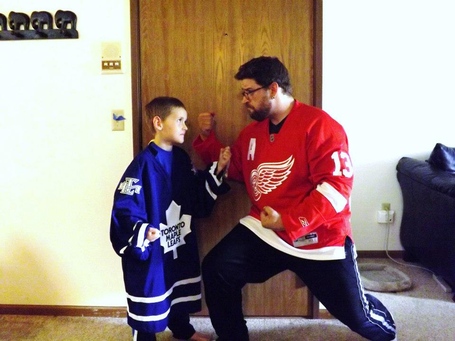 Our donations will help kids that are going through an unimaginably difficult time have the ability to escape their situation for at least a little while. We're a creative bunch so let's see what we can do to help.