The Sharks' forwards were one reason the Leafs had a hard time gaining the offensive zone.

Just to make sure we're all on the same page, let's go over what backside pressure means. It's not simply the same thing as backchecking, as Greg Millen (on his blog at the official Leafs site) might have you think. Backside pressure is what one backchecking player is doing to the puck carrier while attempting to defend a rush.

Backchecking is a general term for any forward making his way back to his own zone while the opponents rush towards his end. It used to be that players would simply put their heads down and "get back" to any ol' spot on the ice where they figured they might be lucky enough to intercept a pass or take away space. Let the defencemen play defence, right?

Almost any hockey team you're going to see on TV is going to employ much stricter strategies about 'getting back'. Backchecking today means picking up a man as you head back towards your own zone and reading the play as you go. Keep yourself between your man and the puck, and eliminate him as an option for the puck carrier.

Backside Pressure is more specifically about the puck carrier. Instead of simply waiting for defenders to "seal off" an attacking player at your blue line, forwards are now expected to apply pressure on the puck carrier from the second he starts moving towards your zone. The puck carrier should be adequately bothered so that they don't have enough time to dump the puck in, make a pass, or simply waltz across your blue line with the puck. Ideally, if you're a winger applying backside pressure, you can even angle off an attack in the neutral zone, before the puck goes deep into your end, creating a turnover. Nip at the attacker's heels, give him a few taps on the back of his legs with your stick (one handed, of course) just to let him know he doesn't have any time. Make him panic.

A much more detailed version of these ideas can be found on this site, where the head coach for BSU expands on my skeleton ground rules.

The Sharks are really good at this.

Certainly, the Sharks were able to choke out many of the Leafs' rushes in the first period and turn the puck the other way, but what impressed me most was their ability to make backside pressure a part of a defensive shell system.

The Sharks were up 3-2 and had been handling the Leafs with relative ease for most of the game, and knew that they could wait for the Leafs to make mistakes before taking another chance. They had the lead and their opponents had a very young defence corps, and forwards with speed to burn, so why not play it safe? Unlike the Leafs, who get bottled up in their own end, the Sharks managed to challenge for the puck in the neutral zone, much further from their own net, which is a much safer strategy, if you ask me. How?

There are a number of issues at play here, including the San Jose forechecking strategy and the way they kept sticks in passing lanes in the offensive and neutral zones. As Carlyle pointed out, they lined a three or four guys up at their own blue line if they could to head off rushes. This forces a lot of dump-ins, which we all know isn't the most effective way to generate scoring chances, especially if you're the Leafs. But when the Leafs rushed from their own zone, San Jose forwards often had to chase them (i.e. apply backside pressure), and they did so very effectively. So really, backside pressure is just one cog in a defensively-oriented system, though I should perhaps point out that forwards are expected to do this every single time while defending a rush, no matter the situation.

Exhibit A: Choke off the rush in the neutral zone

1. Jay McClement has just received an outlet pass from Jake Gardiner, and already a Shark is on him, angling him towards the boards. Nikolai Kulemin is skating, wide-open down the middle of the ice, but the Sharks have numbers, so Kulemin isn't of any great concern. You can see the Sharks' defencemen on the near-side is already adjusting his angle to make contact with McClement if he makes it to the blue line. The defending forward checkign McClement has his stick well in the passing lane. 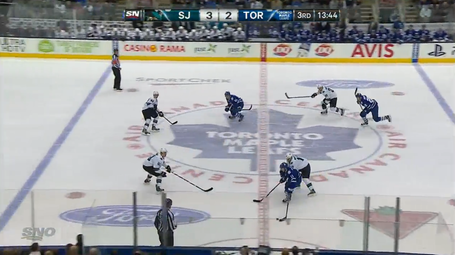 2. McClement tries to dump the puck in as he hits the blue line, but a well-timed poke check by the Sharks' forward applying backside pressure prevents the puck from even entering the Sharks' zone. The forward continues to steer McClement away from the puck. 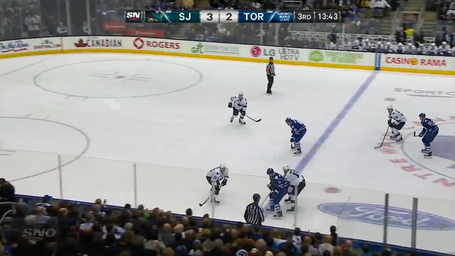 3. The defenceman picks up the loose puck, it's a turnover, and Kulemin and McClement are caught going the wrong way. Fortunately for them, the puck bounces off the boards at a funny speed, and they are at least able to clear the zone before the Sharks counter-attack. 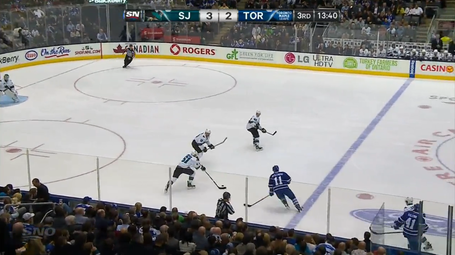 Exhibit B: Force the dump-in

1. After a slick poke check by Dion Phaneuf, David Clarkson picks up the puck, and starts rushing from his own blue line towards the Sharks' end. Guess what? The second he picks up the puck, there is a Shark player chasing him. There is no time or space anywhere on the ice for the Leafs. 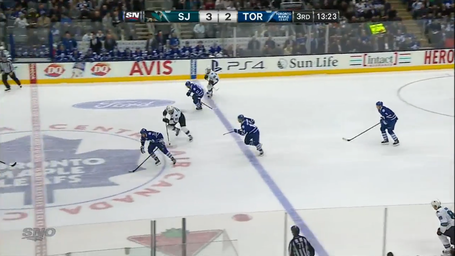 2. Just like McClement did just seconds earlier, Clarkson looks for "soft ice" - in other words, an area with less coverage so he can pick up some speed. Like I said above, the forward has one hand on his stick and is giving Clarkson just a bit of trouble from behind. The forward hasn't caught Clarkson, but the Sharks' defence is closing the gap, angling just like in the shot above with McClement. 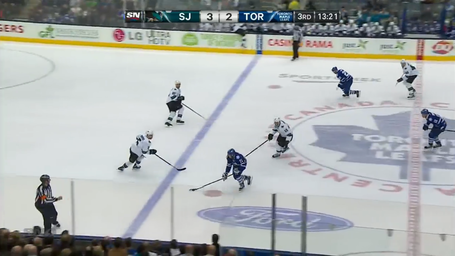 3. Here, Clarkson actually gains the zone because the forward hasn't caught him, yet. That said, the Sharks' forward has applied enough pressure to force Clarkson to the wing, right into the trolley tracks of the D, and Clarkson is forced to slide the puck in and chase it. The Leafs managed to touch the puck once or twice in the zone after this, but the Sharks had it our relatively quickly. 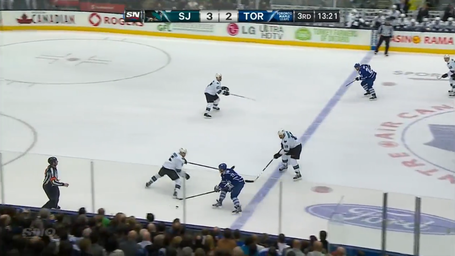 So although in this case, the backside pressure didn't stop the rush in the neutral zone, the forward still had to cough up the puck and/or get drilled. This, at worst, disorganizes the attack and makes for an easier breakout, and at best results in a turnover. Textbook stuff.