Leafs Back To Their Winning Ways: Goaltending

Share All sharing options for: Leafs Back To Their Winning Ways: Goaltending

I didn't watch this game because I was just too tired to wake up for a 1 a.m. start in my time zone. Let's see if I can guess how this went based on a couple online resources. 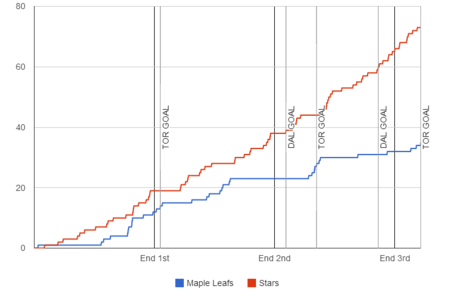 By the looks of this chart, the Leafs played some OK hockey through the first half of the game. Not great, but OK, considering it's the Leafs. Then, everybody checked out and went home, and Dallas was left to play against Jonathan Bernier. The Leafs were called back to the ice for a few shifts in the third, but cocktails were served, and they could only be expected to focus on hockey for so long. Trevor Smith remembered there was a game and puts one home in overtime.

Man, those shot totals. Last night was the 8th time this season the Leafs allowed 40 shots or more and the Leafs sport a 4-2-2 record in those contests. They now sit well behind Buffalo in shots against per game, which of course, means that the Leafs are last in the league in this regard. The thing about that is... Jonathan Bernier happens. Can you IMAGINE what this would be like with Toskala in net?

Nazem Kadri picked up a pair of goals, and Extra Skater tells me he was one of the better Leafs on the ice last night. This is great news for everyone but Tyler Bozak.

Cody Franson appears to have had a better game while recent Corsi heroes David Clarkson, Mason Raymond and Paul Ranger had a tough night. I mean, 18.8% CF? It's only one game, but yikes. Maybe Raymond and Clarkson missed Kadri more than we thought they would?

Jerry D'Amigo played a great four minutes. I hope he sticks around.

The NHL's Box Score tells me that Tyler Seguin played over 21 minutes last night and he collected 0 points and was a -1. Moreover, he was a "mere' 61.1% CF. Maybe he'll think twice about getting traded for Phil Kessel again.

In his post-game press conference, Randy Carlyle talks about getting more zone time and seems to understand this his team isn't 'out of the woods', but show me the money, Mr. Carlyle. To his credit, he also pointed out that the Leafs haven't been particularly unlucky with regards to injuries, and doesn't want to use that as an excuse. OK, then.