Disclaimer: I couldn't watch this one, either. If you think my guesses about how this game went based on a few numbers are off-base, have your say in the comments.

Looking at SkinnyFish's lovely Badvent calendar, last night's game was one of those you might have penciled in early as a 'loss'. Sure, that's exactly what happened, and although the score final didn't make it look like a close game, the numbers tell a slightly more heartening tale: 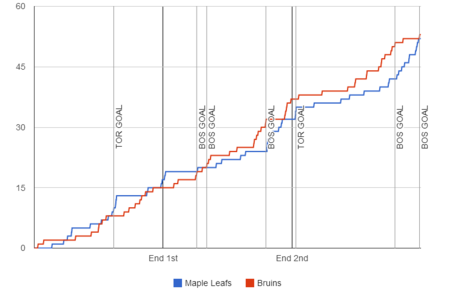 Would you look at that. Nearly even Fenwick attempts. This just doesn't happen very often against the Boston Bruins, so let's call this one a moral victory. The Leafs, having trailed for much of the game, probably should have numbers that look better than this, but at least they didn't get totally trampled and allow another 50 shots. OK, small moral victories.

Let's see what Randy Carlyle had to say:

Glancing at the Extra Skater numbers tells us that most of the team had a good night in terms of possession stats, but that Dion Phaneuf had a tough game. That hit from behind on Miller was ugly, too. In fact, Phaneuf hasn't been great for a little while now, and I would speculate that he's becoming run-down from the heavy minutes he's been handed, always against top competition. I'd like to think that he can recharge his batteries a bit come time for the Olympic break.

Here's the box score. 38 shots against is still pretty nuts, but at least the Leafs had 32 of their own. The penalty kill is starting to look awfully Ron Wilsonian, wouldn't you say?