In a game full of strange incidents, the strangest is probably the alleged bite that Mikhail Grabovski is supposed to have made on Max Pacioretty. Was there a bite?

In a game full of heated incidents, the one that drew the ire the most from the Montreal Canadiens and their fans was the alleged bite by Mikhail Grabovski. You can see how riled up it got those 'classy', 'knowledgeable' fans in our helpful gallery. The reaction had a lot of certainty on the part of the bleu, blanc, rouge, et triste about what happened and most of them pointed to the video as absolute proof that Grabovski bit Pacioretty.

Therrien on Grabovski:"I saw the bite. It's clear on the video. I'm sure that the league will pay attention to that." #habs #leafs

The amount of leafs fans that deny that grabovski bit pacioretty...I'm sorry but who the fuck r u. He clearly did

The translation for the French there is *checks dictionary.com* and I quote "bloo bloo". And Sean Gordon made another appearance with his certainty:

Video replays suggested Grabovski should indeed expect a call from the league to discuss inappropriate deployment of his chompers.

The funny thing is that Sean Gordon covers the Habs for the Globe and is the exact kind of homer that poor James Mirtle is accused of being. RDS' French broadcast also had their announcers saying the same thing: "le video prover que Grabovski est le kind of bastard nous avons run out of Montreal!" But there must have been a voice of reason somewhere:

Can't actually see Grabovski bite Pacioretty, but you can see where Pacioretty's hand was in his face, then he pulls it away shaking it.

There we go. Now, I'm willing to be that when Max Pacioretty put the crippler crossface on Mikhail Grabovski that he didn't hurt himself just from trying to separate Grabbo's jaw with his forearm. We love Grabbo but let's be frank: dude is crazy. He talks about having fist talk with the Kostitsyn's, he referred to what were certainly concussion symptoms as a pain behind his eyes that he had to work through, he posed for these pictures, and he always tries to kill anything related to the Habs. If I had to guess at what he would do when presented with Pacioretty's cheap intervention I would place money on 'bite the fucker and teach him a lesson'. I mean, it's not like he had just been on the receiving end of a cheap punch from noted 'tough guy' Brandon Prust. The atmosphere was charged to say the least.

The other thing that is also painfully obvious was that despite Pacioretty's frantic pursuit of the referees they did not feel there was any evidence of a bad bite. What likely happened was enough pressure was applied to get Pacioretty let go. We'll see if it goes in the ref's report and whether the league does anything but based on the evidence presented and their reaction I'm dubious as to whether anything will happen. 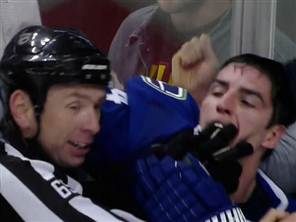 This is clear video evidence of a bite
Note: he didn't get suspended

Now, to be clear since I know Habs fans might not be able to understand this post: it's not acceptable to bite but I'd bet that honest people would admit that they'd likely do the same in that position. And what is just brutally obvious to anyone that isn't making assumptions or blindly supports Montreal is that the video definitely does not show a bite at all.

Toronto Maple Leafs forward Mikhail Grabovski faces a hearing with the Department of Player Safety on Sunday afternoon for an incident in Toronto's 6-0 victory against the Montreal Canadiens on Saturday night.

I'd pay to be at this hearing. "Yeah I bit his arm and I hope he burns in hell!"

Grabovski hearing postponed to 11 am Monday. Canadiens did send in pics of Max Pacioretty's forearm. #dna

Well, we'll see. Kind of weird that it took them so long to get a picture to the league but presumably it'll show something definitive.